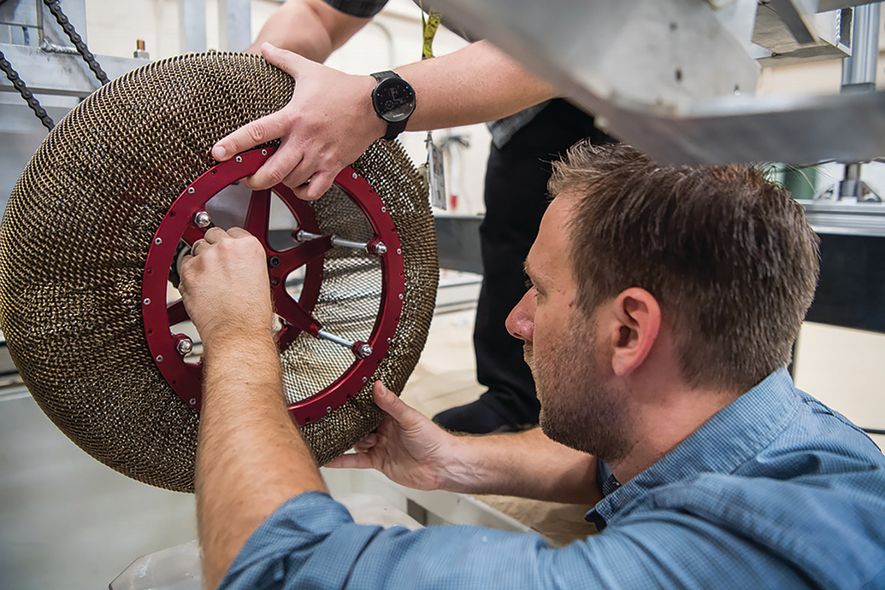 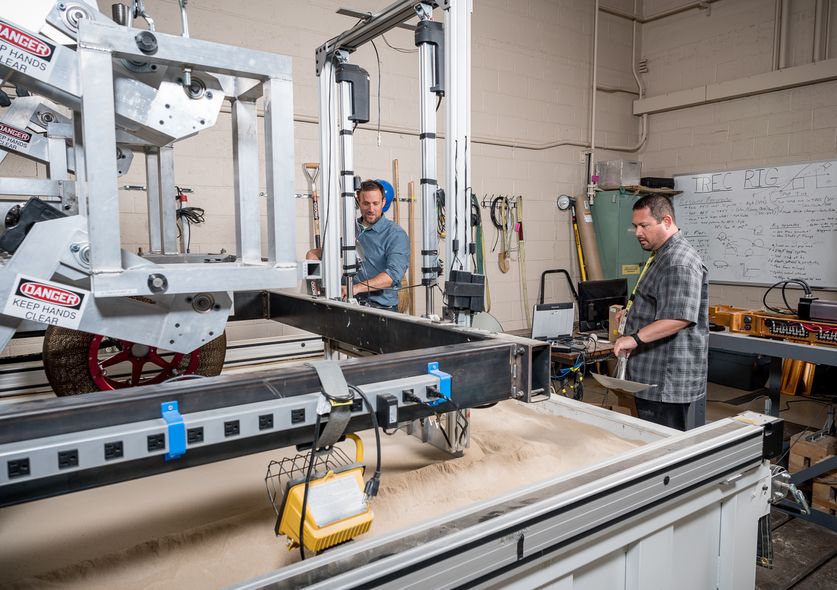 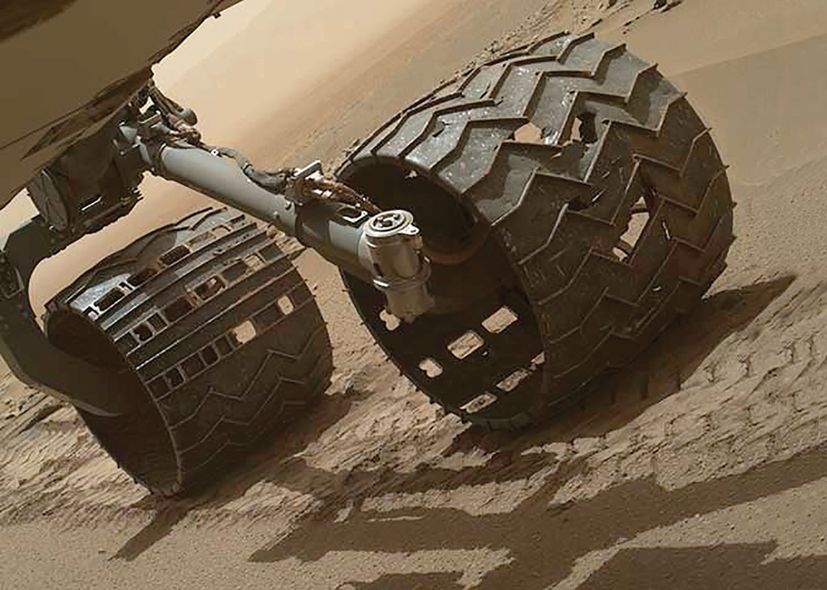 A little over a year after the Mars Curiosity Rover landed on Mars, engineers began to notice significant wheel damage in 2013 due to the unexpectedly harsh terrain
Share 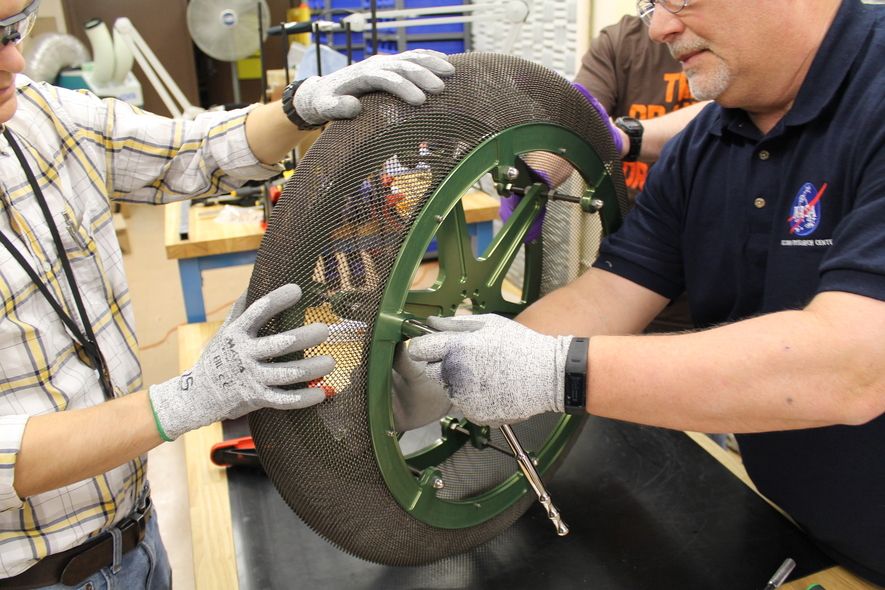 Engineers at NASA work on a tire for Mars.
Share 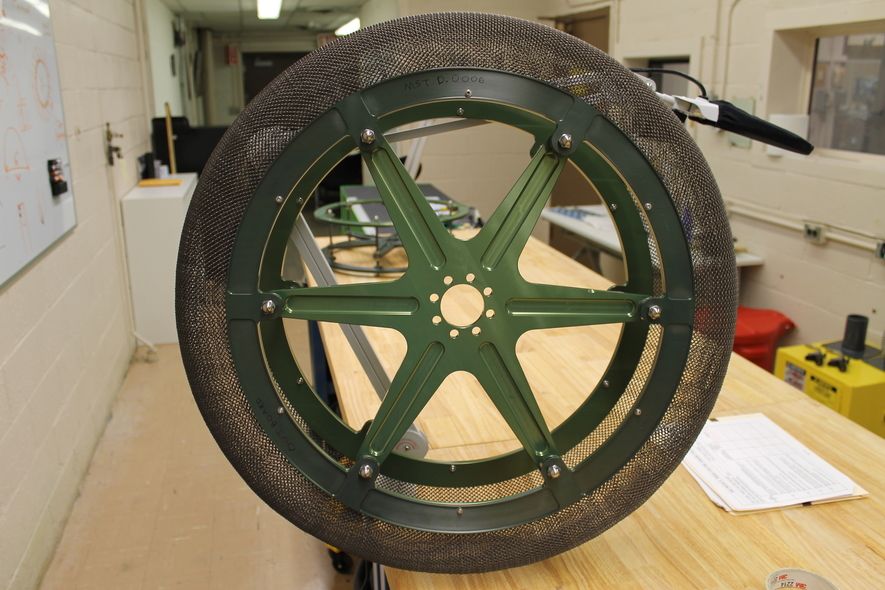 This tire is designed to handle the rocky terrain of the Red Planet.
Share 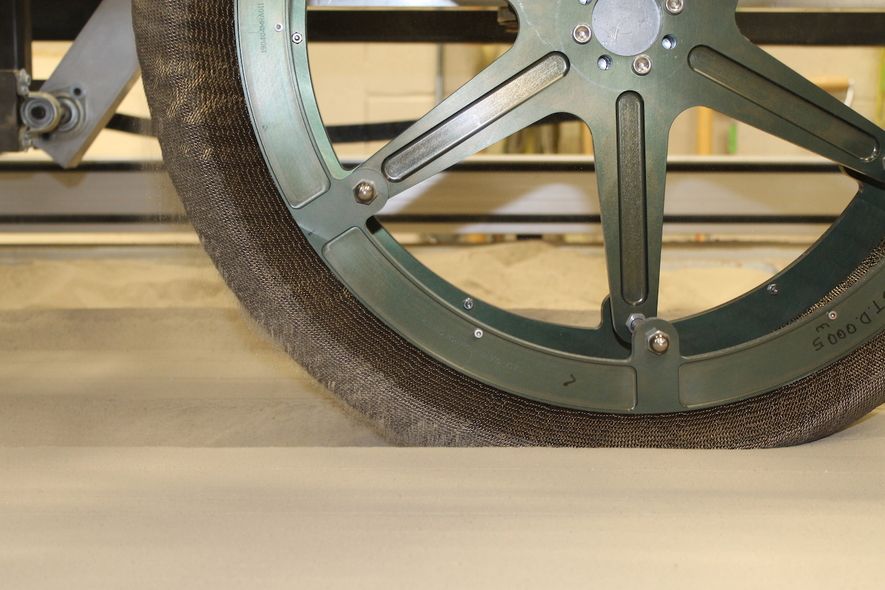 The new tire designed for Mars' surface can adjust to any terrain.
Share 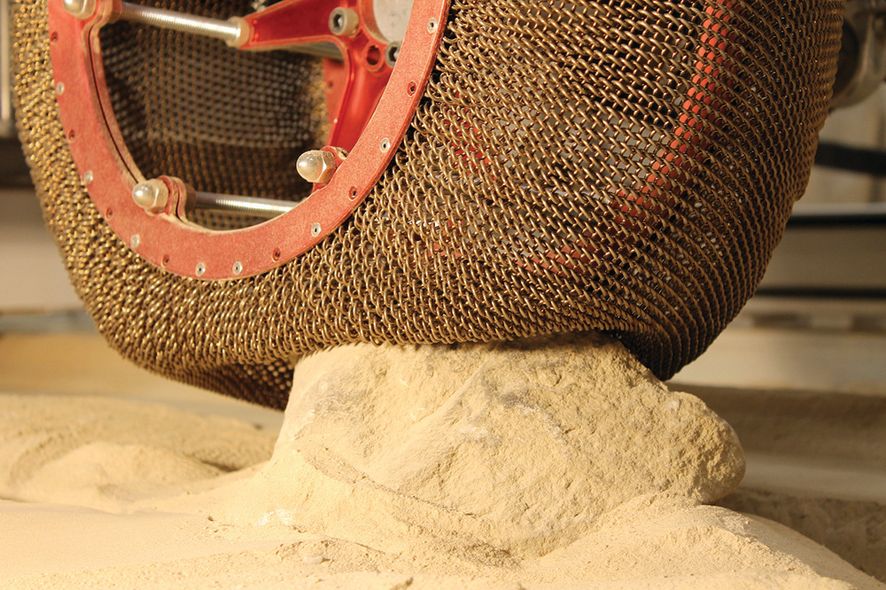 The tire designed for Mars can take on rocky surfaces without trouble.
Share 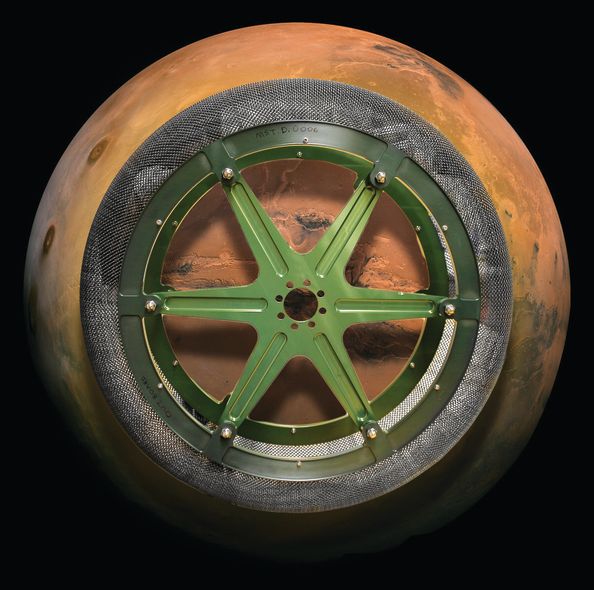 CLEVELAND—While NASA's newest tire is the result of years of research and development, it was a chance meeting between old colleagues that moved it from a unique R&D project to a key piece of an upcoming mission to Mars.

And while the launch date is years away, the practical uses of the technology already have emerged on the consumer market.

Eyes on the moon
In the mid-2000s, engineers began working on a new tire concept as part of the Constellation program. The aim of the program was to put humans and machines on the moon as a steppingstone to Mars.

While that program eventually was phased out, a new iteration, Artemis, was formed to build a rover for humans to use over long periods on the moon.

The team looked back to the Apollo moon missions (15-17) in the early 1970s for guidance on a tire. They were able to see the original wire-mesh tires from the Apollo Lunar Rover and talk to some of the engineers involved.

"In space, you have a lot of unique challenges to deal with; you have temperatures. On the moon it can get down to minus-200 degrees," Colin Creager, a NASA mechanical engineer working on the project, told Tire Business.

Rubber won't work in those temperatures: The pressure is too low and there's a lot of radiation, he said.

For the Mars rovers, NASA found that using a special type of "passive" suspension and a rigid wheel was the most effective way to avoid those issues.

But because the focus of the project was transporting crew members on the moon, the team knew a rigid wheel was out of the question.

"You couldn't have people driving around at 20 mph on clunky, metal wheels. It would be very inefficient, uncomfortable and would probably take a lot of damage," Creager said.

In 2009, Goodyear and NASA introduced a spring-steel tire designed to carry a heavier load over a greater distance than the Apollo wire mesh tire. Unlike the Apollo construction of straight wires woven together, these new tires were made of coiled wires.

"We quickly learned that it doesn't scale up well," Creager said, because the break point—or point at which the metal would permanently deform—limited the "design space," he said.

"We couldn't do really high loads, a lot of deformation or certain shapes."

Chance meeting
While Creager said the team found structural ways to adjust the tires and push the limits, it wasn't the answer they were looking for.

Then one day, Creager ran into an old colleague, Santo Padula.

Padula was interested in seeing the team's lab and work.

"I showed it to him, and his eyes lit up," Creager said.

Padula, a NASA materials scientist, was working with shape-memory alloys.

"I looked at (the tires) and said, 'Aren't you having a problem with plastic deformation in this?' " Padula recalled in a nasa.gov video. "… He said, 'Yeah,' and I said, 'I have your solution.'"

Creager said, as mechanical engineers, they were looking at structural ways to increase the load, but changing the material wasn't something they had considered.

"This particular material doesn't deform like conventional material, where in those materials, when we put stress on them, we basically are stretching the bonds between the atomic structure," Padula said.

"This material has a unique characteristic that allows it to do an atomic rearrangement to accommodate deformation."

The nickel titanium alloy allowed the SMA Spring Tire to deform and return to shape 20-30 percent more than the previous version.

"We could actually deform this all the way down to the axle and have it return to shape," Creager said.

Heading to Mars
Interest in the moon program—and the tire—went quiet for a bit, but Creager said the team really pushed for the tire project to continue.

Soon, there was a new demand for tires for the Mars rovers.

"The missions were getting more aggressive with bigger, more complex rovers," Creager said. "We then saw the damage to the wheels on Curiosity. So that really brought the spring-style technology to the Martian side of things."

Images from Mars showed holes and other damage to the rigid wheels of the Curiosity Rover.

The tires will be used in a mission set to launch in 2026. The mission is in support of Perseverance Rover that landed on Mars in February.

Perseverance is collecting samples in canisters and leaving them at depot spots around Mars.

In a partnership with the European Space Agency, NASA is going to send a "smaller, quicker rover" to Mars that does not have all of the cameras and science equipment of Perseverance.

The rover's goal is to pick up the canisters and return them to a launch vehicle, which will land on Mars around the same time, Creager said.

Once launched into space, an orbiter will pick up the samples and return them to Earth around 2031.

"If all goes well, we will hopefully learn a whole lot more about Mars," Creager said. "If you can bring some of Mars back to Earth, and put it in these high-class laboratories, you can learn so much more about it."

Practical uses
Creager said there is interest in the technology for consumer goods, especially from the aspect of durability and sustainability.

The team at NASA recently created a spinoff version of the SMA Spring Tire for cars and trucks that it tested on a Jeep Wrangler.

"There's no reason you can't take the same design and encase them in rubber," Creager said. "Then you essentially have a tire on Earth that looks and feels like a traditional tire, but has no air.

"You'd never have to worry about getting a flat tire or driving underinflated."

Hutchinson on board Perseverance Mars Rover
5 for 50: 5 Polymers that are out of this world
Ford opens 'Disneyland for robots'
Toyota proposes rover design for future moon mission
Letter
to the
Editor