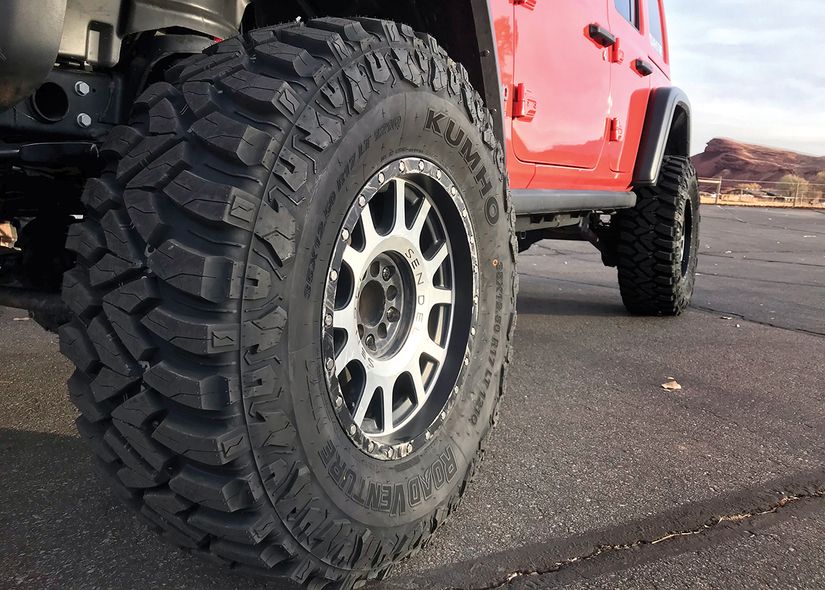 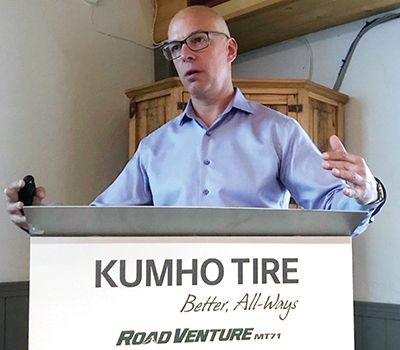 MOAB, Utah—Ascending a near vertical rock wall along the Hell's Revenge trail in Moab, where the ground in front of you disappears from the windshield and the driver's knuckles turn white, a line of Jeep Wrangler Rubicons crested the peak smoothly.

During a presentation at Sorrel River Ranch Resort near Moab, independent tester Ali Aljibouri, founder and principal dynamics engineer at Volk Wolf Dynamics, joked that the MT71—a "mud terrain" tire—performs well in the mud, too.

The RoadVenture MT71 represents an evolution for Kumho, and not just because it's the South Korean company's most aggressive tire.

The MT71 is one end of a new "simplified" tire lineup aimed at covering more of the market while easing consumer decisions and improving inventory needs of dealers.

Officials from Kumho Tire U.S.A., headquartered in Atlanta, said the RoadVenture MT71 would be released Jan. 1 with a unilateral pricing (UP) policy.

The RoadVenture MT71 took around two years to develop, Kumho said. For the company, the tire needed to meet certain expectations for traction, durability and handling, and that meant a lot of testing.

Aljibouri and Volk Wolf in San Antonio, Texas, worked with the Kumho America Technical Center in Akron to find the right balance between off-road traction and on-road stability.

"These are all opposing things, so being able to come up with a compound formulation that increases all of those is really kind of a breakthrough for an M/T product."

The tread has an aggressive look with a zig-zag, high-void tread pattern designed for maximum traction off-road.

Kumho's simplified product strategy in the U.S. will consolidate its tire line to five lines from 10, according to Shawn Denlein, Kumho USA's executive vice president of sales and marketing, who said the company was using two products to cover one segment.

"So what we've done now and moving forward from a product-strategy prospective … we are taking two products and putting them into one," Denlein said. "One, it doesn't complicate things for the consumer. And for (dealers), it steamlines your inventory, and you can focus on one product line."

The RoadVenture MT71 replaces the MT51 and KL71 tire lines.

The company already has used this strategy with the Crugen HP71, which last year replaced the KL33 and Ecsta STX for the CUV/SUV and sport SUV segment. On the ultra-high-performance segment, in August, Kumho replaced the UHP A/S and HP A/S with the Ecsta PA51.

The company plans to release the Solus TA51 for the grand-touring segment and the Ecsta PS72 summer high-performance tire, though company representatives did not indicate an exact release date.

The UP policy, launched in October for a handful of products, asks dealers to agree to using the price structure. It also gives the company a way to cease doing business with those that don't follow the policy.

"Any retailer who sells Kumho products on the internet must be an authorized reseller," Denlein said.

"Ultimately, we want the dealer to have better margins. We're trying to control our channel; and then also increase the brand equity."