Celebrating 60 years takes focus, innovation and vision, Yang said, reflecting on what has made Kenda successful over the years since his father founded the company.

"Across nearly every terrain in nearly every part of the world, Kenda has helped customers get where they need to go," Yang said.

"We focus on our founding core values of honesty, innovation, quality and customer service," he continued. "That is why Kenda has been trusted for 60 years."

And Kenda's adherence to these values, as well as its people, Yang said, is "what will continue to roll us forward for the next 60 years."

To mark its 60th anniversary, Kenda invited its customers and partners for a tour of the Northeast Ohio-based center April 27 to showcase the work that has helped build its reputation in the tire industry.

Rubber News photo by Sam Cottrill
CEO Jimmy Yang says Kenda’s core values of honesty, innovation, quality and service is why the company has been trusted for the past 60 years.

Along with the behind-the-scenes look at the research and patented technology that goes into its products, Kenda also debuted several new product lines, some of which have already earned several accolades, and the company's new eUniversity platform that reinforces its commitment to serving customers.

Yang didn't stop showing off there, as he took the time to recognize the people behind the brand.

"Our Kenda team members are key to our success, and their efforts have been noticed by the industry," Yang said, highlighting the tire maker's recent Best Practice Award from the Executive Council of Taiwan, as well as the D&I awards for the new Kenda Karma 2 Pro K1237 and the Gold Award for its TPSH Thickened Puncture Resistance Tube from the Taiwan Bicycle Association.

"These centers have developed the latest generation of Kenda products," Yang said, adding that the awards are the result of "true team effort" across the company.

Register for ITEC, the largest tire manufacturing show in North America with keynote speakers, industry movers and shakers, and plenty of networking.

Before the tour, Yang highlighted several new products that Kenda is launching, including two mountain bike tires, a second-generation mud-terrain tire, a non-pneumatic tire for zero-turn mowers, and a golf cart tire.

In the bicycle segment, Kenda is launching the Karma 2 and Rush tires.

"The Karma 2 is inspired by the abrasive nature of the original Karma," Yang said.

The tire comes with a completely redesigned tread pattern that still excels in muddy and loose terrain but offers faster rolling speed and improved sidewall casing technology, according to the product specs.

Coinciding with the new bike tires, Kenda also is sponsoring the expansion of Gators Bike Park in Columbus, Ohio, located about 30 miles from the Reynoldsburg, Ohio-based American Kenda Rubber headquarters.

Yang said this is part of Kenda's community outreach efforts, "partnering with organizations that bring mountain bike sports to the next generation of riders."

In the automotive sector, Kenda will launch the Klever M/T2 this summer, which was revealed at the 2021 SEMA Show in Las Vegas, Yang said.

The second-generation M/T tire will start with 30 sizes up to 37 inches and offers Kenda's "Triple Threat" 3-ply sidewalls as well as optimized tread for traction as well as chip and cut resistance.

Boasting Kenda's two championships, more than 20 wins and 40 podiums against other DOT tires, Yang said the M/T2 will be featured on the track this year at the Great American Short Course Series for off-road tires.

In the lawn and garden segment, Kenda is releasing a non-pneumatic tire for zero-turn mowers, in addition to a tire for wheelbarrows, wagons and carts. For the zero-turn mower, Yang said the new tire will be "especially beneficial in the commercial markets where time equals money."

And as the owner of more than 80 percent of the global golf cart market, Yang said Kenda is especially excited to announce the launch of a new tire for this market.

"Over the last 20 years, the golf cart has become more than just a golf course vehicle. It has evolved into a personal transportation vehicle," he said.

As this traditionally off-road vehicle is used on more paved surfaces, like in retirement communities, theme parks, airports and resorts, a need for a smoother ride has become "paramount," he said.

"Being a major OEM supplier to the golf cart industry, we stepped up to the challenge and are the first to design a steel belt, automobile-quality, radial golf cart tire," Yang said.

In addition to the new products, Yang noted "unprecedented growth" in Kenda's trailer steel wheel manufacturing facility in Elkhart, Ind., adding that the company is working with the Indiana Economic Development Corp. to fuel growth in the local economy and bring new jobs to the region.

Kenda also launched its eUniversity program, a "go-to place" for customers and partners to learn more about Kenda and what it has to offer.

"Our customers and brand ambassadors will have access to a series of short, fun and educational e-learning classes, giving them key information to make their jobs easier and helping them understand our company and products more clearly," Yang said.

The program launched May 4 and includes a "training library" of self-paced online classes on topics ranging from Kenda's history to detailed information about products and services.

Kenda opened the KATC in 2015 with the help of a JobsOhio grant, Yang said.

"That investment has turned out to be a very good investment, because in return, we've put out more than 20 times what we got from JobsOhio," he said, adding that this investment will "continue on."

Tom Williams, vice president of engineering at Kenda Tires, said Kenda so far has invested more than $20 million in Ohio since the opening of the technology center.

Over the last seven years, he said, Kenda has been "designing, revamping, setting up, getting equipment, hiring people, all that stuff," to make the 1978 building what it is today.

On top of building out what he described as a "shell" of a building when Kenda first acquired it in 2014, the company has been revamping its automotive, light truck, bicycle, UTV, ATV and motorcycle markets in North America.

The KATC employs nearly 50 engineers and technicians—with room for up to about 80—to ensure Kenda delivers a premium product.

But what goes into developing such a premium product exactly?

The short answer: a lot.

Rubber News photo by Sam Cottrill
Using a Faro Arm, Kenda can do full 3D scanning to characterize and measure its tires, as well as its competitors’ tires, for benchmarking.

The KATC has no shortage of machinery when it comes to developing Kenda's latest line of products.

Two of the facility's most recent additions include a high-speed uniformity machine, which tests rolling resistance, high- and low-speed uniformity, tire class body and more. Williams said the machine rolls tires at about 150 mph and "is used as a primary functional development machine for all of our new work."

Right across from this machine is what Williams called Kenda's endurance machine, which rolls a tire to over 200 mph at more than a 200-percent load—until it explodes.

By combining the data of both machines, Kenda can "understand what the performance limits are for the tire" to help meet customer requirements, Williams said.

And there's so much more, including an "environmental chamber," which ranges in temperatures from -140°F to 160°F for flat spotting, durability and endurance testing.

And Kenda's "measurements laboratory" is where tires can receive a 3D scan for benchmark testing and to "characterize anything we want to characterize about the tires," Williams said. This is right alongside a choreography machine that is used to find anomalies inside tires without needing to cut into them.

Here, Kenda characterizes its tires side-by-side with its competitors.

"It's very important for us as a company, not only to develop our own product, but to make sure our product is equal (to) or better than the competitors that are out there," Williams said.

"We have to understand the space we work in. The only way to do that is to make sure you understand and test the competitors as well." 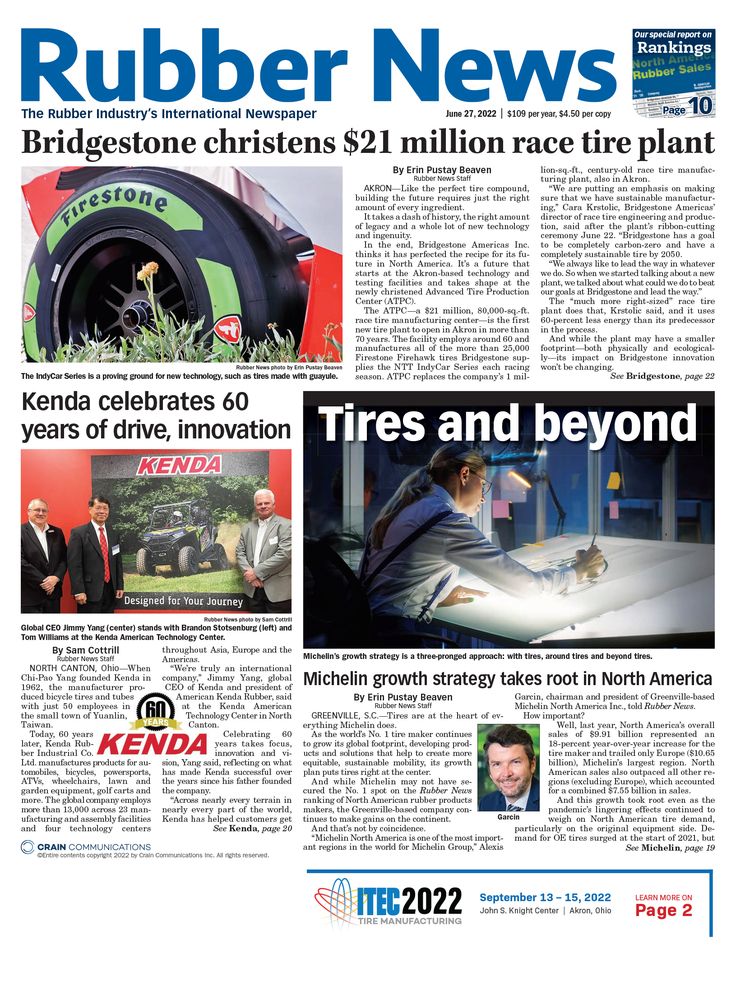 On the materials side of things, the KATC's compounding room is where Trevor Cody, a senior chemist at Kenda, surrounds himself with shelves of shredded tires, samples of natural and synthetic rubbers, carbon black, silica, you name it.

Cody said his job is to "take care of all the materials that go into the tires."

Here, he and his fellow chemists and compounders take on the primary responsibility of supporting the engineers all across Kenda with compound mixing and sample testing.

"We develop new compounds. We improve existing compounds," Cody said. "It's basically like a cake recipe."

"You've got all of the mechanical properties that are going into it, which will include all of the construction and the tread design itself," Stotsenburg said. "And then the compounds that are different throughout the tire all then go together to get that performance in that complete value at that cost level that we're targeting."

In other words, a tire that is "cheaper, but better" than its competitors, Yang added.

Stotsenburg said Kenda's tagline, "Design for your journey," is about "bringing to life all of the product segments for how people use them in the real world.

"And this center is a demonstration of what we do in the local market, in the Americas market," he said, "for how we bring design to your journey to life."