The annual Rubber News ranking of the Top 50 North American rubber product manufacturers is the product of several research tools.
The financial information is derived from a questionnaire sent to about 50 companies, via annual reports and a variety of financial documents, and from various industry sources. The firms must have a North American manufacturing presence to be eligible, and the rankings are based on rubber product sales on the continent.
Data for the rankings of the world’s Top 50 non-tire rubber product makers is compiled jointly by Rubber News and London-based European Rubber Journal.
Think your company should be included in the North American or global rankings? Contact Robin Clark at  [email protected] or Bruce Meyer at [email protected].

After a rocky 2020 where the coronavirus pandemic caused most businesses to screech to a halt at times, the revenue lines largely turned back in the right direction for much of the tire and rubber sector.

That was evidenced by that fact that all but three firms in this year's Rubber News ranking of the Top 50 Rubber Product Makers in North America posted higher sales in 2021 than they did the year before—many of those by large percentages as the industry looked to get business back to 2019 levels.

And two of the firms with lower sales in 2021 were Cooper Tire & Rubber Co., which was acquired by Goodyear in a deal that closed in early June of last year, and Eaton P.L.C., which closed on the sale of its hydraulics business to Denmark's Danfoss A.S. two months later.

Even with those deals, Cooper still ranked No. 16 on the year among the continent's producers of rubber goods, totaling an estimated $935 million in North America for the first five months of 2021. Likewise, Eaton came in at No. 28 for the year with an estimated $500 million in North American rubber goods' revenues, coming from seven months of revenue from the hose operations that were part of the hydraulics unit, along with sales from its top ranking Golf Pride rubber golf grip business.

Bridgestone Americas held onto the mantle as the top rubber product maker in North America, again edging out Michelin. Despite selling its Building Products unit in the first half of last year, Bridgestone saw its sales in the Americas rise by 25 percent during 2021, as it posted an estimated $11.5 billion in rubber product sales in North America, comfortably ahead of Michelin, which took in $9.92 billion on the continent.

On the global stage, Freudenberg Group remained No. 1 in Rubber News' annual ranking of the Top 50 Non-Tire Global Rubber Product Makers, based on 2021 sales. The German firm had an estimated $7.12 billion in rubber goods sales in 2021, while Continental A.G. maintained its No. 2 spot, with $6 billion in sales for a wide range of goods in its ContiTech business.

In North America, Goodyear again was third, but with seven months of sales from Cooper Tire, the Akron-based tire maker saw its North American revenue climb to an estimated $8.45 billion, compared with $5.38 billion in 2020.

The rest of the top five stayed the same, with Continental Tire North America No. 4 at an estimated $5.05 billion—including non-tire sales from ContiTech—and Parker-Hannifin Corp. stayed at No. 5 with $2.53 billion, derived from sales of hose and seals to a variety of industries.

This was the first year Rubber News ranked all of Freudenberg's rubber-related operations in North America, rather than just its Freudenberg Sealing Solutions operations. The combined activities of Freudenberg came in at No. 7 with an estimated $1.84 billion in rubber goods sales on the continent.

The only full newcomer to the North American Top 50 was Danfoss, which came it at No. 38, with five months of the former Eaton hose unit bringing in an estimated $270 million in revenues.

In the Global Non-Tire rankings, Hutchinson S.A. of France stayed No. 3 at $4.61 billion. And Parker-Hannifin moved up a spot to No. 4 at an estimated $4.02 billion. 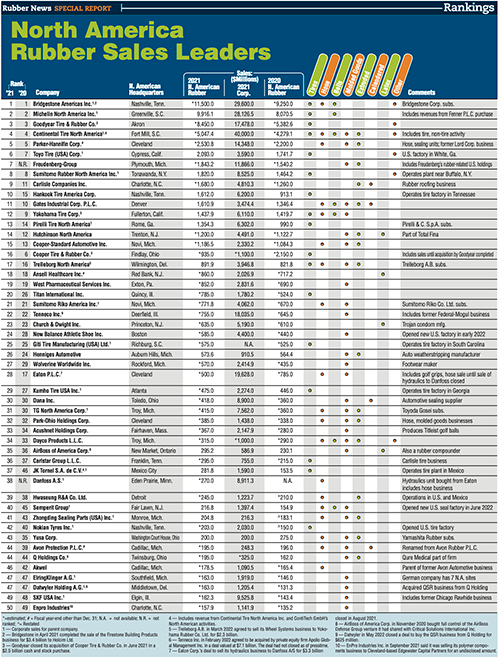 PPE causes spike for some

Globally, those firms supplying gloves for PPE usage saw sales surge during 2021. Malaysia's Top Glove Corp. Bhd. surged from No. 12 in last year's non-tire standings all the way to No. 5, with sales of $3.92 billion, more than double 2020 revenues of $1.7 billion. Those figures are for the firm's fiscal year that ended Aug. 31, 2021.

But it doesn't look like those numbers are carrying through to this current year as much of the restrictions related to the COVID-19 pandemic have been lifted or eased significantly. Top Glove, for example, saw revenues for the first three quarters of its current fiscal year drop 64 percent to $332 million, compared with $945 million last year.

Semperit, likewise, had delayed plans to sell off its Sempermed business when revenues grew during the height of the pandemic, but saw sales for the first quarter of 2022 thaw 14 percent to $238 million. The decline was due to Sempermed revenues dropping 45 percent on the quarter while all of Semperit's industrial sector businesses had strong growth.

Mergers and acquisitions certainly made their mark, impacting the rankings both in North America and around the globe.

The deal with the biggest impact on the North American rankings, of course, was Goodyear's $2.5 billion cash and stock purchase of Findlay, Ohio's Cooper Tire.

But that was by far not the only deal that changed the rankings, not just during 2021 but in the years to come.

The Danfoss purchase of Eaton's hydraulics division brought Danfoss its first foray into rubber products by bringing a leading industrial and hydraulic hose business with it. Danfoss officials have said its new Fluid Conveyance Division brings it a new business on a level that only can be gained through acquisition rather than by building from scratch.

Bridgestone selling its Building Products unit means that Holcrim Ltd. gains a rubber roofing business that will land it in the rankings in coming years.

Bridgestone also made a number of other divestments that will reshape its non-tire look in coming years. One of those deals, closed in 2021, sent its anti-vibration business to Anhui Zhongding Sealing Parts Co. Ltd., bringing the Chinese firm a unit that posted nearly $500 million in sales last year and has eight manufacturing sites and 3,850 employees.

Tenneco Inc., which touts both the Federal-Mogul and Clevite Elastomers businesses, is looking to go private with its pending sale to private equity firm Apollo Global Management Inc. in a deal with an enterprise value of $7.1 billion.

While not as large in terms of dollars, Swiss firm Datwyler Holding A.G. closed on a $625 million acquisition in May that brings it Q Holding's QSR business. Daywyler this past March also completed a deal to purchase Chinese health care elastomer components manufacturer Yantai Xinhui Packing.

And one other pending deal also will reshape two firms in the coming years: Yokohama's bid to acquire Trelleborg A.B.'s Wheel Systems business for $2.3 billion.