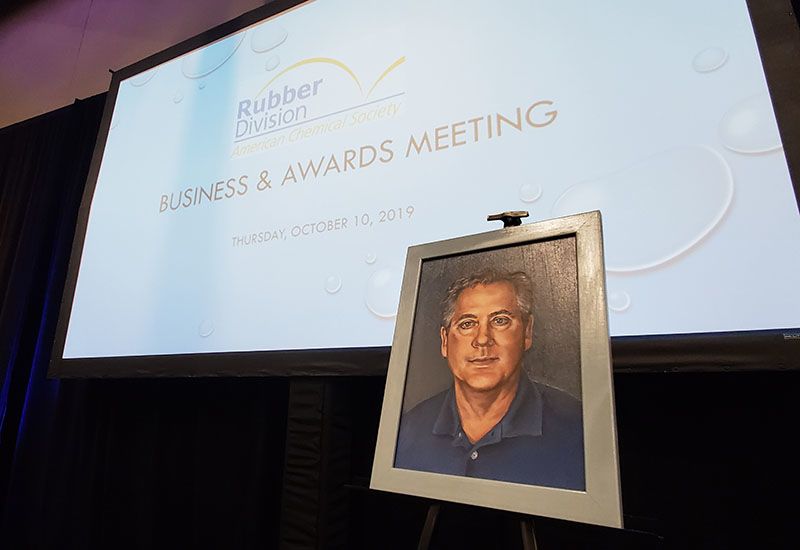 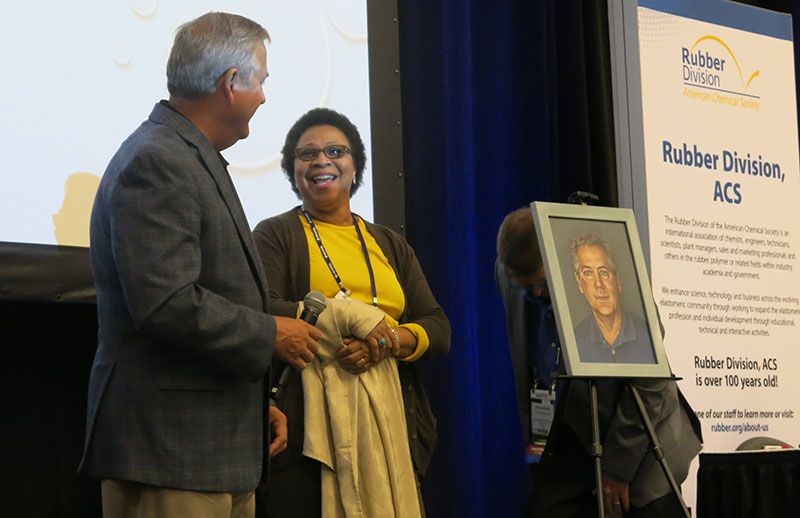 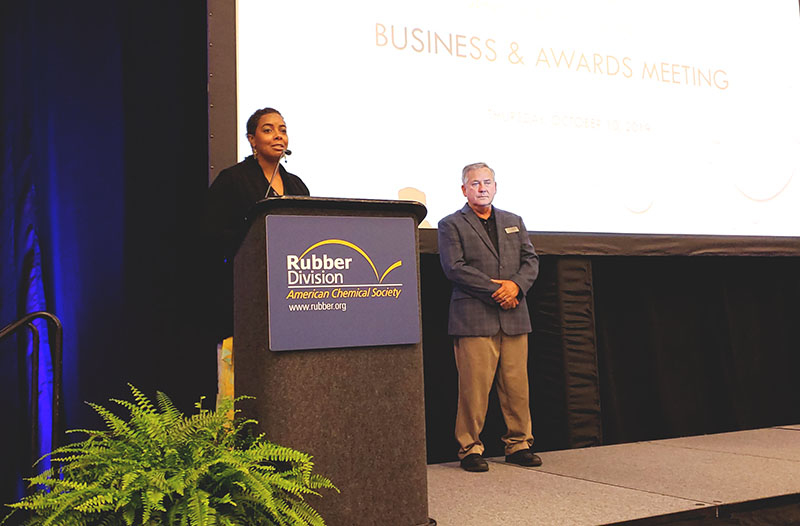 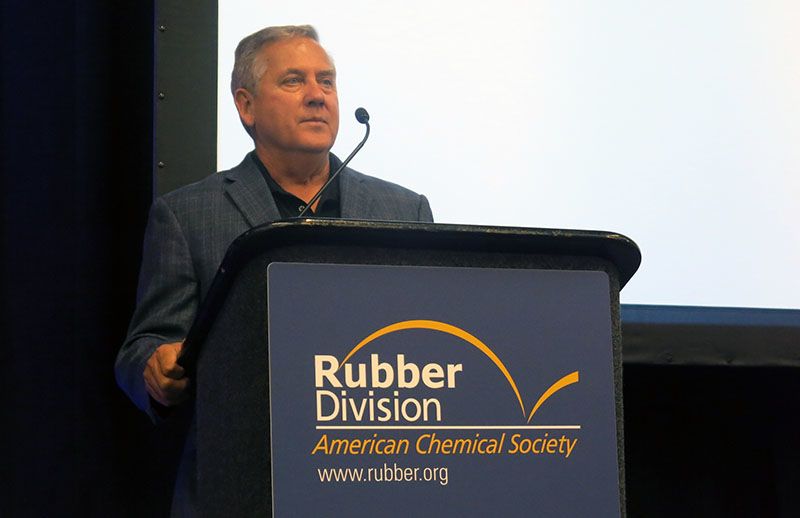 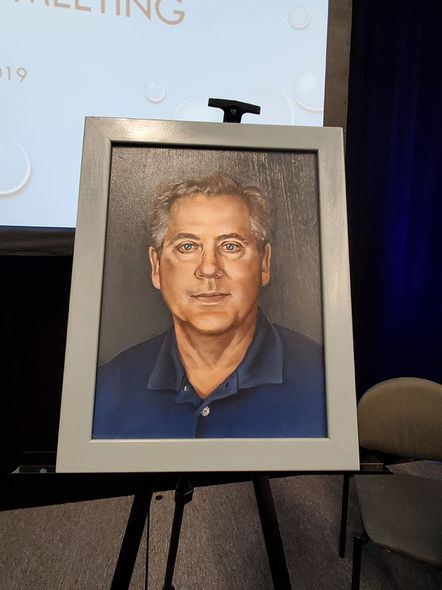 Erin Pustay Beaven, Rubber & Plastics News
A look at the portrait of Ed Miller that will be hung in the Rubber Division offices.
Share 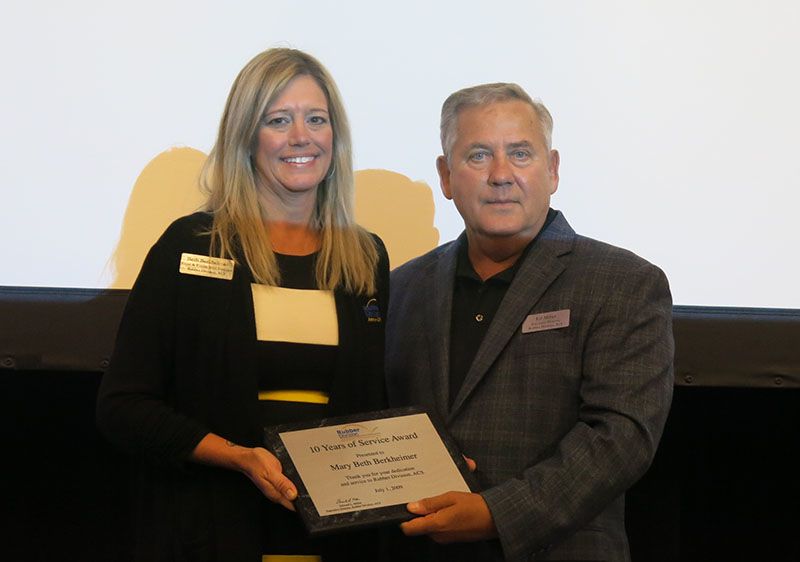 Erin Pustay Beaven, Rubber & Plastics News
Beth Berkheimer, exposition and furture sites director for the Rubber Division, is recognized by Ed Miller for her 10 years of service to the organization.
Share 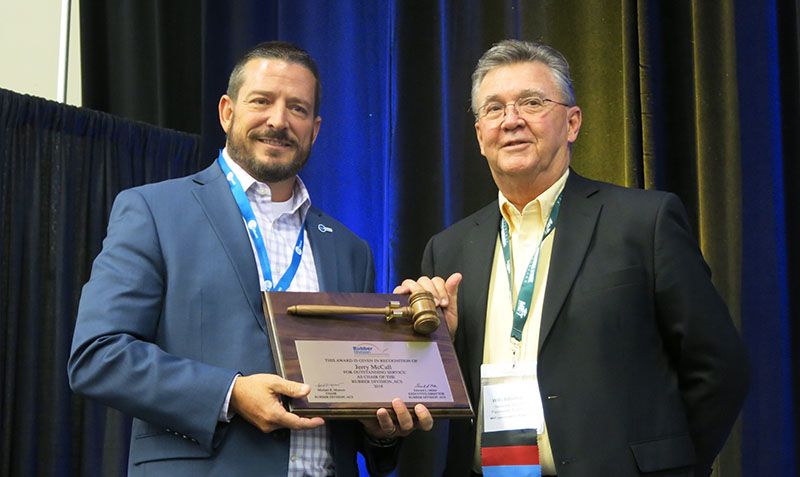 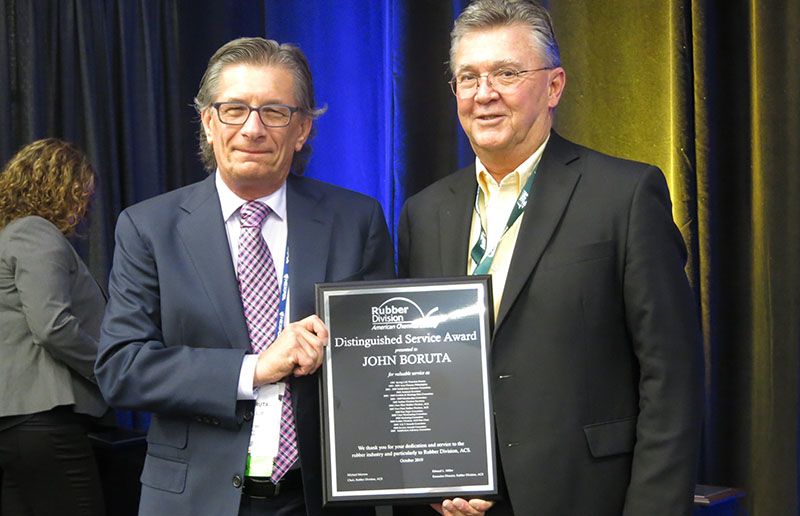 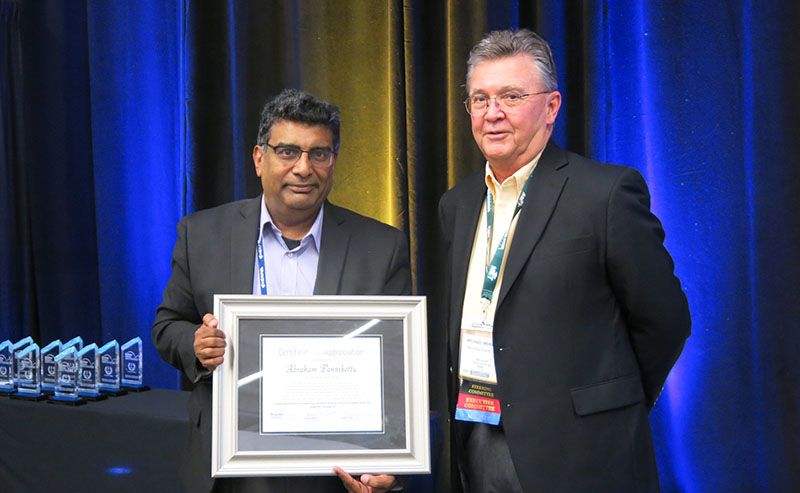 Rubber Division Chair Michael Morrow (right) presents Abraham Pannikottu with a certificate of appreciation for his service to the Rubber Division. 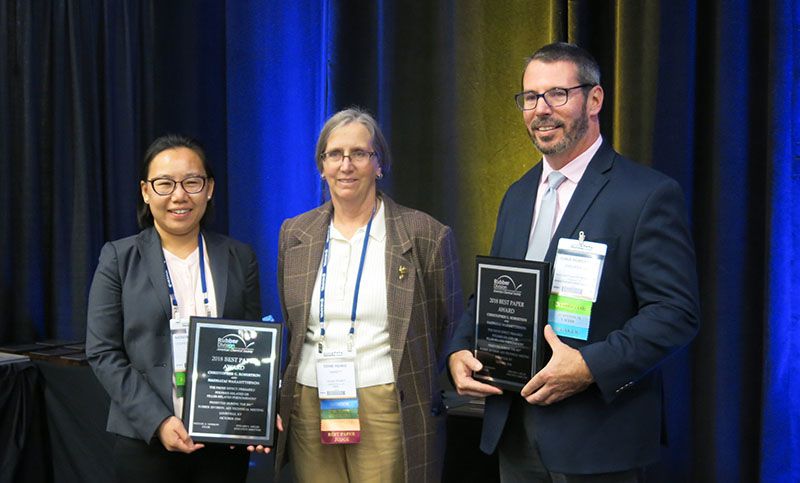 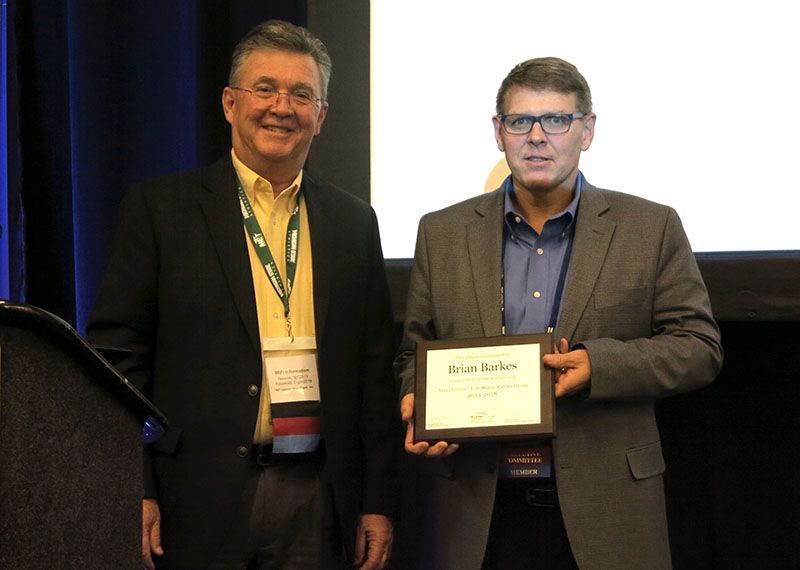 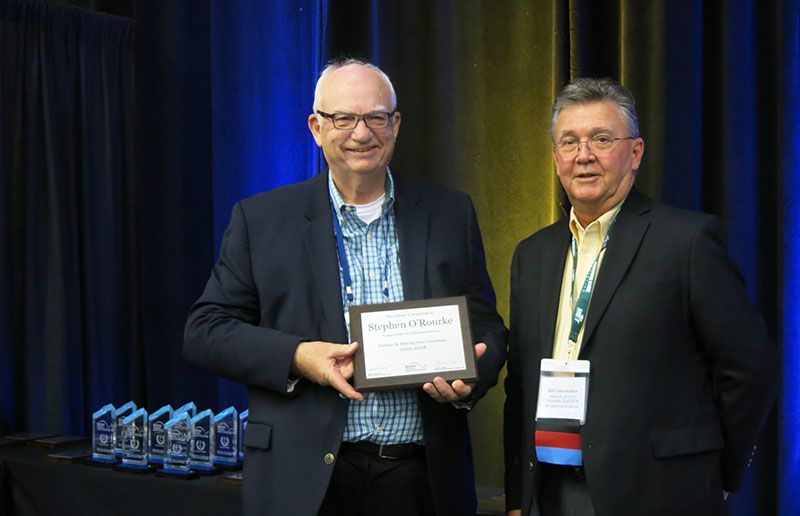 Rubber Division Chair Michael Morrow (right) presents Stephen O'Rourke with a service award for his service with the Exhibits and Meeting Sites Committee. 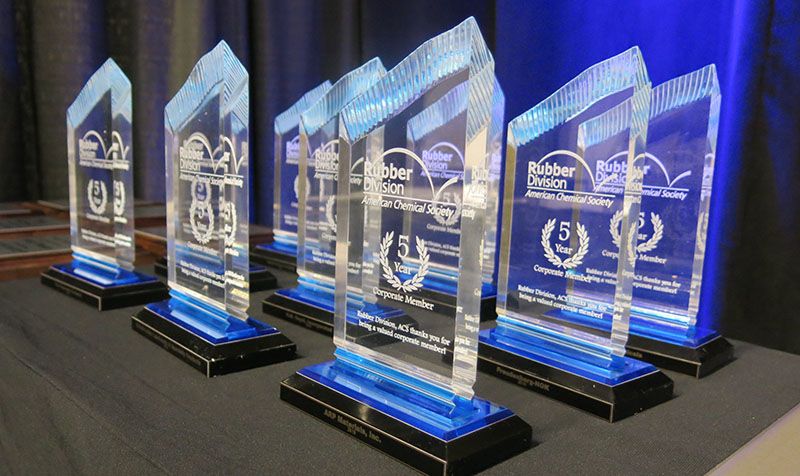 The awards recognizing corporate partners for five years of support wait to be presented. 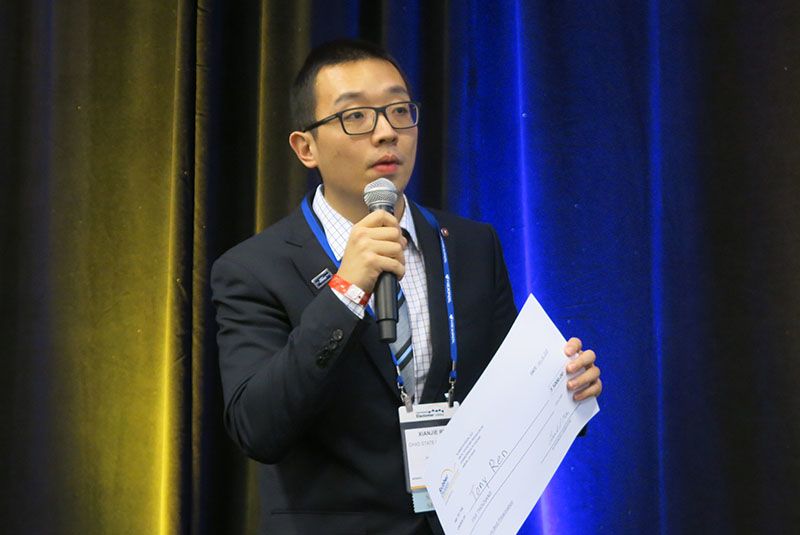 Xianjie Ren takes a moment to discuss how his involvement in the Rubber Division's events have impacted his education. He was given the best presentation award for his paper in the student colloquium. 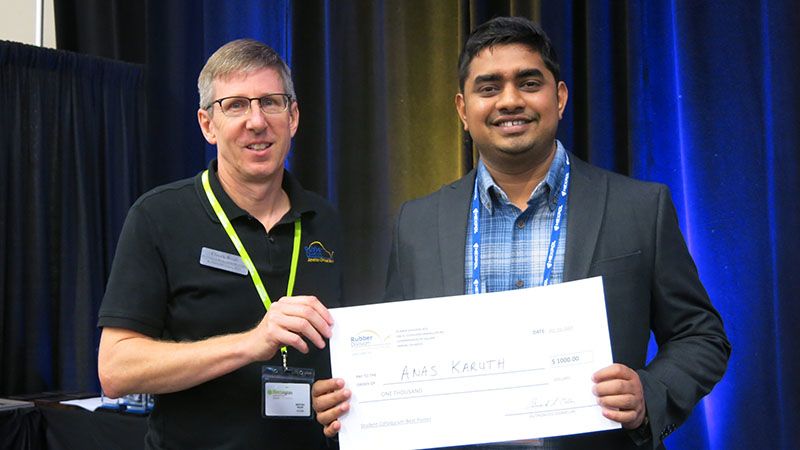 Chuck Brady (left) presents Anas Karuth with an award for his poster presentation during the student colloquium. 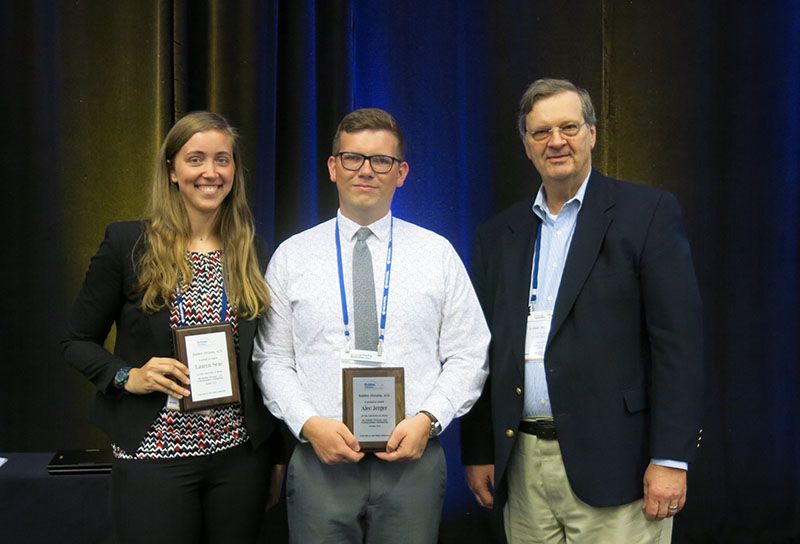 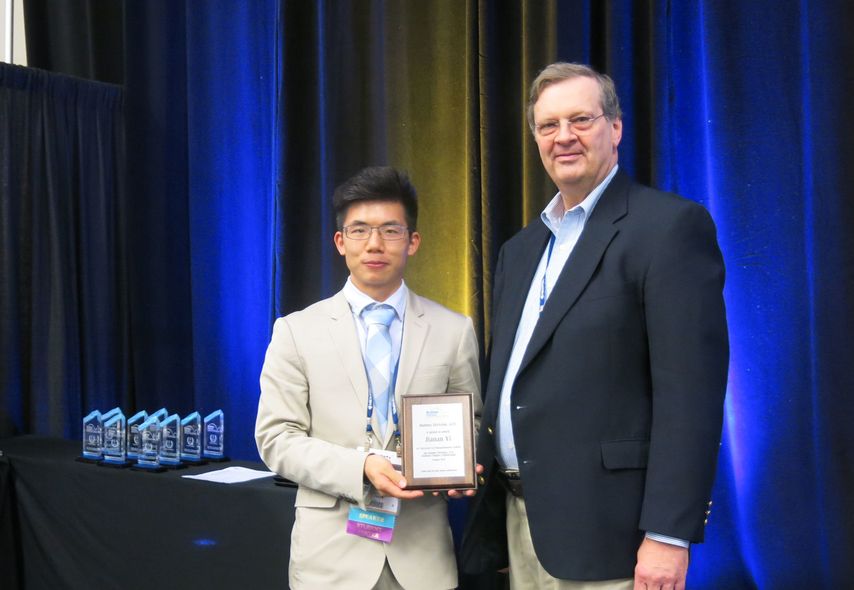 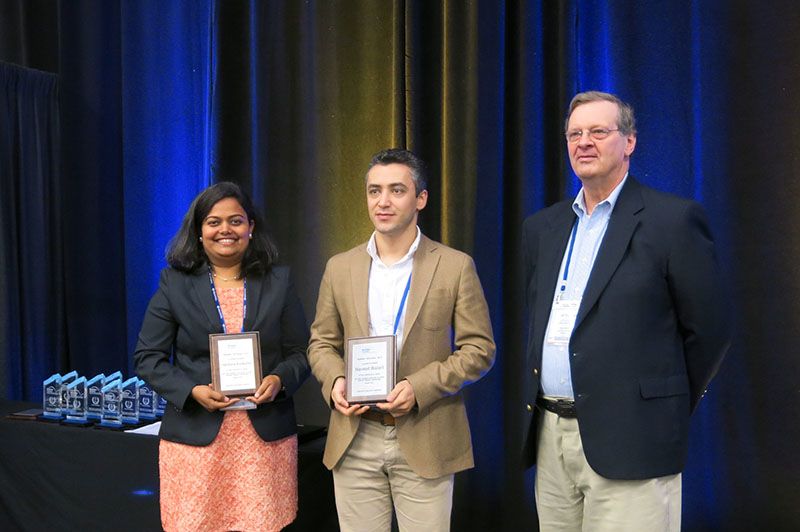 CLEVELAND—The Business and Awards Meeting, held at the end of the 2019 International Elastomer Conference, felt a little bit different this year. Symbolically, it marked the changing of the guard.

After presenting all of the awards recognizing volunteers, professionals and students for their service and research, the Rubber Division Steering Committee paused to say one last thank you Ed Miller, who has served 19 years at the helm of the organization, the only executive director the association has ever had.

Kim Dempsey-Miller unveiled a portrait of Miller that will be hung in the Rubber Division offices. He took time to thank the group for allowing him the chance to serve, but also made a point to share one last piece of advice with Lakisha Miller-Barclay, who has been named as the association's executive director and will take the reins early next year.

"This piece of advice, Lakisha, puts it all together," Miller said. "It far outshines any other thing I can tell you. In all honesty, if you want to be a hugely successful executive director, lead from your heart and not just your mind and I guarantee you will be a great executive director."

Miller-Barclay admitted that she loves hearing Miller's advice. But the power of his advice, she noted, lies not just in the wisdom he imparts, but in the quiet leadership he has shown throughout his nearly two decades of service.

"I have always admired, always watched Ed, always listened and tried to pick up the good and the bad and incorporate it into everything I do," Miller-Barclay said. "I am forever grateful to you. You have taught me so much, and I am honored to be selected as the second executive director of this 110-year-old organization/association in this industry."