DES PLAINES, Ill.—Rahco Rubber Inc. started with less than five employees and seven presses in 5,000 square feet of space—an offshoot of what used to be the world's largest producer of phonograph needles.

Now the ISO 2015 certified manufacturer of molded rubber parts, components and seals is celebrating its 50th year in business alongside almost 100 team members in its current 65,000-sq.-ft. facility.

Headquartered in Des Plaines, the family-operated manufacturer now houses more than 60 injection, compression, transfer and vacuum presses as well as offices, laboratories, shipping and receiving all under one roof.

And at 50 years old, some upgrades have been in order.

Dennis Askew, business development manager at Rahco, said the company has experienced several facelifts within the last year, "some sexy, some not," including the replacement of the facility's roof for about $250,000, and a switch to LED lighting on the factory floor.

More exciting upgrades, however, include an investment in new equipment intended to save the company time and resources—on top of meeting customer needs.

And having been in business for as long as it has, Rahco has developed long-lasting partnerships, Askew said.

From a customer standpoint, this translates to specialty, dedicated equipment. And everything the company makes for its clients is custom, right down to the formulations of each product.

"We don't have an off-the-shelf O-ring that we sell," Askew said. "Everything we make is custom, every formulation is custom."

Rahco makes its rubber in-house "where it makes sense," but it also sources it from other ISO-certified suppliers, "so it's quality in, quality out," he said.

Within the facility is a milling department where the rubber compounding takes place. From there, the rubber goes to a lab to confirm "it's what it's supposed to be," then it goes to the factory floor for molding, said Sean Cunningham, engineering manager at Rahco.

Through this process, Rahco ensures its customers are getting the right mix for their products before the materials ever hit the factory floor.

Rubber News photo by Sam Cottrill
Rahco Rubber has more than 60 presses at its 65,000-sq.-ft. facility, ranging in age from less than a year to more than 20 years.

Askew noted that one of the things that makes Rahco unique in this sector is its ability to mix in color.

"Usually with rubber, it's any kind of black you want," he said. "Here, you'll see greens, reds, blue—we even mix white here in-house."

In the injection molding department, Askew pointed out two new presses purchased specifically for a single customer who was looking to outsource moldings to optimize floor space.

"They came to us," said Askew, who could not disclose the name of the customer. "We invested in the two presses, and now we're doing all their molding."

"We do that as an extension of their company and mold specifically for them," Askew said.

Cunningham said just in the injection molding department, the company has presses that range in age from less than a year to more than 20 years old—all kept in shape with both in-house and contracted preventative maintenance.

"We don't really fall into either one of those categories, it's kind of a combination of both," he said.

And with some of these custom products produced by the millions at Rahco, the company needs the right equipment, and enough of it, to meet customer demands.

"A lot of the new equipment that we're investing in is going to automate what we've been doing manually," said Steve Anton, president of Rahco Rubber.

He said the company brought in new equipment last year that allowed Rahco to repurpose two to three employees into other areas of the factory.

What used to require 100-percent involvement all day, he said, is now done with a single attendant.

Rahco also brought in a new press and mold, a Desma Sealmaster, the company's first horizontal press which produces 3 million rubber parts per year. And as of August, Rahco had another one on order.

Cunningham said with the addition of the two horizontal presses, Rahco is going from requiring eight to 10 operators to requiring only two attendants, allowing the company to relocate its operators to other jobs on the floor.

The new press not only adds more automation to the factory floor, it helps the company reduce its carbon footprint via waste mitigation.

Askew said with the new equipment, the company has reduced its waste per part from about 600 grams to less than 6 grams.

"We don't have a clean waste stream like tires," he said. "Whatever we produce, whatever scrap is there, is landfill.

"What we can offer is the flash-free molding opportunities in mitigating that waste, so it never becomes landfill," he added.

Between the two presses and the automation, Askew said the company is looking at about a $2 million investment.

While this is a "ginormous number" for a company like Rahco Rubber, Askew said it shows the company's commitment to its customers.

Where it was, where it's going
Rahco Rubber photo
Rahco Rubber started in just 5,000 square feet with less than five employees in 1972. Now, the company employs nearly 100 team members with more than 60 presses at its 65,000-sq.-ft. facility in Des Plaines, Ill.

Anton said the company is an outgrowth of Fidelitone Inc., a company from which his father, Bill Anton, retired.

Anton's father, along with two partners, incorporated Rahco in 1972 as a molder of miniature, high-precision rubber components for phonograph needles and cartridge assemblies.

Fidelitone, now a supply chain management company, was established in 1929 and originally was the world's largest producer of phonograph needles.

Fidelitone would source dampeners for the phonograph needles and cartridges from another company, until "they couldn't get the service and response they needed," Anton said.

"(Fidelitone) decided to set up their own little rubber activity," he said, "and they hired a rubber chemist and engineer, and (soon) they were making their own parts internally."

The company decided to seek its own customers for the rubber parts, selling to companies like Magnavox, RCA and Zenith.

"They had the nucleus of a little rubber company going," he said.

But the more parts Fidelitone sold, the more money it lost. "So, the president of the company told my dad to get rid of it."

Anton said when his dad offered to buy the rubber segment to start up a new company, the president of the company joined him. 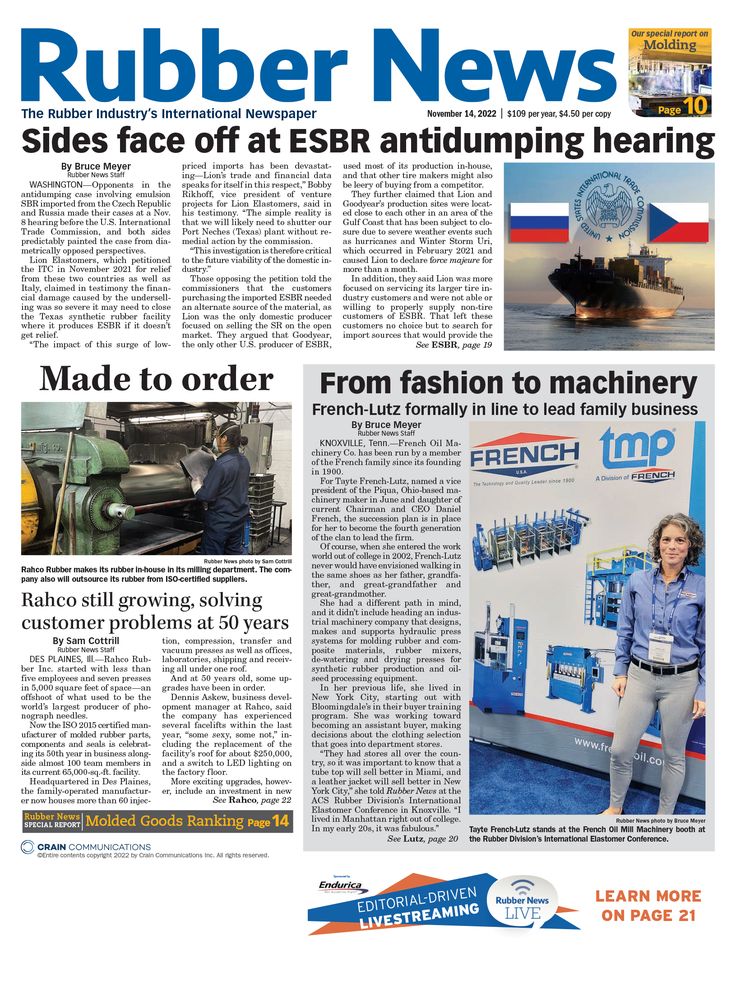 Steve Anton quit his job in computers and joined the company in 1976 at the age of 24, about a year after he graduated from college.

"There were three or four people, and we were in a little place," Anton said, noting the 5,000-sq.-ft. facility was part of the original factory that made the phonograph needles, which had "long since moved away" to Scotland.

The company outgrew this original facility and in 1984 moved into a 20,000-sq.-ft. facility in Chicago, where it employed 35 people with 35 presses.

"Then we moved here in '95," he said of the current Des Plaines facility. "And we've been here ever since."

With a "good atmosphere" and established niche in the rubber industry, "which is everything but automotive and medical," Anton said the company is growing.

Anton, who now runs the company alongside his brothers Jim and Jack, said the company has been fortunate in recruiting labor for the floor and is "doing incrementally better."

And when it comes to growing the team, Rahco doesn't shy away from youth outreach.

The company has placed a focus on career days at local high schools and educating students on the opportunities available in manufacturing and the rubber industry, Askew said.

"We've got a terrific team, we really do," said Anton. "We've never had a better group of people here by far. And we're trying to add to it."

From a materials standpoint, Anton said, Rahco has been doing better in securing the supplies it needs since the start of the pandemic.

But as every formulation is custom to each of the company's customers, one missing ingredient could result in a chain reaction of delays.

And finding a replacement, of course, is followed by several processing and approval steps with the company's customers. "There isn't as much pressure on as before, but all it takes is that one ingredient in that recipe to throw a curveball," Askew said.

But the company has been responsive to such challenges, he added, noting that as a smaller company, Rahco can pivot without the "bureaucracy of a bazillion-dollar company."

"You see, the Trelleborgs of the world, they're like the ocean freight liner. We're like the cigarette boat next to it, being able to speed up and slow down and turn on a dime," he said.

"People buy what they want, not what they have to. And we give them that opportunity."

Rahco Rubber photo
Dennis Askew says one of the things that makes Rahco Rubber unique is its ability to mix in color.

Jim Anton, vice president of operations, who has been with the company since 1979, said he keeps his finger on the pulse of the industry when it comes to the supply chain and makes sure he communicates with suppliers and customers.

"One of the challenges is that all our customers have different needs and run their businesses in different ways," he said. "So you kind of have to customize your approach to them."

Jim said the company's size allows Rahco to accommodate its customers' needs (within reason)and be more flexible to their ways of business.

"If a customer … has a sense that it's got to be business the way we want to do business, as opposed to what is important for them, … we're in trouble," Steve Anton said.

Askew said Jim brings "historical trial knowledge" to the table, allowing him to guide customers as their "voice of reason."

"Some of our longest customers have been here since day one," Askew said. "We have 50-year relationships with our customers."

He said Jim can discuss these changes and provide meaningful feedback with these customers based on their history with the company.

Being close to the company's customers and suppliers, Jim also is one of the first in the company to catch on to industry trends. And right now, he said, inventories are tightening up.

"A lot of people now are stopping and taking a look at their inventories and starting to realign and realize that things are changing and maybe changing quickly," he said, noting that demand is beginning to level off due to fears of a recession.

But Steve Anton said Rahco always is focused on finding new business to protect itself and its partners from market changes.

"Our sale cycle is forever in a day," he said. "But you could lose it in half an hour."

Askew added that the firm is "trying to add value and problem solve and support our customers' needs."

"We work as an extension of their staff," he said. "If they don't have a rubber expert on their team, we become that team member, and partner with them to become a value-added solution."