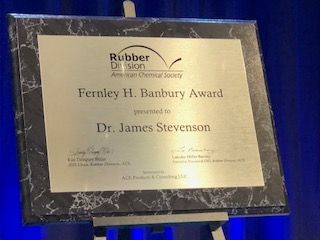 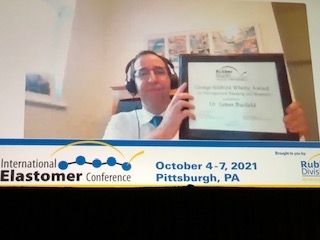 James Busfield accepts the George Stafford Whitby Award for Distinguished Teaching and Research remotely from his home in England.
Share 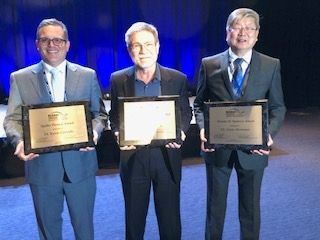 Kevin Cavicchi, Howard Colvin and Solomon Tang (on behalf of the late James Stevenson) pose with their honors following the Oct. 6 Science and Technology Awards.
Share 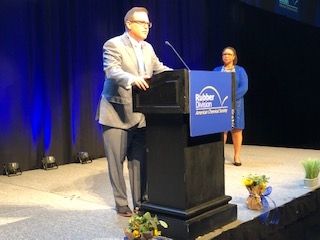 Kevin Cavicchi offers his thanks to the audience in the Spirit of Pittsburgh Ballroom at the Dvid L. Lawrence Convention Center Oct. 6. Cavicchi received the 2021 Sparks-Thomas Award.
Share 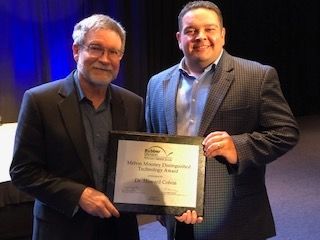 Howard Colvin, left, was named the 2021 recipient of the Melvin Mooney Distinguished Technology Award. He stands with Russ Vogelsong of Lion Elastomers, which sponsored the award.
Share 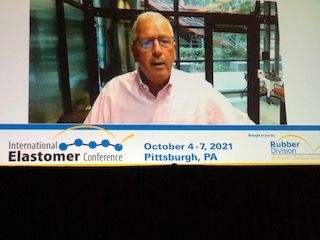 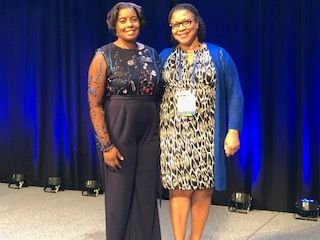 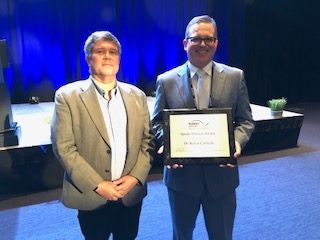 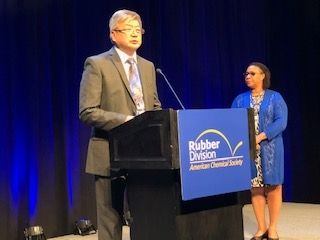 Solomon Tang of Lion Elastomers accepts the Fernley H. Banbury Award on behalf of his friend and colleague, the late James Stevenson.
Share 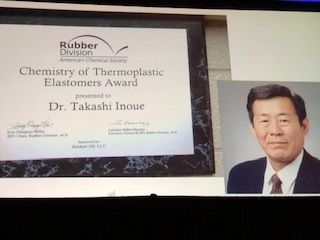 PITTSBURGH—The top professors, scientists and chemists—essentially the movers and shakers of the technical side of the rubber industry—were honored Oct. 6 at the 200th ACS Rubber Division technical meeting, as the prestigious Science and Technology Awards were handed out at the David L. Lawrence Convention Center.

"Congratulations to all of our winners for 2021, as all have made valuable contributions to our industry," said Kim Dempsey-Miller, chair of the ACS Rubber Division, who issued the awards.

Not all were present to receive the awards, as many appeared virtually to accept their honors. Their awards were announced during the 2020 Virtual IEC, and normally would have been handed out at the spring meeting earlier this year. But the 2020 winners did not receive their awards last year because of the pandemic, and they were given their honors at the 2021 Spring Technical Meeting.

DeSimone, co-founder and chairman of Carbon Inc., has numerous pioneering breakthroughs to his credit in green chemistry, medical devices, nanomedicine and 3D printing.

He has more than 200 patents to his name.

"With his sustained impact, unbridled passion and ability to integrate fundamental rubber science and engineering with rapidly emerging technologies, DeSimone has positioned the rubber industry for continued success for decades to come," the Rubber Division said in its biography of DeSimone.

The Charles Goodyear Medal is the

Stevenson passed away in December 2020. The award was accepted by Solomon Tang of Lion Elastomers.

Stevenson established himself as a premier authority in rubber extrusion, according to Tang.

He has conducted research at Cornell University, where he joined the chemical engineering department in 1971 in biomedical and polymer flow research, and he has supervised the development of control systems allowing independent manipulation of "multiple extrudate dimensions by use of screw speeds, temperatures, adjustable dies and roller heads."

He authored 67 papers and holds 28 patents.

The director of the University of Washington's Engineered Biomaterials Engineering Research Center, Buddy Ratner is the 2021 winner of the Bioelastomer Award.

Ratner has worked for most of his professional career in biomaterials and biomedical engineering, and his work on synthesis and surface characterization of elastomeric polyurethanes is world-renowned, according to Dempsey-Miller.

"Dr. Ratner is one of the elite scientists elected to the National Academy of Engineering of the U.S.," states the ACS Rubber Division in its honoring of Ratner.

Inoue has served as a research scientist in Japan and the U.S. and was the Harold Morton Distinguished Visiting Professor at the University of Akron in 1997.

He has served as president of the Society of Rubber Industry, Japan, and the principles he espoused have been used to improve the quality of TPEs and the development of non-vulcanized TPEs.

Cavicchi's work has focused on the structures and properties of small molecule organogels, ionomers, block copolymers and their blends.

The winner of this year's George Stafford Whitby Award for Distinguished Teaching and Research went to James Busfield, head of the soft matter research group at Queen Mary University of London.

The award is sponsored by Cabot Corp.

Busfield's teaching accomplishments are esteemed, as he has supervised more than 33 doctoral students and even more master's level students.

His students have gone on to work for Bridgestone, Solvay, Continental, Birla Carbon and others.

At QMUL, Busfield has encouraged his students to investigate and solve materials science problems featuring rubber materials, and his Soft Matter Group has conducted groundbreaking work in strength and fatigue life of elastomers.

Busfield was the Starks-Thomas Award winner from the ACS Rubber Division in 2010.

Colvin's work as an organic chemist in the Hydroquinone and Derivatives Group with Goodyear led to new polymers developed for tire applications, latex and solution elastomers for asphalt modifications and hydrocarbon resins.

Colvin also worked at Solvay Engineered Polymers, where he engineered new TPOs for the automotive industry, and for Cooper Tire & Rubber Co., where he led that company's efforts in guayule rubber, which led to successful road tests of the all-guayule concept tire.

Howard retired in 2017 and now serves as an industry consultant.