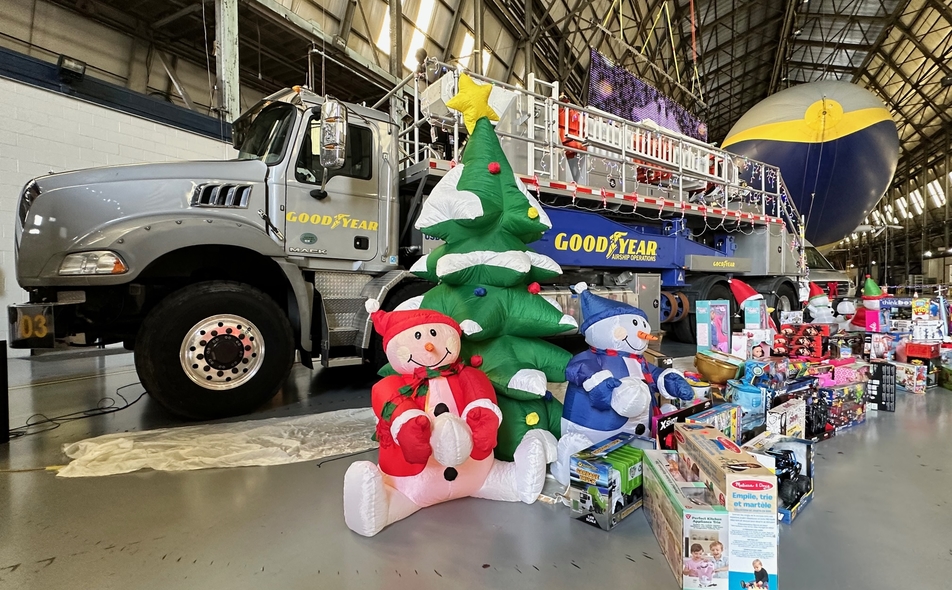 Goodyear associates volunteered more than 400 combined hours to the Toys for Tots campaign for 2022, which was the second-largest collection in the company's 12-year history of participating in the U.S.M.C. outreach event.
Share 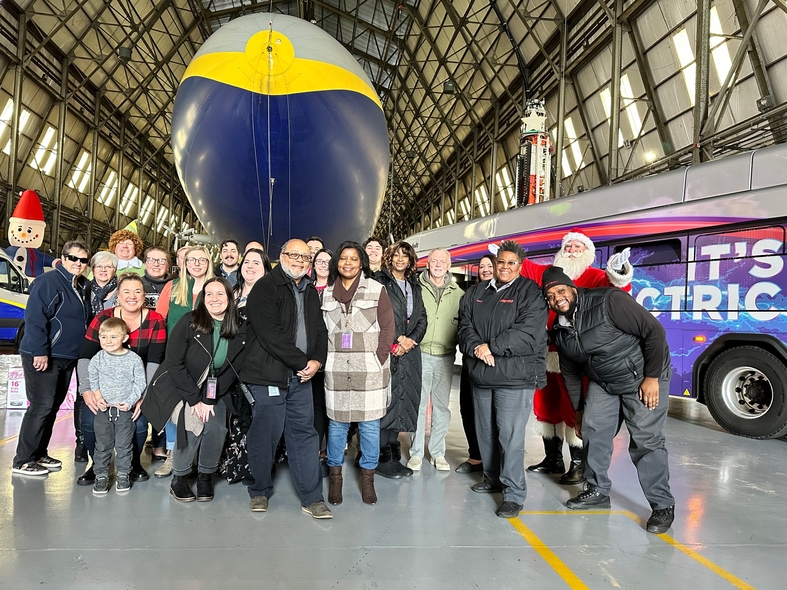 Associates from Metro RTA deboard the electric bus Dec. 2 for a photo with Wingfoot One and Santa Claus. Metro RTA dropped off about 40 toys for the Toys for Tots campaign.
Share 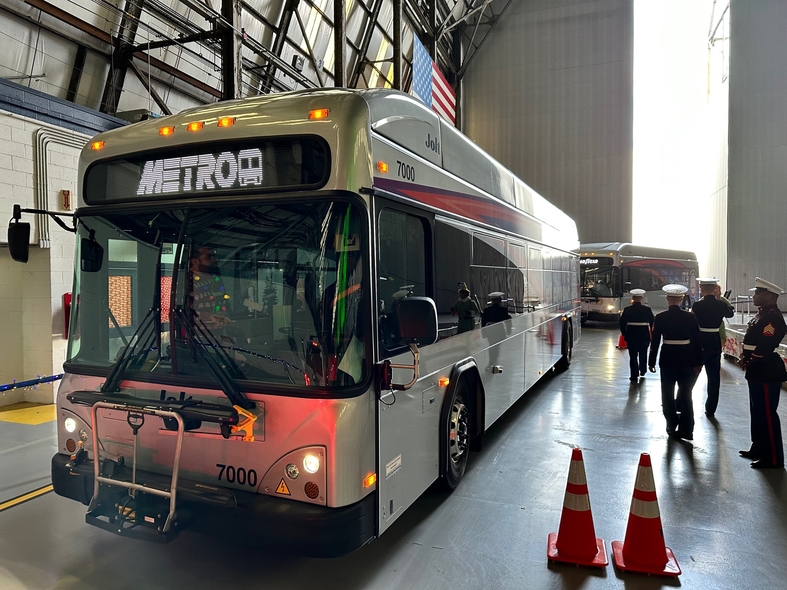 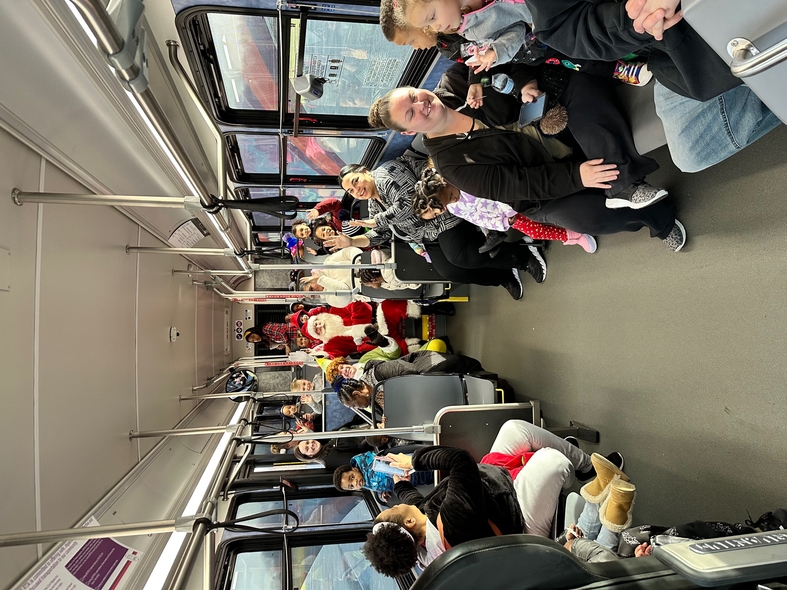 Santa sits aboard the Metro RTA bus with children and teachers from the Kozmic Korner in Akron.
Share 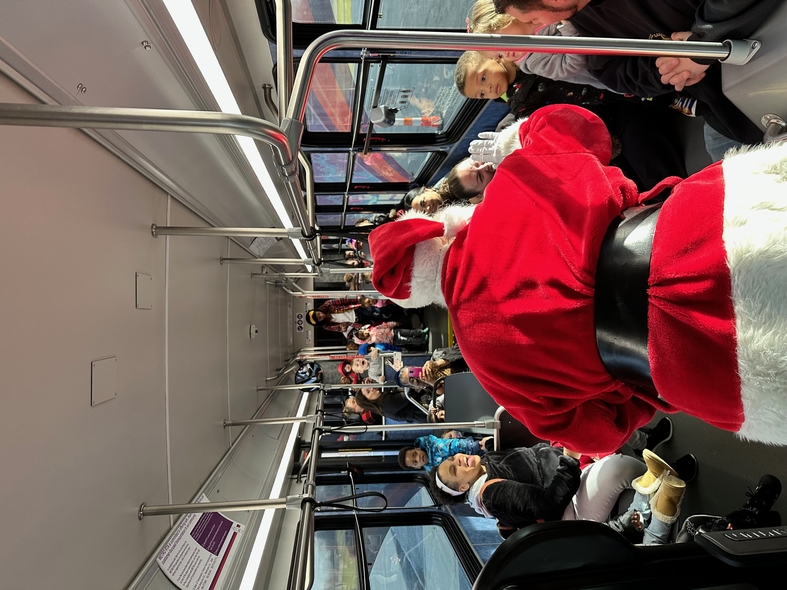 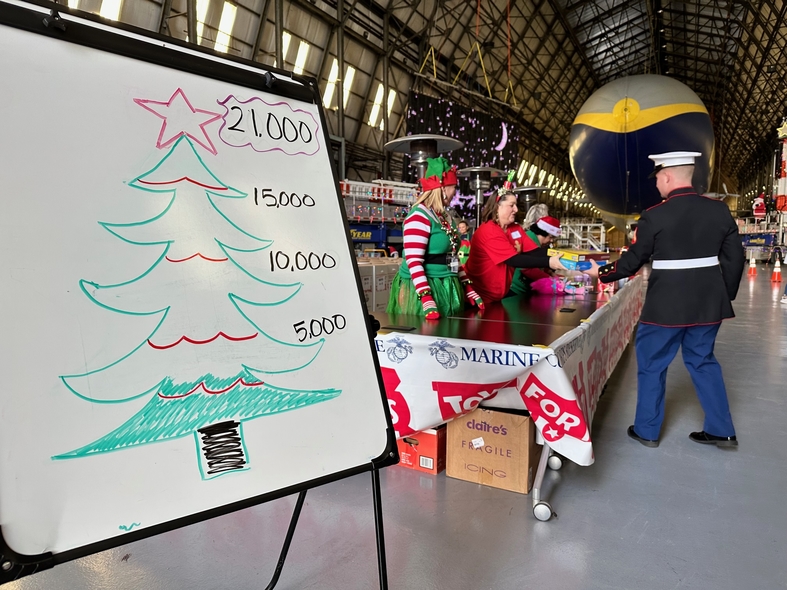 A U.S. Marine hands a toy to a Goodyear volunteer Dec. 2 for proper categorization.
Share 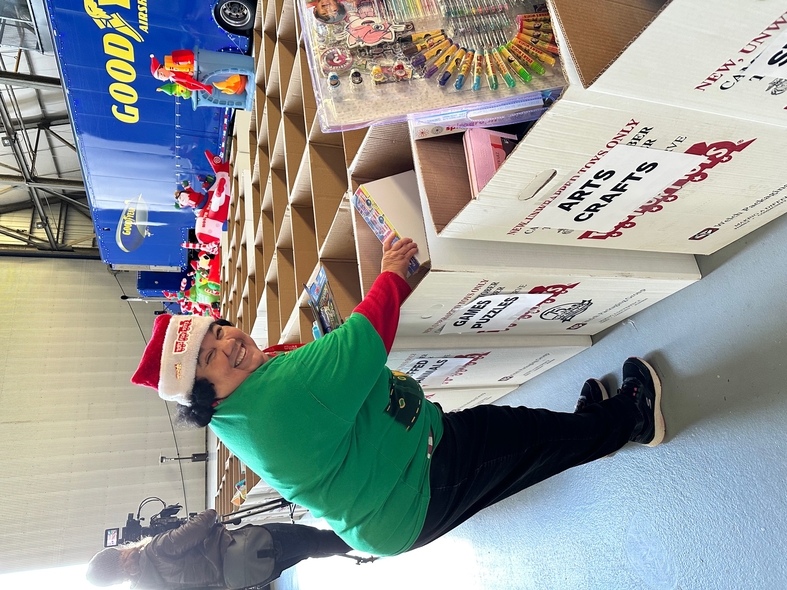 A Goodyear volunteer places a toy into its proper box Dec. 2 at the blimp base in Mogadore, Ohio.
Share 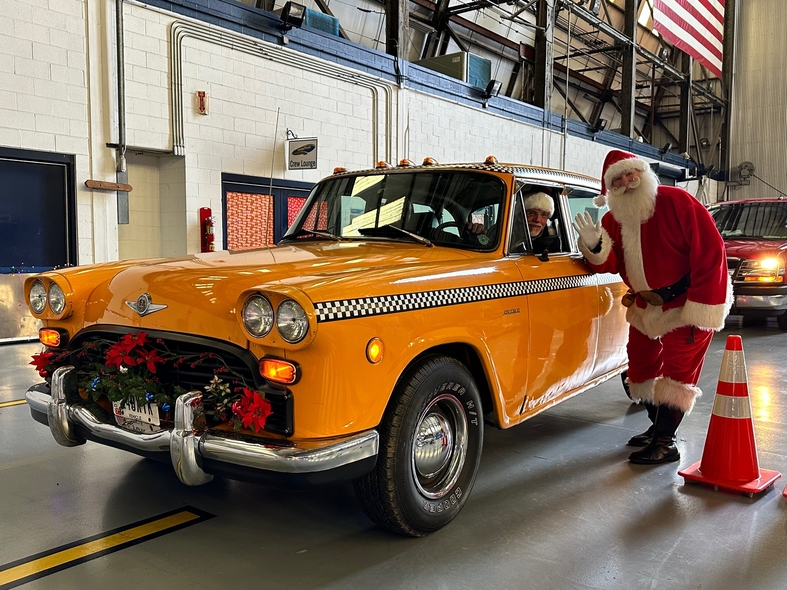 Santa poses with the driver of an old taxi cab as it makes its way through the 800-foot blimp hangar.
Share 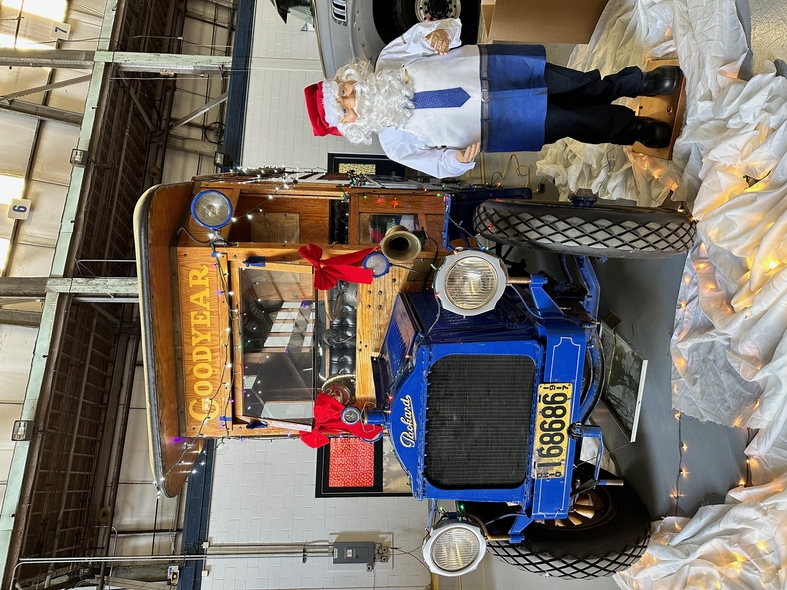 Toy collections run through Dec. 10 at the Goodyear blimp bases in Florida and California.
Share 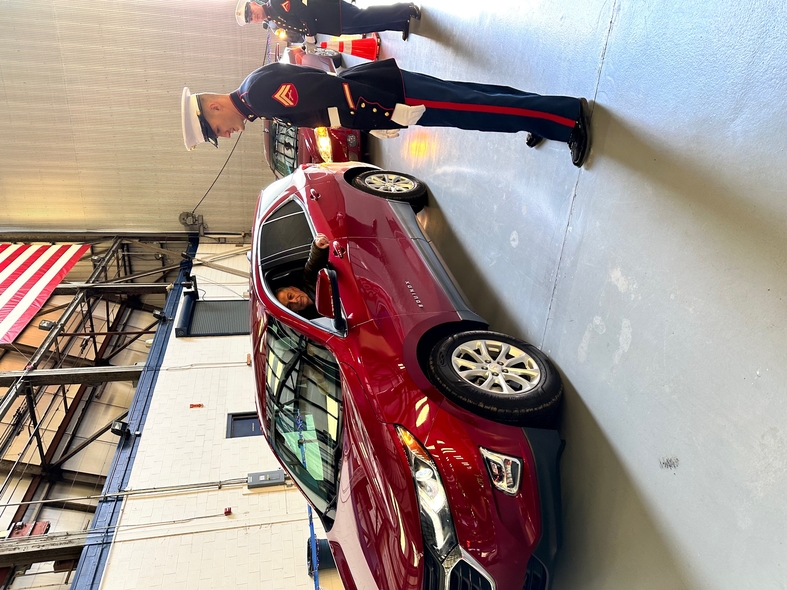 A U.S. Marine stands at the front lines of the Toys for Tots campaign 2022.
Share 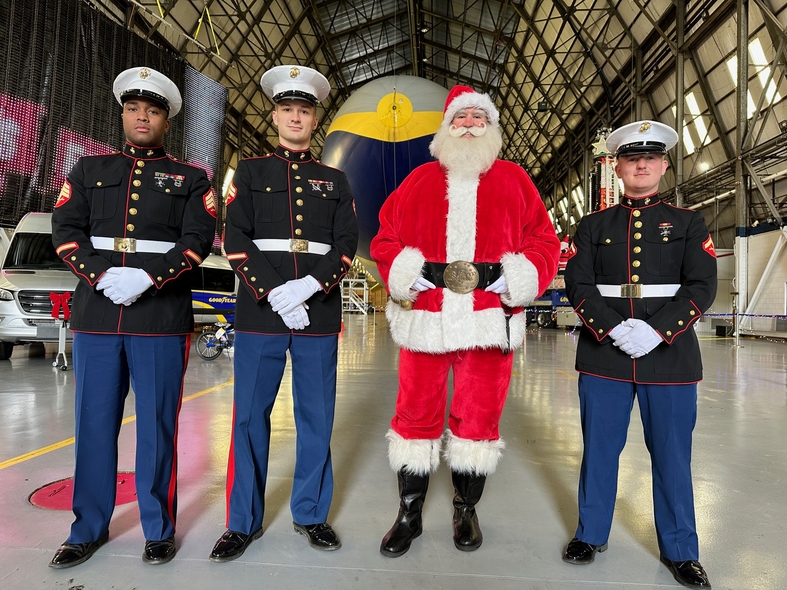 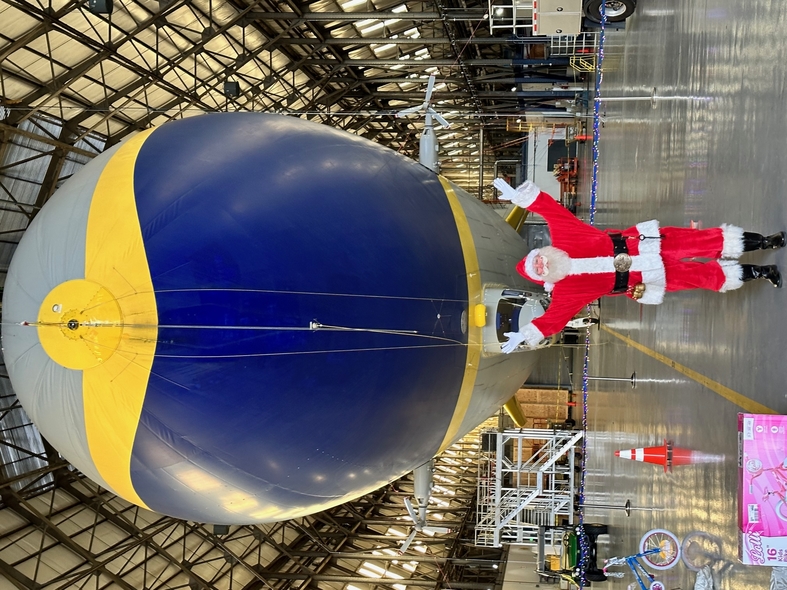 MOGADORE, Ohio—Santa's sleigh, apparently, takes a number of different forms, as evidenced by the various vehicles—most heavier than air, one glaringly large exception that was lighter than air—that have brought toys to the less fortunate via the Toys for Tots campaign.

In 1927, Goodyear spread Christmas cheer across the country with the aptly-nicknamed "Santa Claus Express," the 105-foot (at the time), iconic airship otherwise known as the Goodyear blimp.

And there were hundreds of public elves, as vehicles sat in a winding line Dec. 2 at the blimp's Northeast Ohio base, waiting for their chance to drive through the massive 800-foot-by-140-foot hangar and drop off toys as part of the U.S. Marine Corps Reserve's longstanding holiday outreach program.

"I think it's important to be associated with a reputable organization in the community like Goodyear," said Gunnery Sgt. Jess Gonzales-Webb, who, along with several other Marines, accepted the toys as the cars filed through. "They have a longstanding tradition that aligns with our Marine Corps values of honor, courage and commitment.

"The impact they have around the country is something worth modeling for many people. They are similar in that way to our institution, not just here but across the world."

Associates from Metro RTA deboard the electric bus Dec. 2 for a photo with Wingfoot One and Santa Claus. Metro RTA dropped off about 40 toys for the Toys for Tots campaign.

While the public supplied a majority of the toy donations, Metro RTA brought a literal busload of 40 toys in one e-bus, along with a gaggle of Metro RTA associates. Filling a second electric bus were children from the Kozmic Korner childcare center in Akron, all wildly excited to see the blimp, for sure, in addition to the Jolly Elf himself.

"This year at Metro, our goal was to give back to our community in as many ways as possible," Stephanie Fairchild, public relations specialist with Metro RTA, told Rubber News. "Along with our Toys for Tots donation at the Goodyear blimp hangar, we also partnered with Akron Public Library on Giving Tuesday, where we gave out thousands of clothing items and books at our downtown Akron Transit Center. All of the clothing was graciously donated by our team members."

Metro RTA also sponsored 15 local children through Open M earlier this year, and the organization's transit police officers have participated in Christmas with a Cop, where they were able to take two local children Christmas shopping.

"We immensely appreciate our selfless team members who were able to partake in our giving back initiatives," Fairchild said. "We take pride in providing fair and equitable transportation to our community—a community that has kept us moving for many years.

"Giving back to those in need is what Metro is at its core, and we pride ourselves in improving the lives of others, especially during the holidays."

Subscribe to Rubber News now for award-winning news and insight.

Santa peeks his rosy head into the Metro RTA bus, surprising the children from Kozmic Korner.

The Toys for Tots week began last Thursday at the hangar for Goodyear, where the world's third-largest tire maker hosted the University of Akron's Driving Opportunity Scholars Program members and their mentors.

The festivities off the shores of Wingfoot Lake continued into Friday, with the official visits from the U.S.M.C. (the Marines are stationed at the joint U.S. Army Reserve Base in nearby North Canton), Santa, Buddy the Elf and Metro RTA; and concluded Saturday with another drive-through drop off involving local car and motorcycle clubs.

The toy drive—the 12th year for the partnership between the Marines and Goodyear—concludes Dec. 10, with collections at the Goodyear blimp bases in California and Florida, Goodyear said. California blimp fans can register for a tour spot at bit.ly/blimptour.

As such, a total number of toys collected this year was not yet known.

"I am comfortable saying that it's on track to be our second-largest donation ever, only behind the unique circumstances of 2020," Daniel Smith, Goodyear airship public relations and logistics specialist, told Rubber News. "We couldn't be prouder of the support from the community and blimp fans all over."

Toys being donated must be new and in the original packaging to be accepted.

"We are excited to once again be able to provide visitors unique access to the Goodyear Blimp for a wonderful cause," said Laura Duda, Goodyear's senior vice president and chief communications officer. "The relationship between the airships, the U.S. Marines Corps and the Toys for Tots Program has continued to grow, and we are thankful we can support children receiving much-needed toy donations during the holiday season."

Collectively, Goodyear and the U.S.M.C. have delivered nearly 200,000 toys and more than $525,000 to benefit Toys for Tots over the dozen-year collaboration.

"As we celebrate our 75th year of assisting children in need, we are thrilled to welcome Goodyear back for their 12th year as a national corporate sponsor of the Marine Toys for Tots campaign," said U.S.M.C. Col. Ted Silvester (retired), who is vice president of the Toys for Tots Foundation. "Their community service goals continue to align with those the Marine Corps has promoted for over seven decades. With their generous support we will be able to fulfill the Christmas dreams of thousands of less fortunate children who might otherwise be forgotten."

Founded in 1947, the mission of the U.S. Marine Corps Reserve's Toys for Tots Program is to collect new, unwrapped toys during October, November and December and distribute those toys as Christmas gifts.

Donation details are available online at http://www.goodyearblimp.com/, by visiting the Goodyear Blimp Facebook page or by calling 800-321-2136.