While tires clearly reign supreme in the rubber product world in terms of sheer size, a compelling case can be made that molded goods are at the heart of the non-tire rubber goods space.

Now available in the data store 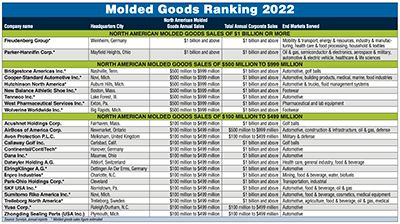 Not only are molded goods used in virtually every area of life, the types of companies that make all or part of their living by molding every shape imaginable run the gamut from billion dollar firms down to the small shops that do $5 million or less in annual business.

As we did earlier with our ranking of North American custom mixers, Rubber News decided to ask for a range of sales, rather than an exact figure. That was done to encourage a higher percentage of participation, as exact revenue levels were not requested.

The firms then were grouped alphabetically within one of eight annual revenue ranges, which were based on data from annual reports, along with survey responses. Companies needed to have a manufacturing presence on the continent to be eligible for the ranking.

In the end, two of the largest names in non-tire rubber product manufacturing sat atop the ranking, as Freudenberg and Parker-Hannifin Corp. both were estimated as having $1 billion or more in annual sales in the sector.

Many of the firms that responded to Rubber News work in the injection molding space, using equipment such as this Desma machine for their work.

Both firms also were prominent in the Rubber News Top 50 North American Rubber Firms, with Freudenberg at No. 7 and Parker at No. 5. In addition, Parker—a major player in sealing and O-rings—was the top firm in the inaugural ranking of Worldwide Hose Producers, with estimated sales of $2 billion in that sector.

Following these companies were seven firms estimated to have between $500 million and $999 million in molded goods revenues in North America. That included three that make a large share of their sales in the all-important automotive market: Cooper-Standard Automotive Inc., Hutchinson North America and Tenneco Inc., which includes the Clevite Elastomers and former Federal-Mogul businesses under its umbrella.

A total of 15 companies posted molded goods sales of between $100 million and $499 million.

They included two producers of golf balls, with Acushnet Holdings Corp., manufacturer of top brand Titleist, and Callaway Golf Inc. Bridgestone Corp. (in the $500 million to $999 million grouping) also makes golf balls in the U.S., along with a wide variety of other goods.

Another eight firms in the $100 million to $499 million range do some or most of their business in automotive. They include AirBoss of America Corp., which also makes molded rubber goods as part of its defense offerings.

Eight of the 15 companies in this range are U.S. subsidiaries of foreign firms.

Looking at the 16 companies in the five groupings of firms with less than $100 million in sales, most are part of the smaller firms that continue to play a vital role in the rubber industry, often making custom goods in a certain niche, or having a technology that allows them to compete among the larger players in the sector.

A good number supply automotive or transportation, but a wide variety of other end markets are served, such as oil and gas, aerospace, construction, military and many others.

It also includes some older, well-known names such as Vip Rubber & Plastic Co., which is more than six decades old, and four of the firms have had their leaders named Rubber News Executive of the Year.

Of those firms returning surveys, all used silicone as one of the elastomers in their business. Other popular rubbers included EPDM, NBR, chloroprene rubber, natural rubber, fluoroelastomers, SSBR, BR and IIR.

As far as end markets, nearly all served industrial markets of some kind, followed by agriculture, oil and gas, automotive, food and beverage and medical.

Molders in the ranking have been active both in mergers and acquisitions, as well as expansions.

The biggest overall deal was the public firm Tenneco being acquired by private equity firm Apollo Global Management for $7.1 billion.

After striking a deal to sell its Wheel Systems business to Yokohama, Trelleborg turned around and bought Minnesota Rubber and Plastics for $950 million, a deal finalized in late October.

Swiss firm Datwyler Holding A.G. expanded its North American footprint with the $625 million acquisition of the Northeast Ohio-based QSR business of Q Holding. Datwyler also was active with expansions, upgrading its LSR capabilities at a plant in Silao, Mexico, along with what it called "continuous expansion of production capacity."

A number of the mid- to smaller-sized firms also reported expansion projects, including:

Rubber News will look to expand on this initial ranking throughout the next year by using more research vehicles and adding to the number of companies answering surveys. For more information or to fill out a future survey, contact Editorial Researcher Robin Clark at [email protected]