KNOXVILLE, Tenn.—For the past two decades, Continental Carbon Co. has really been on the sidelines in terms of innovations in the carbon black industry.

The Houston-based firm had been content to have the staff at its Technology Center support its customers and its own production facilities. It treated its offerings in the carbon black sector as commodities, with no real added value to speak of.

In fact, it had been so long since it had exhibited at the ACS Rubber Division's International Elastomer Conference that the firm was listed as a first-time exhibitor at its booth at the expo in Knoxville.

But the appearance at the IEC is to serve notice to its competitors in the carbon black field—along with its customers and potential customers in the tire and rubber product industry—that its research and development team is active again and ready to start rolling out its new innovation, according to Ed Vega, director of Continental Carbon's Technology Center in Houston.

Dubbed Continext-LH, the company said the development is a carbon black series that is highly engineered and simultaneously improves all three properties of the tire industry's "magic triangle": rolling resistance, treadwear and wet traction.

Vega said what Continental Carbon is looking to bring to market has been in development for the past five years, will compete in areas that silica has dominated for the past two decades and will do so without some of what he said are the shortcomings of silica.

First of all, he said his team at the Technology Center has developed a tunable technology that can be tweaked to wherever the customer needs the most help.

"We find we can change the operational conditions for the manufacturing of this material and tune it to a customer's requirements," Vega said. "If the customer wants improved rolling resistance over other performance properties, we can do that. We can improve the treadwear over the other properties.

Vega has been in the polymer industry for a bit over 30 years. He worked for about a decade in polyethylene catalysis with Chevron. He then spent the next decade in carbon nanotubes, where he worked in R&D and manufacturing for Carbon Nanotechnologies. That was the firm co-founded by Richard Smalley, renowned Rice University professor who shared a Nobel Prize for Chemistry for discovering a new spherical form of carbon and championed the potential of nanotechnology to create a more sustainable economy.

And for the past 10 years, Vega has been with Continental Carbon, serving as director of the Technology Center since 2015.

But the charge for the center has been much different since 2017, when Vega said Dennis Hetu took over as the carbon black firm's president and redirected the vision of the Technology Center. No more focusing as a support group for what some would call "me too" carbon black lines, the center would look to re-incorporate innovation and R&D work.

The team at the Conti Carbon center is small—nine including Vega—but they were given a lot of leeway in what they wanted to pursue. "There were no marching orders," he said. "This was left up to my team and myself to decide in which direction we would move. It just basically had to be a carbon-based item that we could add to our portfolio."

Vega said this was an excellent opportunity for his team to stretch their legs beyond their normal customer and plant support, and look at technologies they had seen and thought about, but never had the opportunity to explore before.

More from the IEC

"What we did was go back and look at some historical information that was talked about and looked at and researched at our Technology Center probably two decades ago," he said. "And we started to understand where that path was leading their pathway at the time.

The team used the Michelin silica patents from the late 1980s and early 1990s as its baseline, with the goal to develop a carbon black that performs as well as silica does now.

While silica has been an important technology for the tire industry, it does have some shortcomings. Those include abrasion and high energy requirements for mixing, the Continental Carbon executive told Rubber News.
He added that Continext-LH mitigates those negatives, as it's not as abrasive as silica, so the mixing equipment will last longer. It also will create less downtime and allow for longer intervals for equipment refurbishment.

On the energy requirement side, Vega said it's easier to mix than silica, so it's factory friendly. 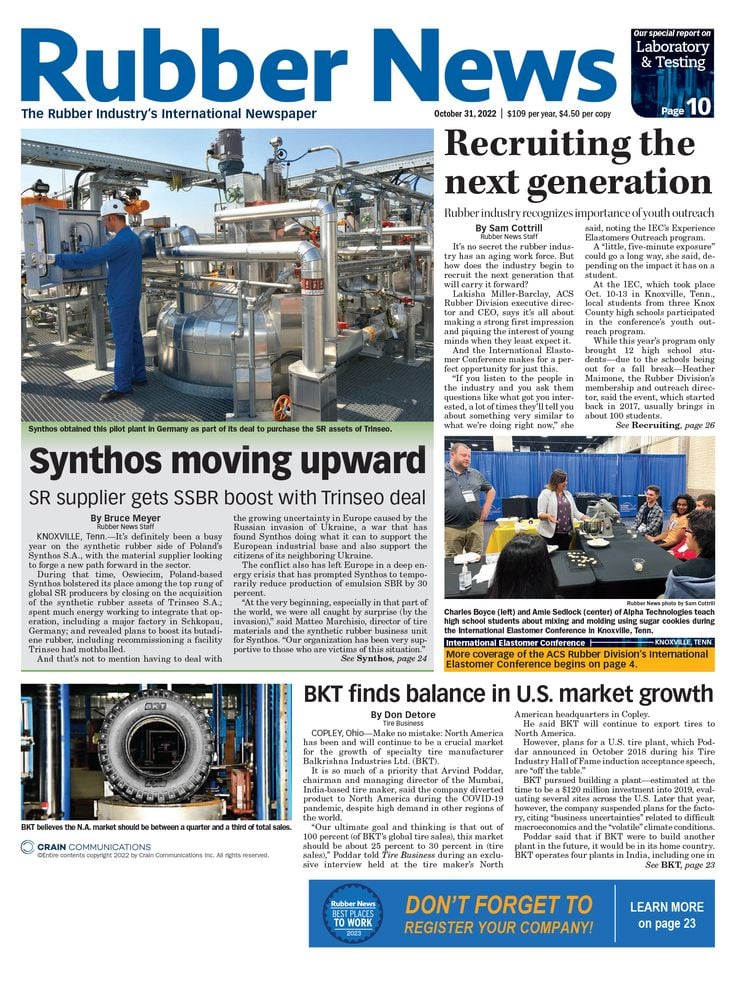 ‘Push' rather than ‘pull' technology

Often, technologies can be classified in two distinct pools. One is where the customers are clamoring for some new know-how, so they reach back to their supplier base and work with them to "pull" it forward into the market. The other is where the supplier develops something and attempts to "push" it into the market, as it tries to convince customers their "better mousetrap" will move technology in the sector forward.

Continext-LH fits into the latter category, particularly because as the Continental Carbon focus was on commodity lines for the past 20 years, Vega said it didn't have close interaction with its customers' technical teams.

"Really, the direction was more of a push than a pull," he said. "We're confident we're going down the right path because we have talked with consultants about these marketing expectations. In the end, we hope the rollout of this new technology and other opportunities will bring us back into closer discussions with technical folks at our customers' locations."

Continental Carbon did put out some general notifications to about a dozen of its customers—Tier 1 and 2 tire companies—saying it was working on some new technology, and asking if they'd be interested in sampling the new material when it became available. Vega said that was because it was applying for a grant in Oklahoma (one of its factories is in Ponca City, Okla.) that required a customer to be interested in the technology.

He said they got just one response, but that was enough to go forward with the grant application. The company finds out in December if it will get any funding.

"We've been working in a vacuum," Vega said, "because when we recognized that with the property improvement this material brings to the discussion, we realized this is not something we're ready to share with everybody just yet. We wanted to do a little bit of protection for our technology before we started talking to anyone."

Even internally, discussions were kept to a minimum. Vega said that caution comes from his time in the nanotube industry, where trade secret theft was all too common.

There are "bits and pieces" of the technology currently available in the carbon black marketplace, but nothing that puts it all together. Continext-LH is a combination of the use of a low hysteresis carbon black along with a surface modification, something he hasn't seen in the industry.

Early in the process

But now that the Continental Carbon team has been working on the technology for five years, it is ready to start testing the waters and seeing what type of interest they can get in the industry.

The firm's presence at the IEC in Knoxville was considered the rollout which, besides the expo booth, included a technical presentation on the development delivered by Ray Soufiani, the company's laboratory manager.

Vega knows, though, that there is still a ways to go before seeing Continext-LH in use in the market.

"The technology works in a lab. We haven't gotten to the point where we've put it into a tire yet," he said. "From a laboratory point of view, this has the potential to have improvements in carbon black that we haven't seen before."

Today, its message to potential tire industry customers is that the only place they can get make improvements in wet traction, rolling resistance and treadwear all at the same time is by using Continental Carbon's new breakthrough.

Likewise, while the main focus to this point has been on tires—particularly tread-grade carbon blacks—there is no reason the improved carbon blacks can't be tuned for use in other rubber goods as well, according to Vega.

While too early to put a timetable on when the new materials may end up in products in the market, he said Continental Carbon will have demonstration-scale, quality material ready to send to customers next year.

Of course, Vega knows that displacing silica in the market won't be easy, but that doesn't mean it can't be done.

"Silica has been in use for well over 20 years, and readily used. It's the king of the mountain, and it will be very difficult to supplant that," he said. "We don't expect that this will be an easy battle at all. It will be an uphill battle at all times. But you know, it took awhile for silica to grab hold and displace carbon black."

But the support of Continental Carbon's management has been strong behind the project at every step, and knows it won't make for a quick payback.