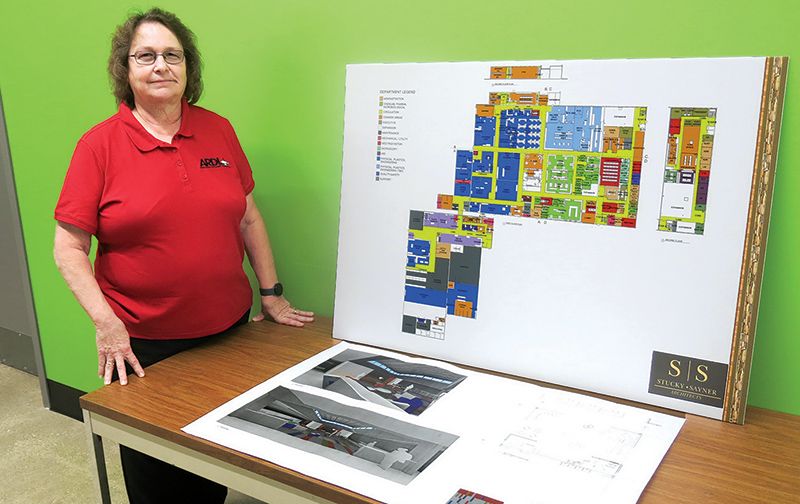 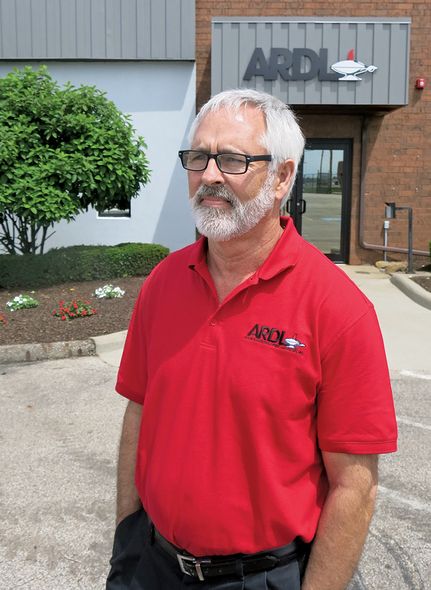 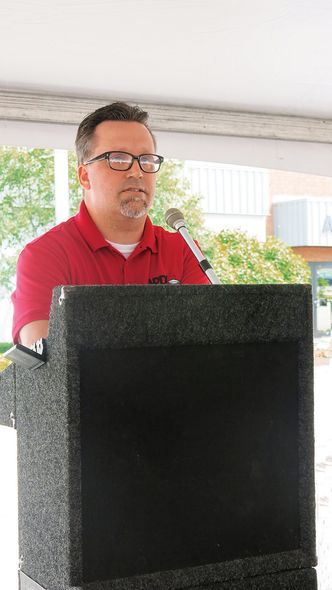 Rubber & Plastics News
Greg Simms has served as the project leader on setting up the new site for Akron Rubber Development Laboratory since 2016.
Share 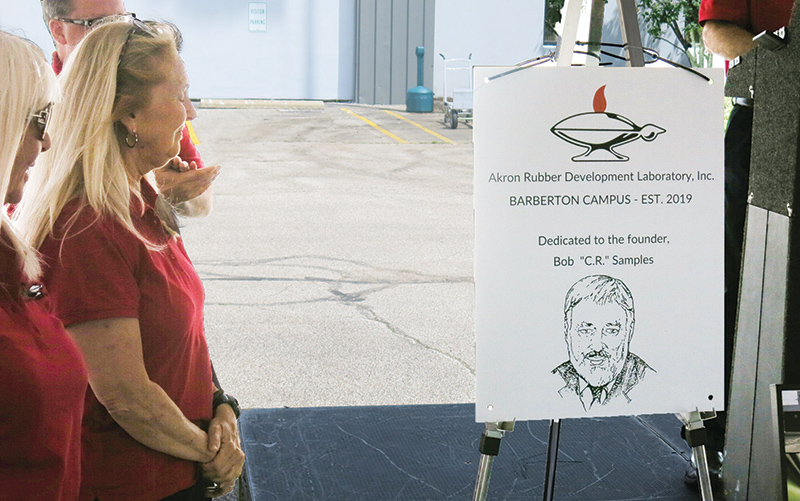 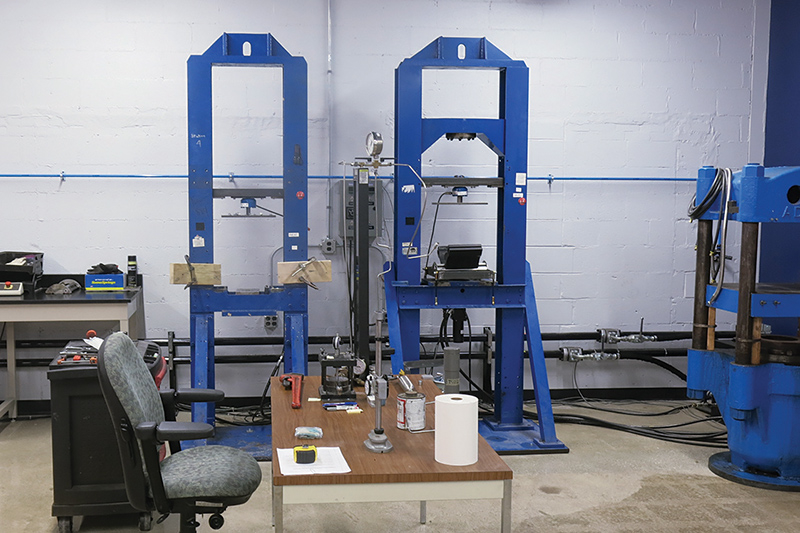 Bruce Meyer, Rubber & Plastics News
A look at some of the testing equipment at ARDL's new facility.

BARBERTON, Ohio—Nobody would ever accuse Akron Rubber Development Laboratory Inc. of not having patience.

The independent testing and development laboratory firm started searching for a new home for its business in 2014. It wasn't until 2016 that one of the firm's owners came across the 134,000-sq.-ft. building in Barberton that would become its new home.

ARDL then started the planning process with the architect in 2016-17 and lining up contractors. The design process took the rest of 2017 and into 2018, and then it was another year until the 57-year-old firm moved into the first 30,000 square feet of renovated space in the new building as the company eventually looks to consolidate from its current three buildings into just the new Barberton site.

And the timetable to move everything into the one building could stretch until 2026 or 2027, according to Greg Simms, ARDL's director of innovation and sustainability, who also has served as project leader on the move since 2016.

"We hope it doesn't take that long but we want to do it right," he said. "I don't want this project to be a weight on our company or our customers."

ARDL President Bonnie Stuck said the firm also is taking it slow with the project because the family-owned firm is financing the move as it progresses. "We want to make sure we don't put ourselves in jeopardy," she said. "But we're growing, so that's good. I think everybody is pretty much excited. It is a change, so there is apprehension, but mostly when people move over here it's like, 'Wow. This is the future.' And it is."

Years in the making

ARDL CEO Tim Samples said when his father, Bob "C.R." Samples started the company in 1962, he had been working for Hygenic Corp. He had just built a new house and had a son—Tim's youngest brother—about to be born.

A company came to him and said they'd pay him $250 a month guaranteed to work for them. So Bob Samples quit his job and before the end of the month, his new employer canceled the contract. He didn't have a Plan B, so he set up his firm and just started to work.

"When my father started the business, he couldn't imagine that it would grow into a 134,000-sq.-ft. building on 11 acres, all under one roof," Tim Samples said. "C.R. started in true entrepreneurial fashion. He did not spend much time in casinos or racetracks, but a longtime salesman with ARDL once said Bob Samples was the biggest gambler that he had known. And his risk paid off."

Tim Samples started full time at ARDL in 1973, between his junior and senior years of high school. He started running rheometers in the evening. From there he learned testing and mixing formulas and compounds, and just kept going from there.

He took over as leader of the company in December 2008, and six immediate members of the Samples family still are involved in the business, including five of the kids and their mother. The holdings also include Polymerics Inc., a custom mixer Bob Samples, who died in 2015, started in 1972.

"We get along so well," Tim Samples said. "I'm the CEO, but I'm not the oldest. I have two older sisters. We all have roles. We are completely transparent on what we do. We talk a lot and we're very emotional."

Being emotional is a trait they got from their father, Tim Samples said. "He was very soft-spoken, very emotional. He never yelled."

Bob Samples also was persistent, his son said. "You investigate every opportunity there is, whether you think it's a good one or not a good one," Tim Samples said. "Some of them work out and some of them don't. Be smart and slow."

That is something ARDL leaders took to heart in pursuing their new home. Tim Samples said the firm looked at different properties before deciding on the Barberton facility.

"This will bring us all under one roof, and we haven't been under one roof in 15 years," he said. "So it's really going to increase our efficiencies. We were completely out of room. We could not add people or equipment. We have equipment in warehouses that we can't add because we don't have a desk to put it on."

Employment for ARDL is about 105 and shouldn't change for awhile, he added.

Simms said the original search found only 10 buildings in the region ranging from Canton, Ohio, to Cleveland that met its requirements, until the Barberton facility came into the discussion. One of the problems was that it wasn't located in Akron, where ARDL operated out of three separate buildings.

"We had to put that in deep consideration for awhile," Simms said. "We're very tied to Akron and had to work through that discussion. What we came to was that no matter what community we're going to be in, we're always going to be Akron Rubber Development Lab. Our roots will always be in Akron, so we should find the best community that will help us serve our customers. And we found that home in Barberton."

One of the stumbling blocks with finding a suitable place in Akron was in obtaining assistance with funding. Simms said Akron didn't have many mechanisms to help the testing and development firm stay in the city because it wasn't adding tremendous amounts of new employees.

But because ARDL would be bringing 100 jobs over time to the nearby community of Barberton, that city was able to do more in terms of financing.

The total investment in the property thus far is $4.7 million, including a $2.5 million loan through the Barberton Community Development Corp., Simms said.

And because ARDL was moving into an older building, it qualified for long-term project financing through the Project Assessment Clean Energy program, where the amount of funding is based on projected energy and water savings over the next 15-20 years, Simms said.

Once the deal was closed on the factory structure, he said every department of ARDL was involved in the process of deciding how the new home would be set up. "The goal was to come up with a master plan that would work well for everybody. One roof, one floor," said Simms, a 10-year ARDL veteran. "We're not used to that because before with the three properties, those people weren't used to working on the same floor with each other.

"We kind of had to re-think how we do lab operations. What things we've learned over time, how a building works for us or doesn't work for us. Then we had to put that all together in a master plan."

ARDL initially was looking for nothing larger than 80,000 square feet, and Simms said with the selected site being 134,000, officials thought there was no way they'd ever use that much space. But once the master plan was complete, the firm had hit 107,000 square feet in terms of utilization.

Of course, it will be some time before that much will be in use. In conjunction with the site's recent grand opening, the engineering and technical advisory groups moved in, taking up just 30,000 square feet.

Stuck said ARDL will be able to do much of its testing, including dynamic mechanical analysis, along with sample preparation at the Barberton site. As a member of the technical advisory group, she will be splitting her time between all the ARDL sites for the time being.

The next to move in will be the compounding mixers and mills. Work is ongoing, Stuck said, to prepare the new building for these operations, with the transfer expected to happen sometime by mid-2020.

The last units to move will be the chemical and microscopy labs because they are the most intricate, she said.

"It will be a showplace when we're done," Stuck said. "We wish we could have stayed in Akron, but there just wasn't a building. Akron tried but it just didn't have something that was suitable to put labs in."

But as has been the case throughout its history, ARDL won't be in a rush to complete the move before it's ready. Hence the potential finish sometime around 2026-27 timeframe.

"As we get farther down the road, our customers should start to see the impact because we're getting more people under one roof and more of our company together," Simms said. "That should result in better communication internally on our staff and more efficient operations, and the customers should see faster turnaround. I think those two things are very important to them."