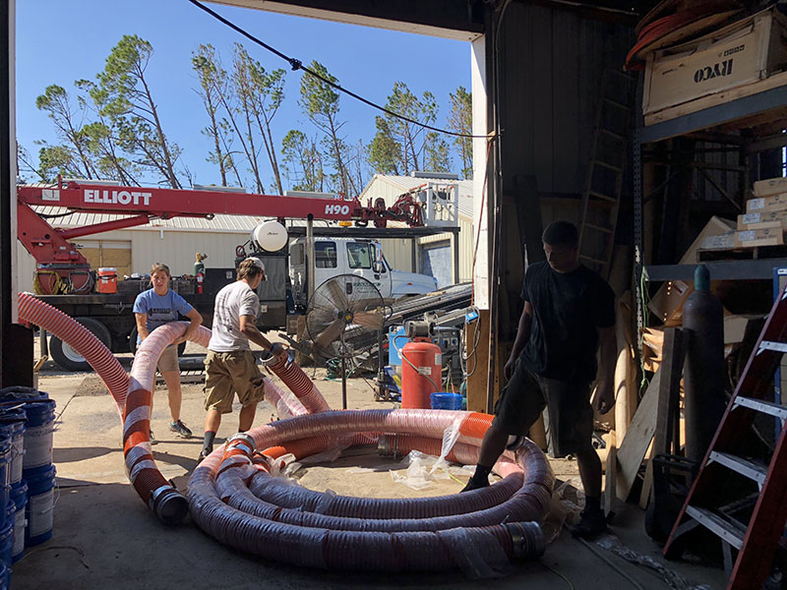 From left, Cristina, Jake and Stephen Carr work to keep operations going in the wake of Hurricane Michael.
Share 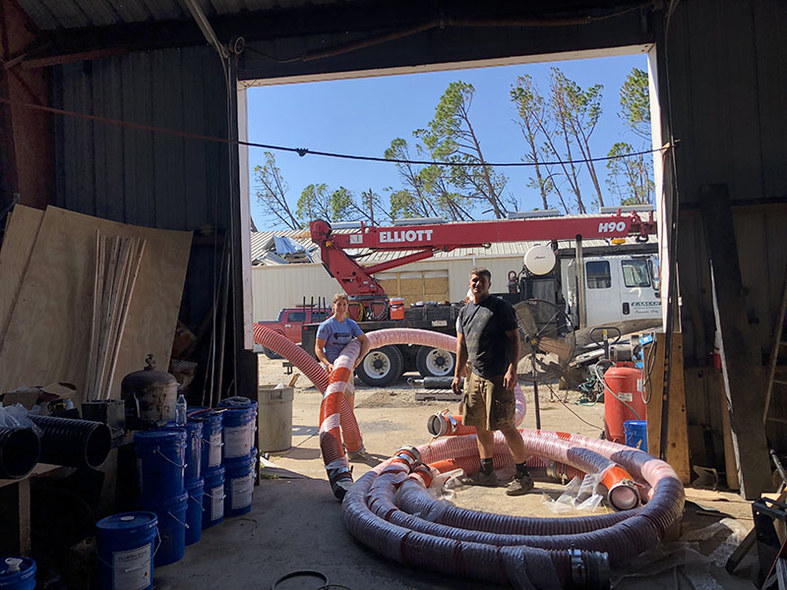 Cristina and Stephen Carr work to keep the business running in the aftermath of Hurricane Michael.
Share 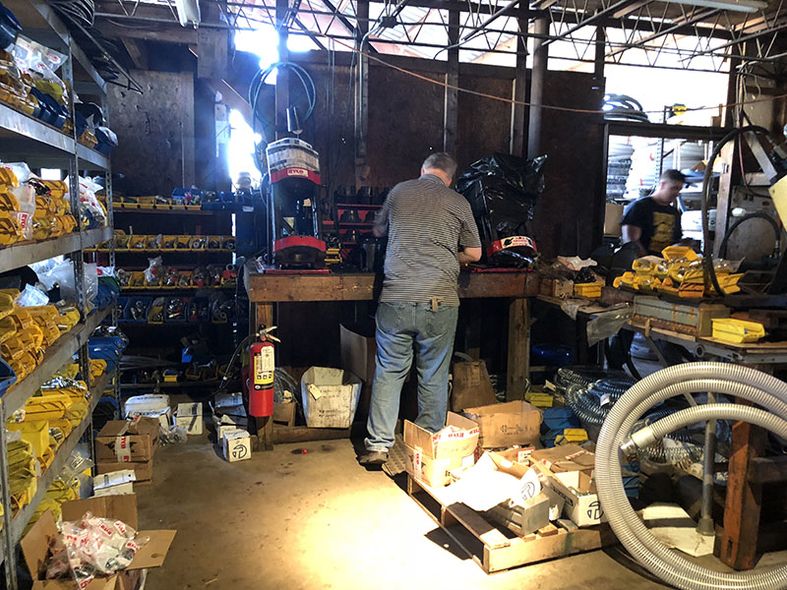 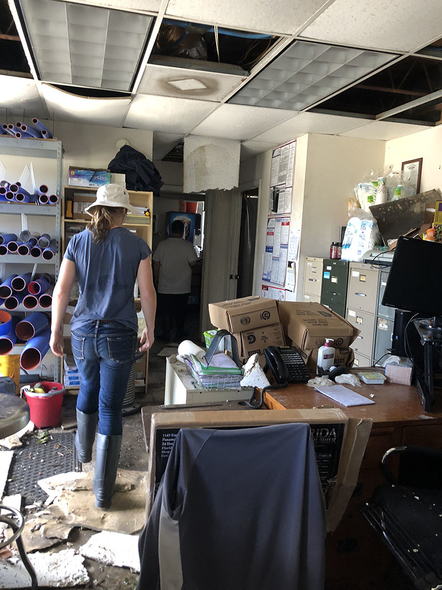 Christina Carr works in the office after the hurricane roared through.
Share 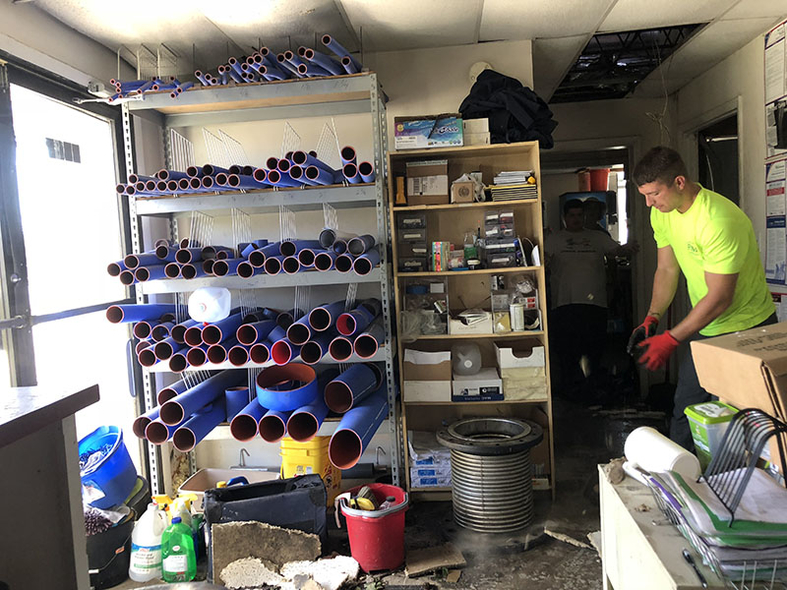 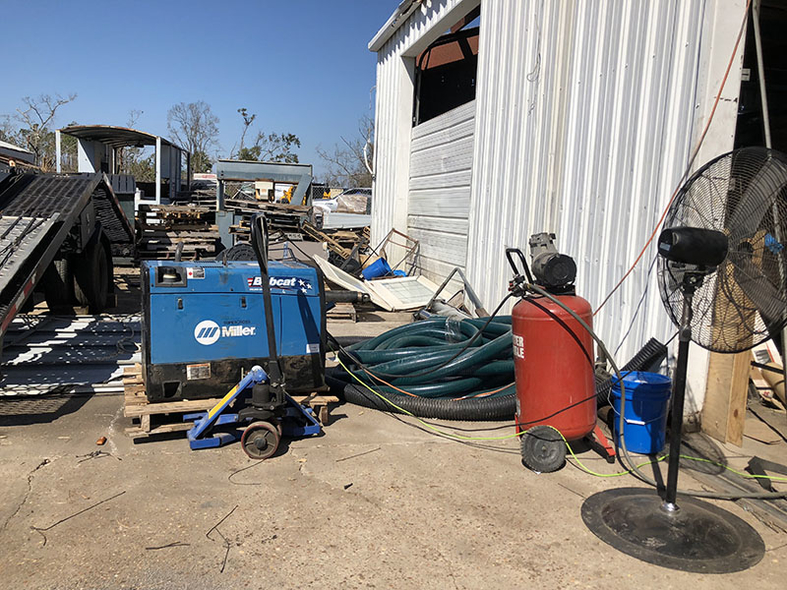 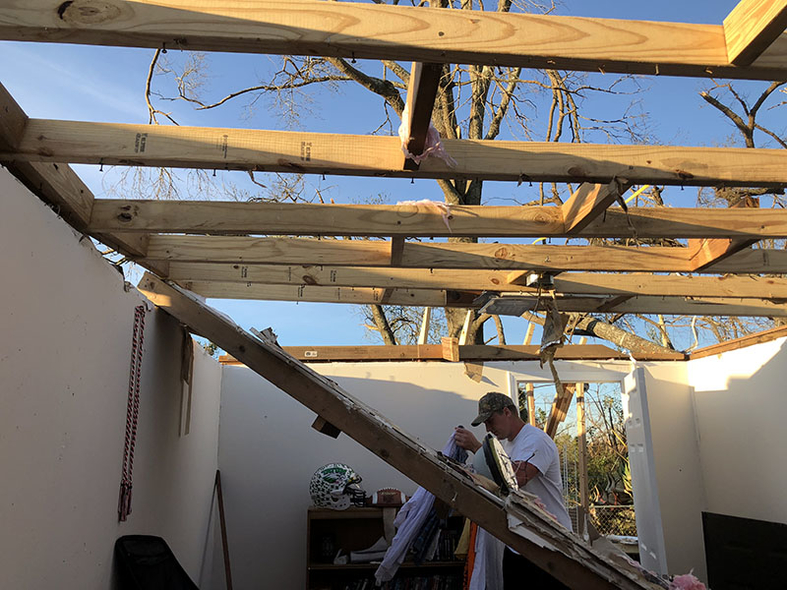 Many had their homes devastated by Hurricane Michael.
Share 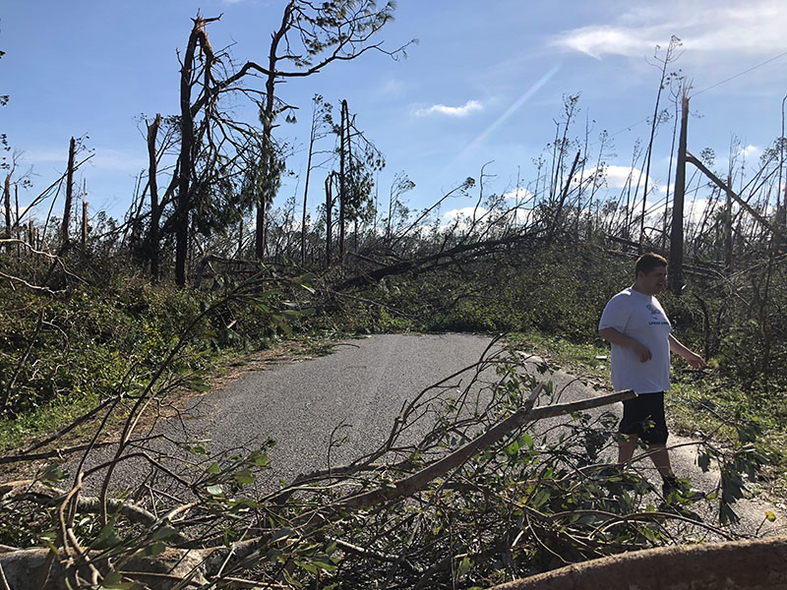 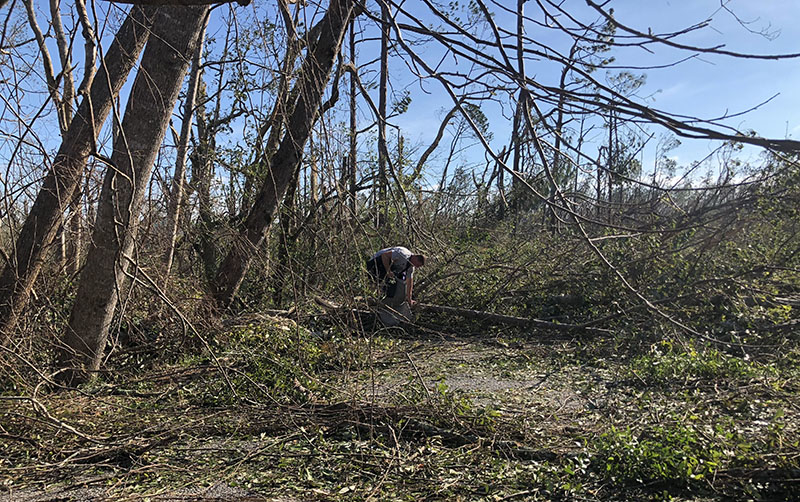 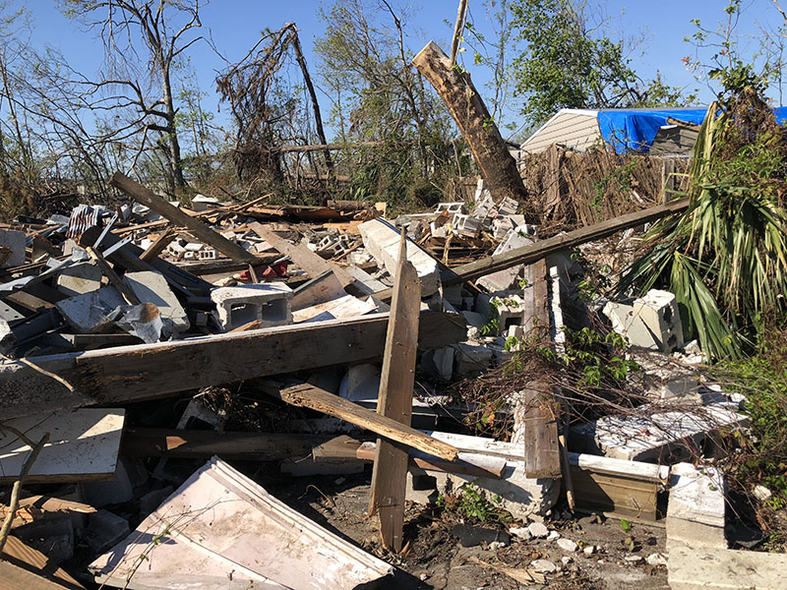 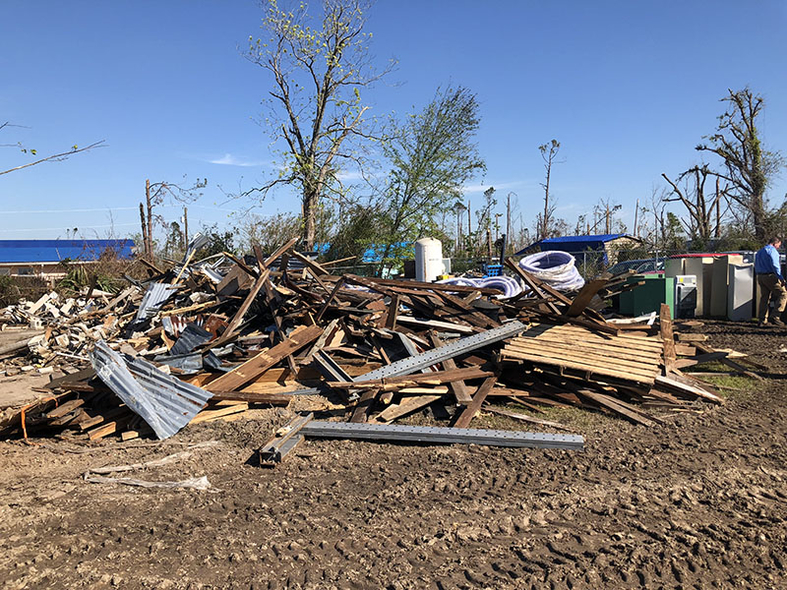 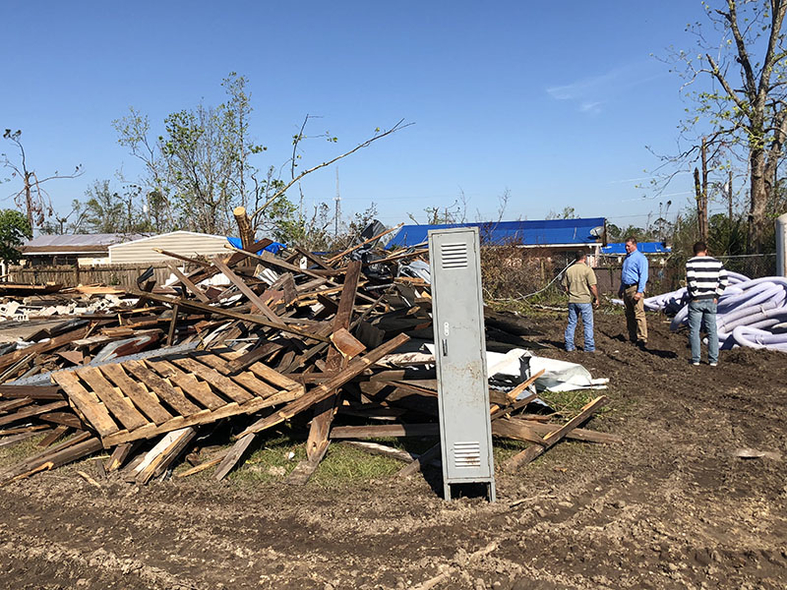 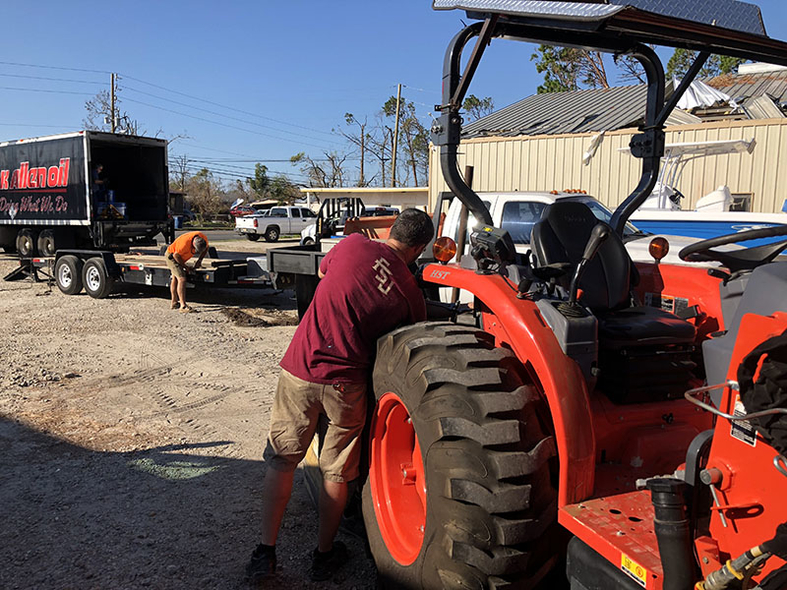 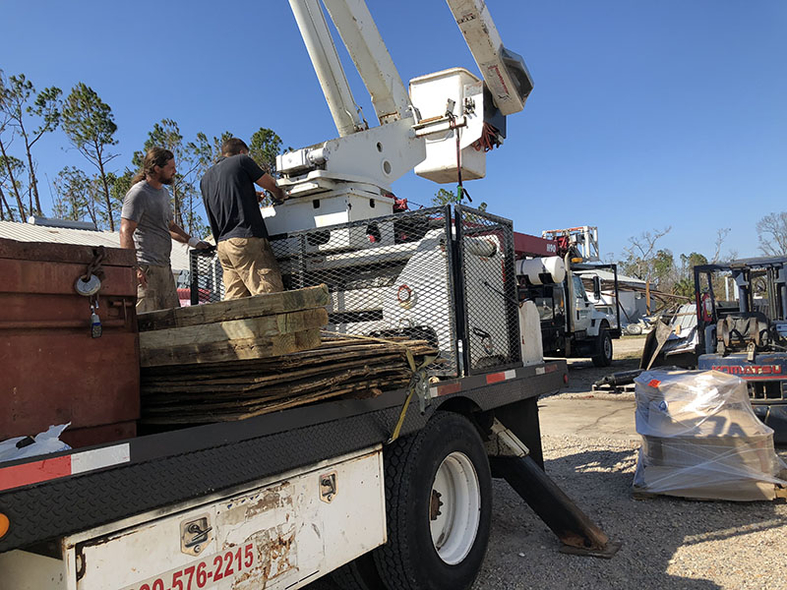 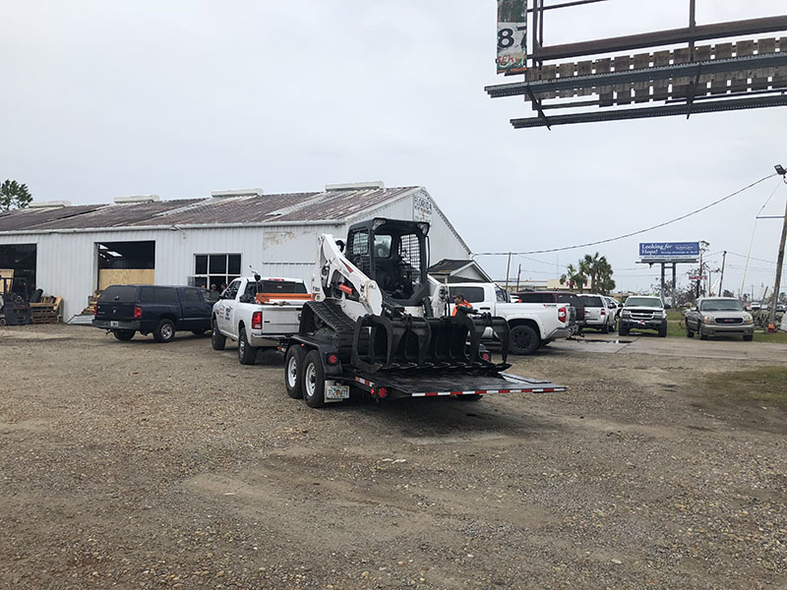 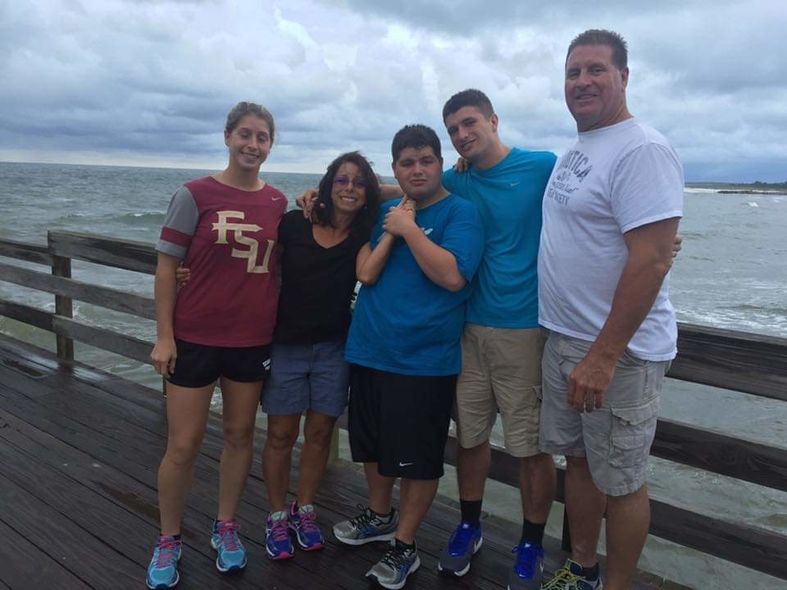 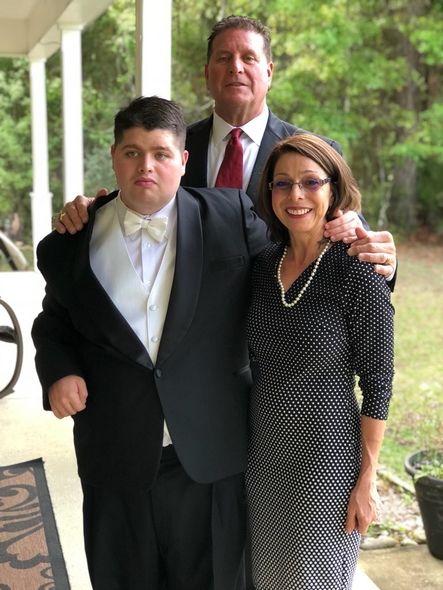 Clockwise, from left, are Daniel, Jimmy and Susan Carr.
Share 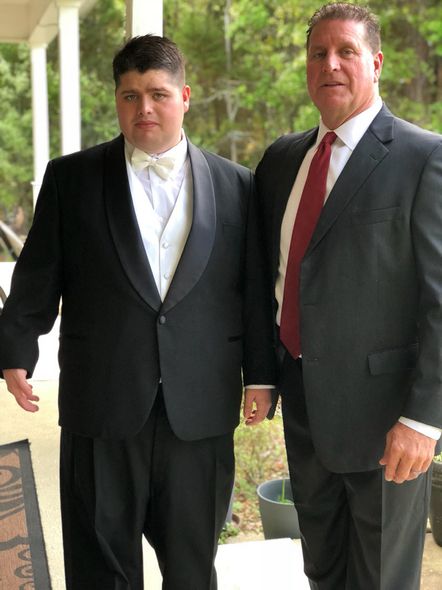 PANAMA CITY, Fla.—It's a good idea to be prepared for the worst, and fortunately Florida Hose & Rubber was.

The firm was able to effectively handle an estimated 300 percent increase in demand because of the impact of Hurricane Michael in October 2018, a Category 5 hurricane that's gone down as one of the most destructive disasters to hit the Florida Panhandle region in more than a generation.

"When it came, we were ready for it," said Jimmy Carr, the company's owner.

Florida Hose & Rubber has been part of Panama City and the surrounding community for two decades, celebrating its 20th anniversary in March. It is an industrial supplier of hydraulic, chemical, water, sewer and suction hoses that also provides pipe fittings and a full range of repair work. Carr's company also is a distributor of name-brand products.

Yet by March, and even up through today, the entire Florida Panhandle community still is recovering from Hurricane Michael, which ripped through the area with winds of up to 160 mph, causing an estimated $25.1 billion in damages throughout the U.S. and Central America. It damaged several U.S. fighter jets with a replacement cost of about $6 billion at Panama City's Tyndall Air Force Base, and well over $6 billion in insurance claims have been filed in the U.S. alone as of earlier this summer. Losses to agriculture have exceeded at least $3.8 billion.

Carr said it took more than 270 days before the region received emergency funds from FEMA and that roughly 17,000 light poles were reinstalled in the area just in the first two weeks after the hurricane hit.

"Every single electrical power pole in the city was down," said Carr, who founded the business in 1999 after spending several years as an assistant coach for multiple college football programs. "We didn't have power for weeks, but that was only the start. Our power boxes were pulled off the building. The fire department had broken into our building in an effort to find materials that could help save lives. They wrote a note to us on our walls."

Tractor trailers, boon trucks and utility trucks, and anyone who might need a hydraulic or similar hose, stopped by Florida Hose & Rubber. With other powerful hurricanes and tropical storms having hit the Southeast in the preceding weeks, some new customers were arriving from other states, even though most of the company's business historically had been generated locally. Cleanup already had begun throughout Panama City, but the number of vehicles and boon trucks that had suffered damage was unprecedented so repairs were needed immediately.

There was one problem.

"We couldn't build anything really. We had no power, and neither did anyone else," Carr said. "For a bit we were running on hand pumps."

Fortunately one customer from South Carolina brought a Bobcat generator that it essentially loaned to Florida Hose & Rubber for several weeks. That, along with smaller generators, allowed the company to run crimp machines, lighting and other operations to complete repair work. All 10 full-time company employees, and even some other family members, pitched in for weeks at a time, working long hours in an effort to meet the demand for hydraulic hoses and other repairs.

"In some cases our facility lighting was nothing more than strands of Christmas lights we hung around the warehouse," Carr said.

The team at Florida Hose & Rubber used whatever they had available to build or rebuild hoses, cylinders, pumps and even motors. There were no appointments. But that's the type of business Carr has built over the last two decades—one that serves custom needs.

"It was a great way to celebrate our anniversary I guess," Carr said.

The influx of work is expected to roughly triple the company's revenue for the current fiscal year, and while Carr understands business may slow a bit, he is putting some of that money into further investments. A neighboring company left the area in the wake of Hurricane Michael, and Carr is finalizing negotiations on that adjacent $1 million piece of property that includes an existing 22,000-sq.-ft. building, which will help Florida Hose & Rubber address its need for additional space.

Several companies during the past few years, including some in recent months, have expressed an interest to acquire or merge with Florida Hose & Rubber, but Carr said his focus remains on building his existing business. He relies on a strong group of experienced employees who have helped the company to achieve revenues of more than $3 million. Carr also has no interest in moving away from Panama City and benefits from owning a company with no debt.

"It was amazing the way this community came together around this storm and just pulled for each other," Carr said. "Panama City took care of its own."

Carr also knows how to take care of his own. He often helped his father, Jim, as a high schooler at his father's former employer, Chattanooga Rubber and Gasket, before attending Tennessee Tech University on a football scholarship. He spent a few years as a strength and conditioning coach at Trinity Valley Community College in Texas and Florida State University, where he was a part of multiple national championship teams.

Yet when he and his wife were pregnant with their first child, they both knew a lifestyle change was needed. So Carr went back to help his dad in the rubber business in Alabama before launching Florida Hose & Rubber.

"My dad had a restaurant business after a few years away from the industry and sold that, so I went back to help him out and one thing led to another," Carr said. "I had always thought to myself in high school that if I could ever get out of the rubber business I'd never come back. Years later I figured out though it's what I knew."

The journey hasn't been without its challenges. Carr admits he's made "every mistake you can make in the business," but has been able to survive and eventually thrive largely because of a focus on service and customer satisfaction. Florida Hose & Rubber historically has managed a robust front counter business in Panama City and has been known for providing custom-made hoses, assemblies and fittings, among other items. Florida Hose & Rubber can crimp up to six inches in its main shop.

"We're just going to keep going from here," Carr said. "Hopefully we won't ever have to deal with anything like Michael again."