FAIRLAWN, Ohio—Continental long has claimed a stake at the top of the industrial rubber hose market, but lagged when it came to the larger hydraulic hose arena.

But the company's ContiTech business is looking to make major inroads with hydraulic customers with the $40 million hydraulic hose factory it plans to build in San Luis Potosi, Mexico. It said construction on the facility will start later this year, with production slated to begin in 2024. Employment is expected to reach 150 when the operation is at full capacity.

Conti officials said they are looking for over-proportional growth in North America, and the German parent company wants to boost the share of non-automotive business in its portfolio. So the project fits the bill in both cases.

The Mexican facility will provide additional wire braid and wire spiral hydraulic hose capacity to support growing business across North America. The hoses are used in hydraulics products that support such industries as agriculture, construction, energy management, commercial and off-highway vehicles, and manufacturing.

"The new facility will allow us to further expand our hydraulics business with the most compelling portfolio of hoses available and continue to strengthen our commitment to our customers and the North America region," said Andreas Gerstenberger, head of Continental's global Industrial Fluid Solutions (IFS) business area. "It underlines our strategic approach to be the top performer in our markets."

Conti added that the new facility will utilize the newest technology, designed to reach the highest possible manufacturing efficiency, and include Industry 4.0 standards to connect production with modern information and communication techniques. Sustainability also will be designed into the factory, the firm said, with a new level of energy efficiency, innovative product processes and highly efficient utility generation.

When ContiTech in early 2015 completed its purchase of Veyance Technologies Inc., which did business under the Goodyear Engineered Products brand, both companies' non-automotive hose business largely was based in industrial applications, though each did have a bit of hydraulic hose business.

Both also had some hydraulic hose production, with manufacturing in Germany, China and in the U.S. in Norfolk, Neb.

"We made a conscious decision in our strategy that part of our over-proportion of growth target as a business area has to come from businesses outside classical industrial hose," Gerstenberger told Rubber News at his office in Fairlawn.

Andreas Gerstenberger (left) and Guy Enta at the Continental office in Fairlawn, Ohio.

He said it's similar to the approach Conti took when expanding capacity in thermoplastic hose to complement its leading position in rubber industrial hose. The business area's growth has included acquisitions of Custom Crimp in 2017 and, two years later, of Italy's Merlett Group, a manufacturer on the thermoplastics side of the market.

The Industrial Fluid Solutions business area is one of the few units within Continental, he added, where 100 percent of sales already are non-automotive. So the board and upper management, including ContiTech CEO Philip Nelles, have been supportive with the IFS expansion plans.

Of Continental's five fields targeted for growth, two are automotive related (electric vehicles and commercial vehicles), and the other three are industrial: construction and home, energy management and off-highway, all of which have areas where hydraulics play a role, according to Guy Enta, a vice president and head of the Americas region for IFS.

Acknowledging that Continental isn't in the top five globally in hydraulic hose, Gerstenberger said the firm looked for potential partner candidates or acquisition targets in hydraulics. It had several serious discussions but, due to a variety of factors, couldn't find the right fit.

"We didn't find a target. Like dating, it takes two to tango," he said. "Since that was not in our cards at the time, we decided we will build our own greenfield."

The search for potential locations included some in the U.S., but the firm ended up choosing Mexico for a couple of reasons, including the fact that Conti already has several facilities there in automotive and industrial, including in tires and other areas of ContiTech, Gerstenberger said. Conti, overall, employs more than 5,000 in Mexico.

He added that IFS already has plants in the U.S. and Canada, so this will help better balance its production across the continent. Most of the production will be to service business in North and South America, with the bulk—in the 90 percent range—likely going to North America.

While Continental hasn't been a big player in the hydraulic hose sector, Enta said growth has pushed the firm to the point were it needed to invest in the business.

"Even with the smaller footprint, we were growing consistently double-digits every year, and it became clear to us that we were going to run out of capacity with the manufacturing we had," he said. "So we wanted to get in front of it, ... and it came time to take our destiny in our own hands."

Gerstenberger said there are pros and cons for either building new or acquiring an established production site. "Traditionally, if you grow something yourself, then it generally takes more time. On the other side, you know what you build, you run it yourself and you have full control," he said.

The new factory will significantly boost Conti's hydraulic capacity, though officials wouldn't say by how much.

"We feel it will move our position by market share up several positions once we ramp up to full volume," Enta said. "We have had to turn down opportunities because we want to make sure we can supply them to those customers.

"So there are opportunities out there. We've had to tell our sales team to sort of put the brakes on a little bit so we can build up this capacity."

A good portion of hydraulic hose business for Conti is expected to come from customers the manufacturer already does business with on the industrial hose side.

"People know the brand. We have people, we have an organization in all three countries," Gerstenberger said. "We think with the business we already have, the knowledge of the market and the customers, that besides our current solutions we can offer more on the hydraulics side, that we have tremendous potential in the region."

While this project is focused on the Americas, Gerstenberger said Conti's IFS business also has potential for growth in Asia and Europe as well.

"We are doing in the other two regions exactly what we are doing here," he said. "We are looking at opportunities to grow in those fields we have described, and all options are on the table for that. We have hydraulic production in Europe, and we have it in Asia. We just want to have more of it."

In normal business conditions—discounting such outliers as COVID slowdowns in China or the war in Ukraine—Gerstenberger said Conti is operating at capacity in hydraulics in Europe and Asia. But making sure it is "profitable growth" means the business unit won't move too quickly.

"Growth is very important. Creating value is even more important," he said. 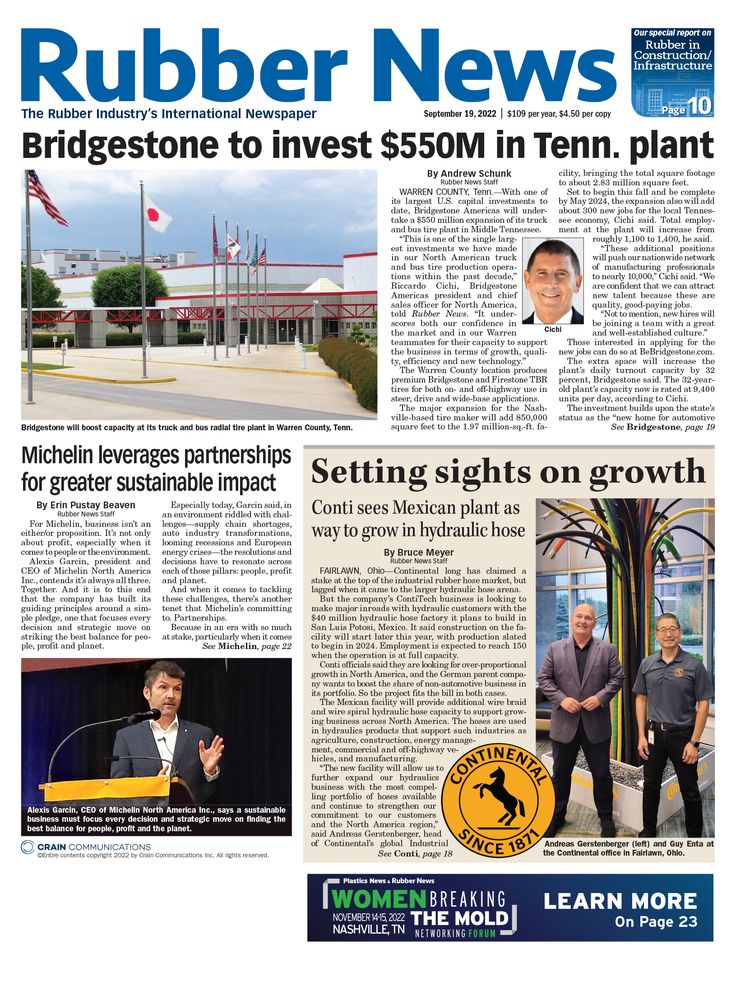 The Conti IFS officials made it clear the factory not only will be far larger than their current hydraulic operations, it will have the latest technology available. That includes certain elements of a smart factory and digitalization, as well as the firm's latest ideas and solutions related to sustainability.

With what is available on the technology side, Enta said it made sense to build new rather than expand at an existing factory.

"We just felt it was better to start with a blank canvas and not make the process and the equipment fit the building, but design the building around the optimal equipment and process, and that's why we decided on a greenfield," he told Rubber News.
Sustainability efforts at the San Luis Potosi site also won't be an afterthought, but built in from the get-go, according to Gerstenberger. Like digitalization, he said sustainable operations will be licenses to operate in the future.

"If you're not sustainable long term, it will be difficult for any company to stay in business," he said. "We believe sustainability needs to be part of our culture and DNA moving forward.

"... Consequently, if I build a new factory, I think we all have the duty to do it as sustainable as we can, and as we can afford. Whether it's solar panels, whether it's water management, lighting and energy, raw materials or minimizing packaging."

It also means being a good citizen in your community, Gerstenberger said, adding that it's not only a "green" headline, because sustainability is more than just "green."

"It's profit, people and planet, not in any certain order," he said. "If you're not profitable, you're also not sustainable. That's what some people forget."

This isn't an initiative, however, that the Conti IFS business is starting with this plant, said Randy Kish, manager of distributor marketing and communication at ContiTech U.S.A.

"This has been our mantra and our efforts over recent years," he said.

Not unlike other companies in the market, Continental has had to deal with significant cost impacts in the sector. It started with the trade war between China and the U.S., which Gerstenberger said nobody talks about anymore, but the 25-percent tariffs remain in place.

That was followed by the COVID-19 pandemic, which shook up the supply chain and the availability of certain raw materials. "In the meantime, we have a shortage of people," Gerstenberger said. "It's difficult to find enough work force in manufacturing."

The business term for it is "VUCA," standing for volatility, uncertainty, complexity and ambiguity.

"It doesn't look like it will disappear tomorrow," he said. "With that uncertainty, we will continue to do things as fast as we can, but we also don't want to rush and over-promise."

Enta said that's where the Conti IFS unit will have an advantage with its solid North American manufacturing base.

"So we're not going to rely on shipping lanes and containers as much as others would be if they're importing into North America," he said "We just feel that's the best way to provide the best service and not only limit the risk of our own business, but the risk to our customers."

One of the most tangible impacts of VUCA has been the availability challenges and rising costs of certain raw materials.

That has led Continental to enact multiple price increases to the market, as have its competitors in the sector. Enta said customers have understood the situation of the rising prices, but that the raw materials costs accelerated faster than expected.

"We covered off as much as we could," he said. "We also tried to cover off from our productivity gains to bolster our customers. But the ramp-up of those raw materials happened so quickly we couldn't ramp up pricing as fast as we saw our costs ramp up."

Gerstenberger said it appears the prices in most raw materials may be plateauing, but the costs related to such things as energy, labor and transportation continue to climb.

He added that this isn't just an issue in North America, but to differing degrees in Europe and Asia as well.

Enta said the market in North America continues to grow, though the rate of growth has slowed. But the Conti IFS officials said some of the top line growth has been due to the price increases they've passed onto customers, something that is true around globe.

"But we've also seen growth in our volume too," Enta said. "It's not just price, but price has been a big part."