"Today we celebrate the growth and commitment of this plant and this community, with new investment and a physical expansion driven by growing demand for our products and, just as fundamentally, by this team's commitment to delivering innovation and superior quality for our customers here and around the world," Barry Owens, senior vice president of Bridgestone Americas Manufacturing Group, said in a statement. 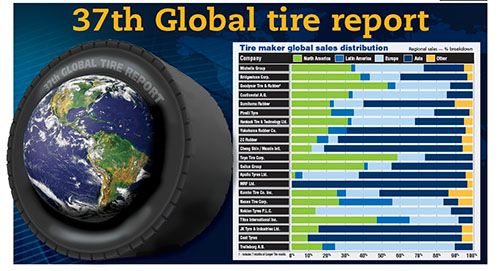 Bridgestone is ranked No. 2 in this year's Global Tire Ranking. To get the full 2022 ranking of tire makers, check out our data store.

In addition to the pre-cured truck treads, the Bandag facility in Abilene produces rubber cement and solvent packaging, servicing direct and indirect customers with the products.

With 200,000 square feet of manufacturing space already in Abilene, the expansion will add another 50,000 square feet, providing space for more equipment, another custom mixing line and the ability to run operations six days per week rather than five.

The mixing operations are expected to come online by January 2025. Capacity at the Abilene plant is expected to increase by about 16 percent, which is in line with Bridgestone's stated E8 commitments.

"Our company and our Abilene team have a vital role to play in the transformation of mobility brought forth by a desire of building greener retreads, while helping maximize fuel efficiency for fleets," Owens said.

The expanded Bandag operations checks the efficiency, ecology and energy boxes for Bridgestone.

The plant is one of four tread rubber factories Bridgestone Americas operates in North America. The others are in Chino, Calif.; Griffin, Ga., and Oxford, N.C.

Retread tires, the company said, offer both a bottom line benefit and an environmental advantage for truck fleets. Since 1957, Bandag has kept about 300 million tires out of the waste system, according to Bridgestone, saving about 4 billion gallons of oil along the way.

Retread tires can reduce material emissions, water and energy use associated with the production of a new tire.

According to Bridgestone and U.S. Tire Manufacturers Association, retreading of tires has the potential to:

The Nashville-based tire maker has been a vocal proponent of retreading and has backed a recent House Bill that would incentivize retreading by rewarding fleets that choose the technology.

The investment in the Abilene plant comes on the heels of two other major investments that the tire maker has announced in recent weeks. In the last month, Bridgestone disclosed investments in its North American operations that total more than $600 million.

With one of its largest U.S. capital investments to date, Bridgestone Americas said earlier this month that it will undertake a $550 million expansion of its truck and bus tire plant in Middle Tennessee.

The Warren County location produces premium Bridgestone and Firestone TBR tires for both on- and off-highway use in steer, drive and wide-base applications.

The major expansion for the Nashville-based tire maker will add 850,000 square feet to the 1.97 million-sq.-ft. facility, bringing the total square footage to about 2.83 million square feet.

Capacity there is expected to increase by 32 percent, the tire maker said. Current capacity at the plant is 9,400 tires per day.

Set to begin this fall and be complete by May 2024, the expansion also will add about 300 new jobs for the local Tennessee economy, Bridgestone said.

Total employment at the plant will increase from roughly 1,100 to 1,400, according to Bridgestone.

Bridgestone also has pledged to step up its efforts to bring more sustainable domestic rubber sources into its supply chain, saying last month that it would invest $42 million to help commercialize guayule rubber.

Bridgestone's guayule roots run deep, anchored in research and development efforts that began in 2012 when the company broke ground for its research center in Mesa, Ariz.

Since that time, Bridgestone has invested more than $100 million in its research and development of the alternative natural rubber and today operates a 281-acre guayule farm in Eloy, Ariz., in addition to its Mesa research facility.

Bridgestone Americas Inc. is the largest rubber products maker in North America, according to Rubber News' most recent ranking of North American Rubber Sales Leaders. The company's total rubber products sales—which includes both tire and non-tire products—came in at around $11.5 billion.

Globally, Bridgestone Corp. is the world's second-largest tire maker according to the most recent Rubber News data. The company reported worldwide sales of $22.17 billion in 2021.