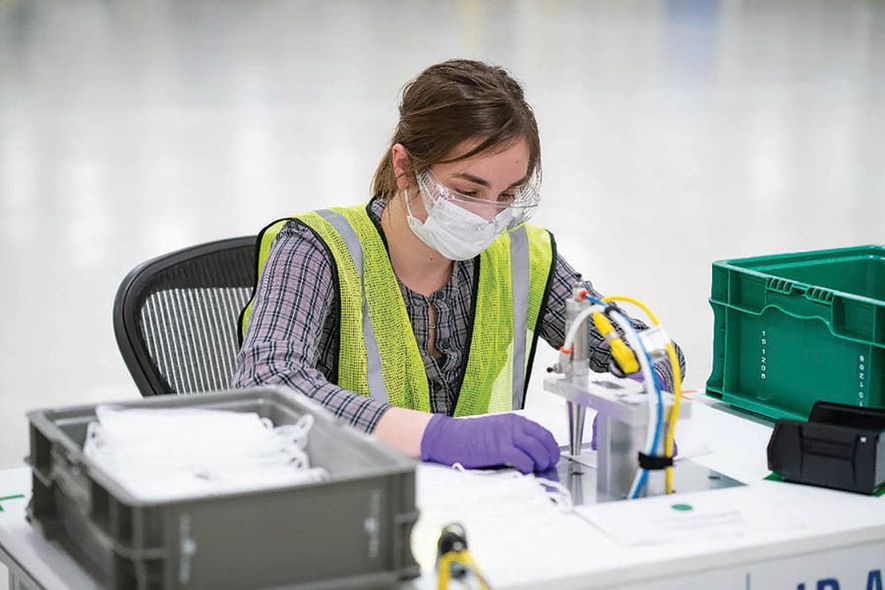 Photo courtesy of General Motors
General Motors expects to begin production of Level 1 face masks the week of April 6 at a plant in Warren, Mich. Th eplan is to ramp up to 50,000 masks per day in the first two weeks with the potential to increase to 100,000 per day.
Share 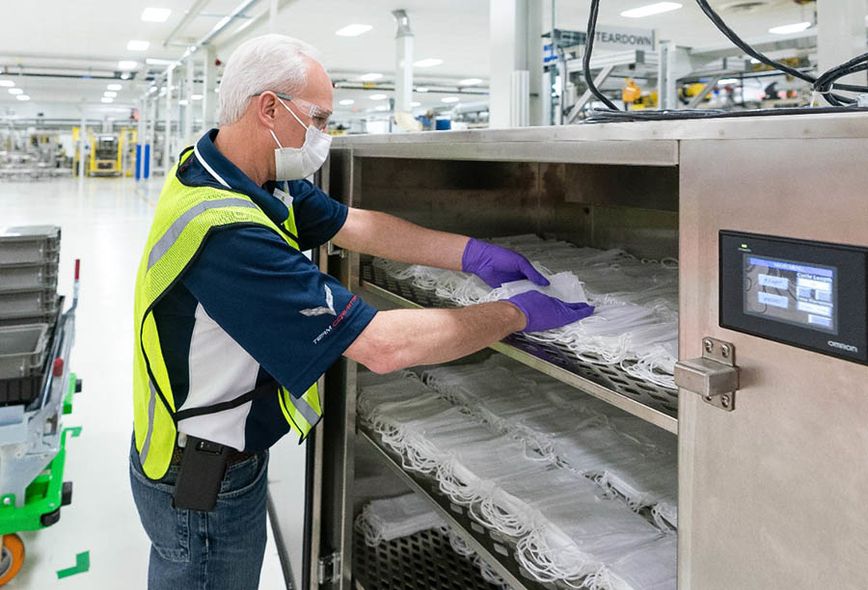 General Motors
General Motors expects to begin production of Level 1 face masks the week of April 6 at a plant in Warren, Mich. Teh plan is to ramp up to 50,000 masks per day in the first two weeks with the potential to increase to 100,000 per day.
Share 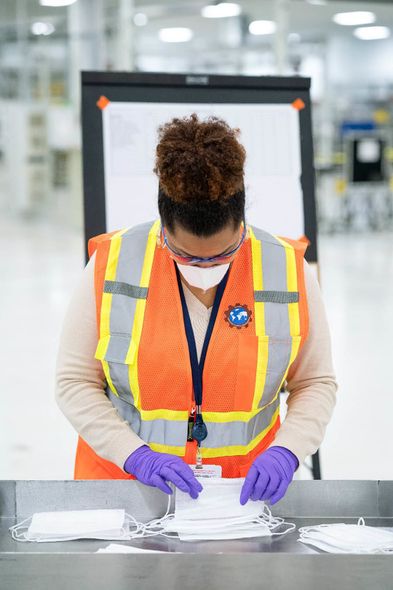 General Motors
General Motors expects to begin production of Level 1 face masks the week of April 6 at a plant in Warren, Mich. The plan is to ramp up to 50,000 masks per day in the first two weeks with the potential to increase to 100,000 per day.
Share 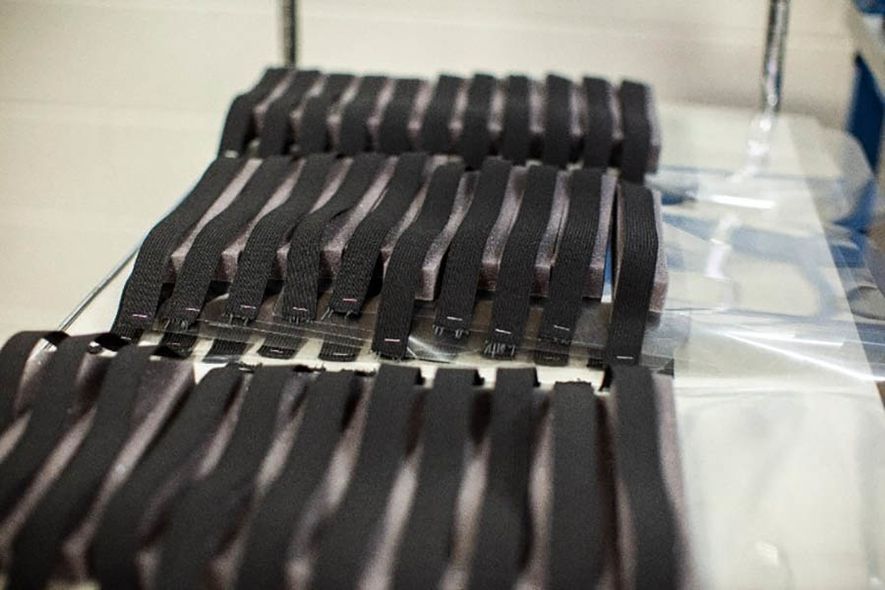 Ford Motor Co.
The medical face shields being produced by Ford Motor Co. consist of a plastic shield, foam forehead band, elastic strap and staples. The company is ramping up to make 100,000 face shields a week at its subsidiary, Troy Design and Manufacturing, in Plymouth, Mich.
Share 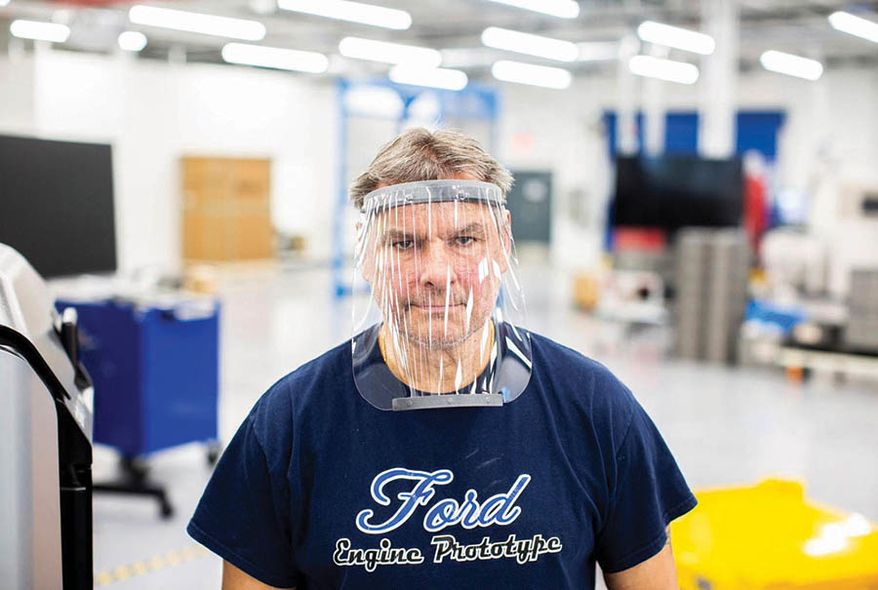 Ford Motor Co.
A Ford employee wears a prototype of a medical face shield as the manufacturer shows how it is bringing its manufacturing and engineering expertise to quickly expand production of urgently needed medical equipment and supplies for health care workers, first responders and patients fighting coronavirus.
Share 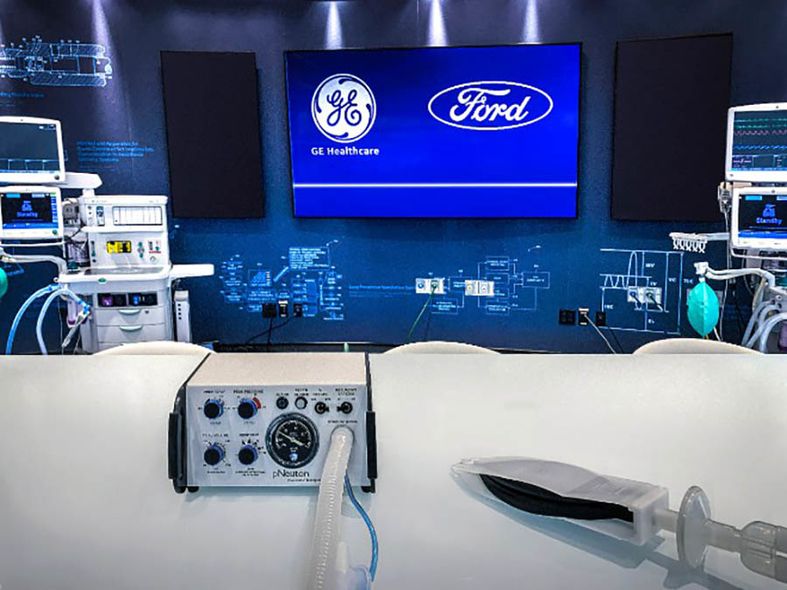 Ford Motor Co.
Ford plans to produce 50,000 ventilators during the next three months in a partnership with GE Healthcare. The company will make simple versions of a ventilator designed for GE by Airon Corp., to operate on air pressure instead of electricity.

The enemy is invisible. The battlegrounds are hospitals.

Health care workers struggle on the front lines without enough personal protection equipment as patients fight for their lives on precious few ventilators.

While the global pandemic caused by the fast-spreading novel coronavirus continues to take its toll on families, businesses and economies, an Arsenal of Health is mobilizing with hopes of helping on all fronts.

Similar to the buildup of military supplies for the Arsenal of Democracy during World War II, the Arsenal of Health is building up medical supplies to protect health care workers, combat the respiratory disease and save lives.

Once again, the effort is being led by auto makers redesigning their parts and factory lines to make the weapons to beat the enemy threatening individuals and livelihoods, according to Carla Bailo, CEO and president of the Ann Arbor, Mich.-based Center for Automotive Research.

But this time instead of tanks and guns, the ammunition needed includes masks, goggles, gowns, rubber and nitrile gloves, and ventilators.

"Think of all the elements of a car in terms of air supply and clean air," Bailo said. "They've got filtration systems, duct work, hoses and lots of electronic circuits and displays. And that all goes into making medical equipment. So how do you repurpose that, engage the supply base to get the parts, and set up an assembly line to do that?"

Bailo penned an opinion piece with Kristin Dziczek, CAR's vice president of industry, labor and economics, that was published widely March 17 to get the Arsenal of Health initiative going. "This is a war, but a different kind of war," Bailo said. "We've gotten a very big response."

One of the quickest contributions to the Arsenal of Health came from Ford Motor Co. and the United Auto Workers, partnering to assemble face shields for medical professionals, factory workers and store clerks.

Ford's design team came up with the transparent full-face shields to block the face and eyes from accidental contact with liquids, and limit exposure to the coronavirus when paired with N95 respirators.

A Ford subsidiary, Troy Design and Manufacturing's facilities in Plymouth, Mich., is producing the face shields with a ramp-up aimed at 100,000 units per week.

The face shields are "simple and effective," which is "the key to generate much-needed volume, quickly," Doug Geiss, a Ford supervisor, commented on his Facebook post showing the components.

"Believe it or not, getting enough elastic is the tricky part," Geiss posted.

He later told Rubber & Plastics News that a good source for 1-inch wide bands seems to be on board with the project.

Detroit-area hospitals and the New York Police Department were among the first recipients of Ford's face shields.

Here are some of the other ways manufacturers, suppliers and even the public are stepping up:

Ford plans to produce 50,000 ventilators during the next three months in a partnership with GE Healthcare. Production is expected to begin April 20 at the Rawsonville Components Plant in Ypsilanti, Mich.

The two companies said March 30 that they are working together to expand production of a simplified version of a ventilator. The devices, which essentially consist of a motor, pump, oxygen source, tubes and valves, force air into the lungs of patients having trouble breathing.

Ford will produce simple versions of the Models A-E ventilators, which were designed for GE by Airon Corp., and operate on air pressure instead of electricity.

"We found a design that was absolutely robust in terms of capability, something we believe we could scale quickly in terms of manufacturing, and it met the full needs of our frontline defenders in the war on COVID-19," Adrian Price, Ford's director of global manufacturing core engineering, said during a conference call.

Ford also is collaborating with 3M Co. to manufacture powered air-purifying respirators based on a new design that leverages parts from both companies.

"They'll produce what's being called a makeshift ventilator," Bailo said. "They're really pouring into their resources and vast supply base to make medical equipment. In doing so, they're engaging their purchasing teams and supply chain as well as their own power to do 3D printing. We're seeing 3D printing make a quick surge for face masks or cases for the makeshift ventilators or the connectors. A lot is happening in the 3D world to quickly support this."

GM will build ventilators designed by Ventec Life Systems at GM's manufacturing plant in Kokomo, Ind., as Ventec ramps up production at its facility in Bothell, Wash.

Ventec and GM developed sourcing plans for the more than 700 individual parts that are needed to build up to 200,000 units. The companies said they are poised to deliver the first ventilators this month as they ramp up to produce more than 10,000 ventilators per month.

Precision Associates Inc. of Minneapolis indicated it will make "several essential rubber components" for the ventilators.

Precision Associates President Brad Kadue could not get into specifics about the parts due to confidentiality, the company said. But the firm "has dedicated engineering, production, and tool-making resources to meet the accelerated production timeline," he said in a statement.

Precision Associates already molds rubber products for other ventilators and diagnostic equipment for laboratories conducting COVID-19 testing, the company said. "Our team continues to produce the high precision, tight tolerance parts that are the foundation of our 65-year reputation, but now we're doing it with the realization that our parts are helping to save lives," Kadue said.

GM also is manufacturing Level 1 surgical masks at its Warren, Mich., manufacturing facility. When it is ramped up, the auto maker said it plans to produce up to 50,000 masks per day with the potential to increase to 100,000 per day.

In addition, Fiat Chrysler Automobiles said March 23 it will manufacture and donate up to 1 million face masks per month to first responders. The masks reportedly will come from China until production begins in North America.

"We've marshaled the resources of the FCA Group to focus immediately on installing production capacity for making masks and supporting those most in need on the front line of this pandemic," FCA CEO Mike Manley said in a statement.

Manley also said that FCA's engineering and logistics team in Italy is assisting a local ventilator manufacturer, and FCA is talking with other companies about producing ventilators, other medical equipment and PPE.

A lot of individuals also are making PPE for health care workers. JoAnn Fabrics and Crafts stores is giving out free kits to make masks and gowns. The completed items can be returned to one of the company's 865 stores and then they will be donated to nearby hospitals.

Each kit comes with about a yard of fabric, thread and instructions. Many stores reportedly ran out of elastic for the masks and have transitioned to using a new pattern that uses ties instead. Each kit can make 12 masks.

According to the Centers for Disease Control and Prevention, these masks can be used for COVID-19 patients as a last resort to save PPE for health care workers.

Other retailers attempting to fill the void include Gap, Hanes Brands and Ralph Lauren, which all have shifted production lines from making apparel to manufacturing face masks, scrubs and gowns.

"You're seeing a lot of industries stepping up in myriad of ways to support and hopefully better contain the situation," Bailo said.