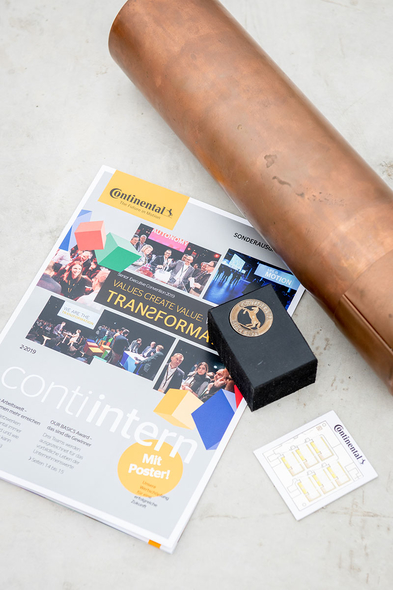 Continental A.G.
The contents of the time capsule: a piece of rubber from the tire production facilities, the latest Continental employee magazine and the core component of the electric vehicle power electronics developed and series-produced by Continental.
Share 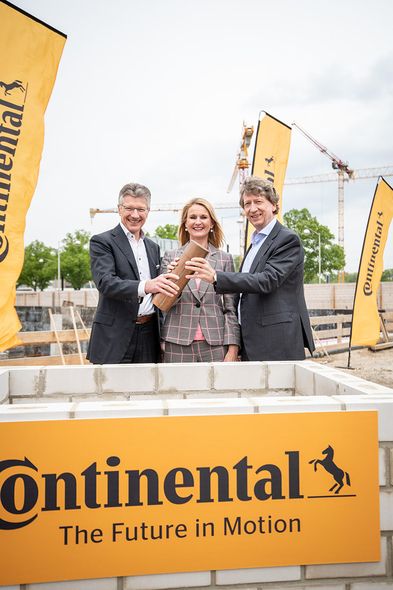 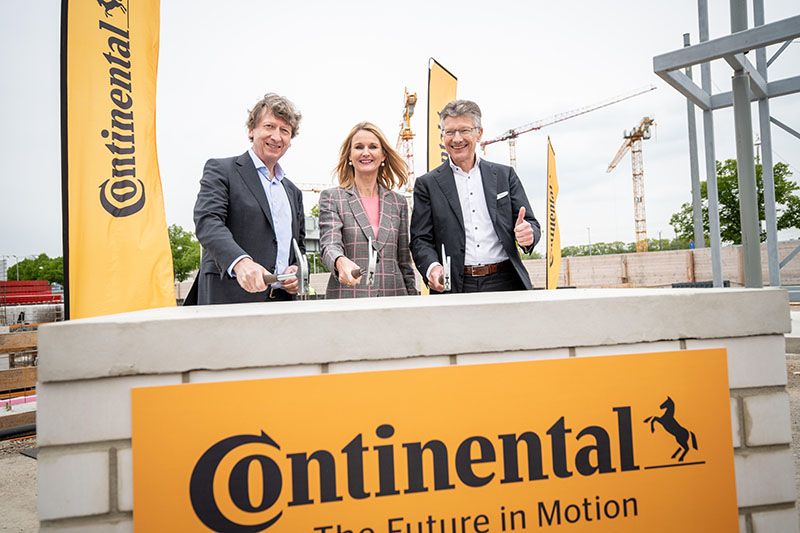 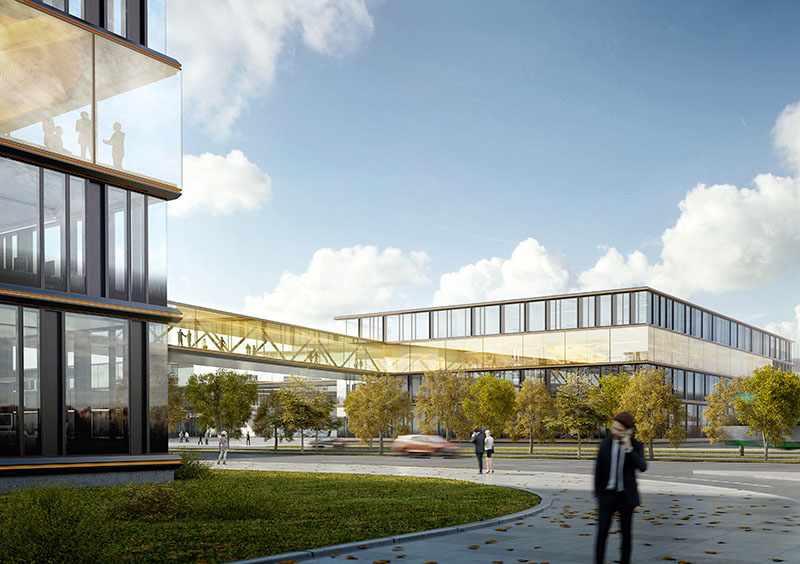 An artist's rendering of of the new company headquarters with a bridge spanning Hans-Boeckler-Allee.
Share 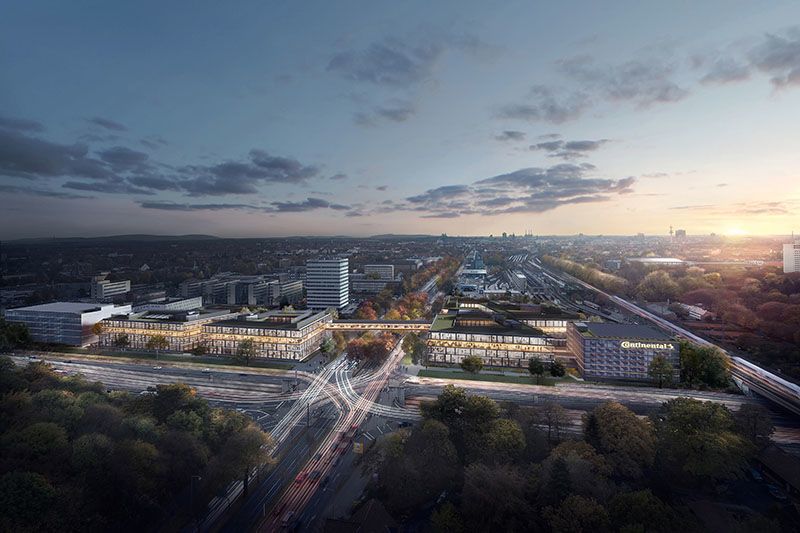 Continental A.G.
An artist's rendering of the Continental headquarters in Hanover. The buildings are set to open in 2021, the same year the tire maker celebrates is 150th anniversary.
Share 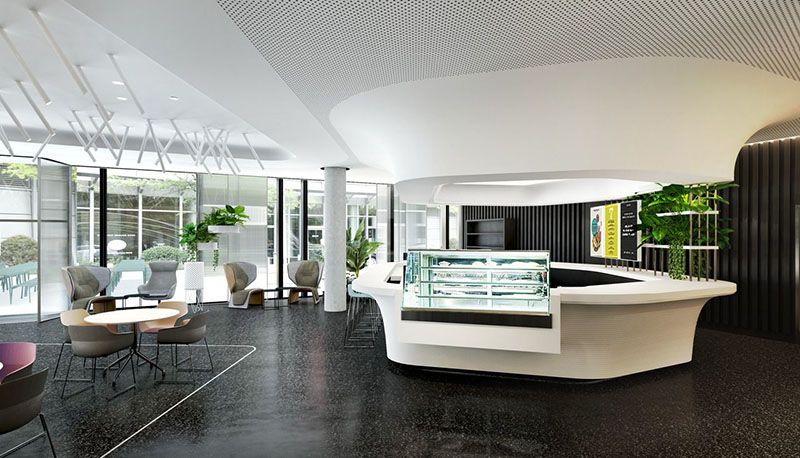 Continental A.G.
The new campus will include casual spaces for employees to meet and network.
Share 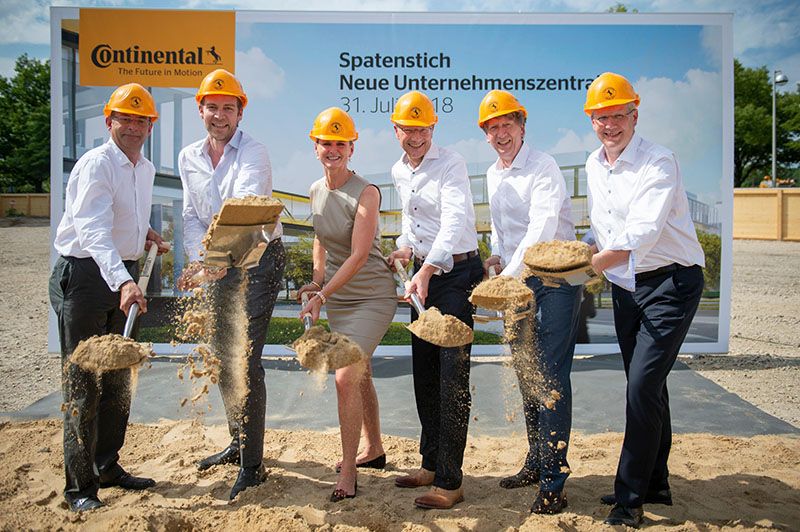 HANOVER, Germany—The work that Continental A.G. does today is the foundation that will allow it to achieve new heights tomorrow.

The Hanover-based maker of tire and rubber goods celebrated the construction of its new global headquarters as company officials laid a ceremonial foundational stone. Placed inside the stone was a copper time capsule that contained a piece of rubber from the tire production facilities, a copy of the most recent employee magazine and a core component of electric vehicle power electronics developed by Continental.

"These objects," the company said in a news release, "symbolize both the roots and the future of the technology company."

The project construction began in March and is set for completion in 2021, the year in which Continental will mark its 150th anniversary. Construction, the company said, is on schedule.

"The automotive industry is undergoing the biggest change it has experienced since its inception and we are doing our bit to shape this change," Continental CEO Elmar Degenhart said, "In doing so, we are undergoing our own change."

The new headquarters, designed by HENN, a Munich-based architectural company, will comprise multiple buildings across two campuses on the north and south sides of the Hans-Boeckler-Allee highway. Pedestrian overpasses will connect the two campuses, the longest of which will span the highway.

The new facilities will have enough space for 1,600 workers, but initially will house 1,250 Continental employees who will work together in an open-workspace environment to foster collaboration and communication.

To help employees acclimate to the new space, Continental has built a special test space, dubbed the Workspace Lab, at its current company headquarters. The 3,350-sq.-ft. furnished lab simulates the spatial concept, giving employees time to acclimate to their new work environment.

"In the future, we will work and collaborate differently," Degenhart said. "We will give our employees greater flexibility. We will help them to organize their own working patterns and collaborate across divisions. To achieve this, we will be optimizing their workplaces. Our corporate culture and our four values are the foundations for this."

The new headquarters are designed around the idea that Continental's employees comprise a small community. Its facilities are designed to meet the needs of the employees in many of the same ways that a city would support its residents.

The new headquarters will feature two parking garages, which will have parking for bicycles as well as cars. Its buildings will feature green space, a health center, in-house daycare and spaces for networking and meeting.

"It will have connecting sections and areas where people can get together, just as cities have their streets and plazas," Degenhart said. "And just as cities have houses, our new headquarters will have areas for retreat and concentration. This is how we promote networked, flexible and trust-based work and our spirit of togetherness."