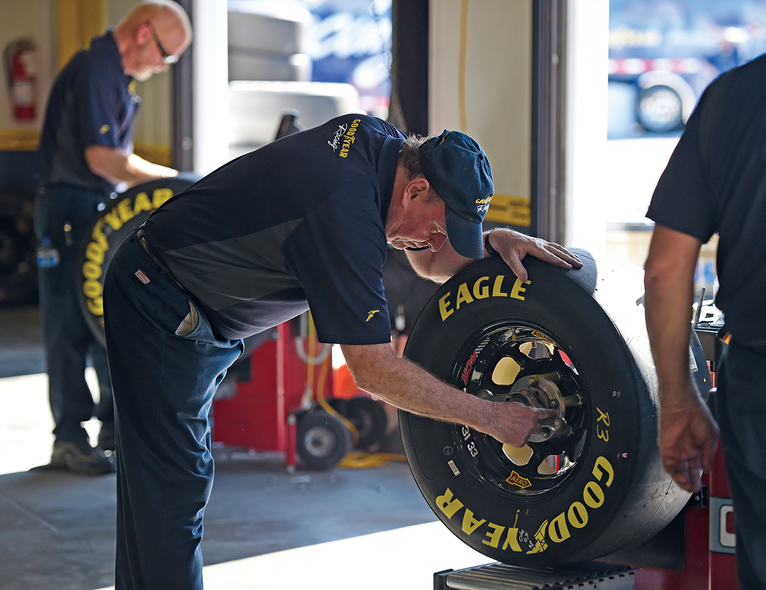 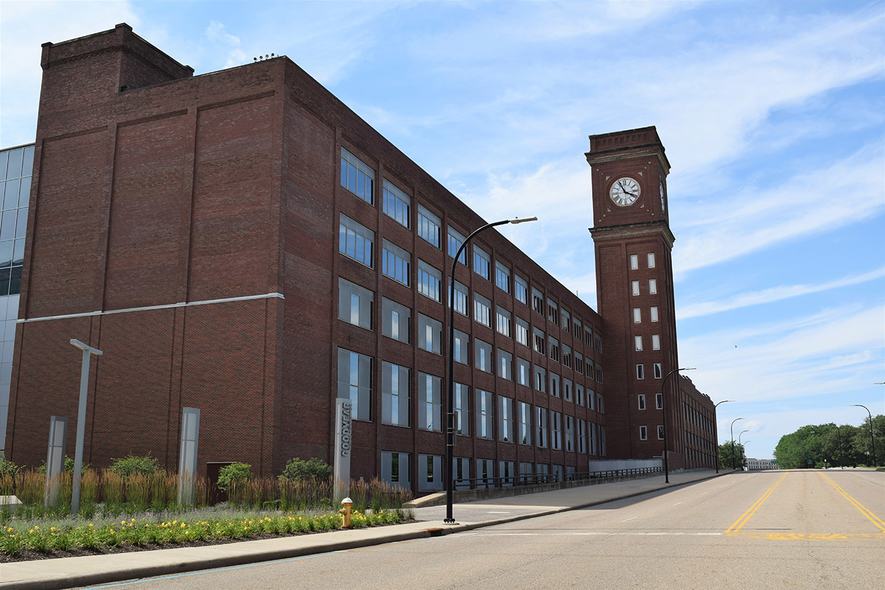 A look at the Goodyear Innovation Center Manufacturing.
Share 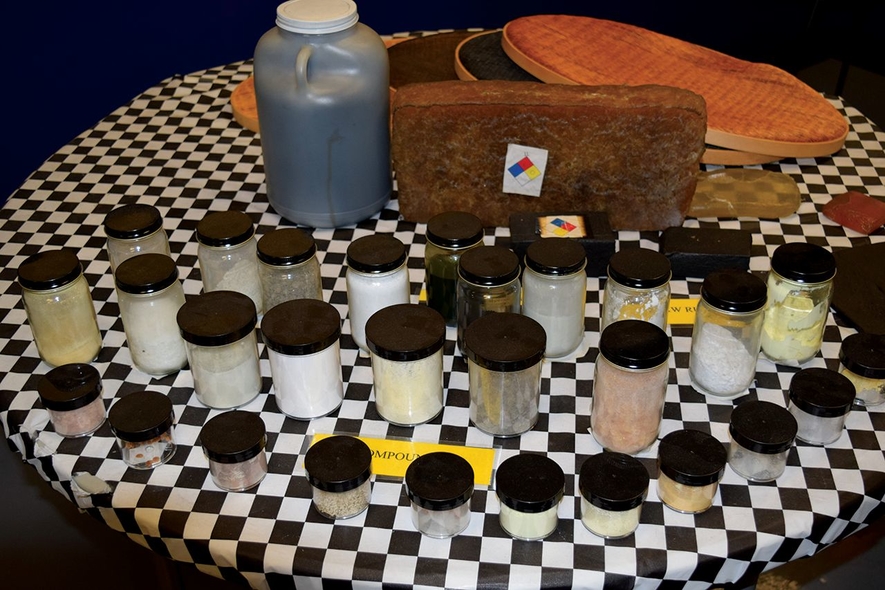 A look at some of the materials that go into a Goodyear race tire.
Share 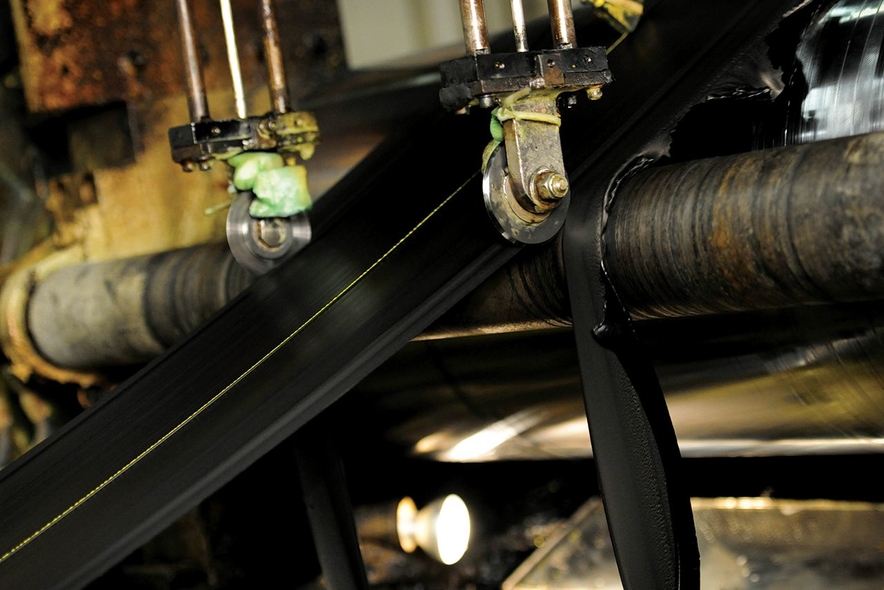 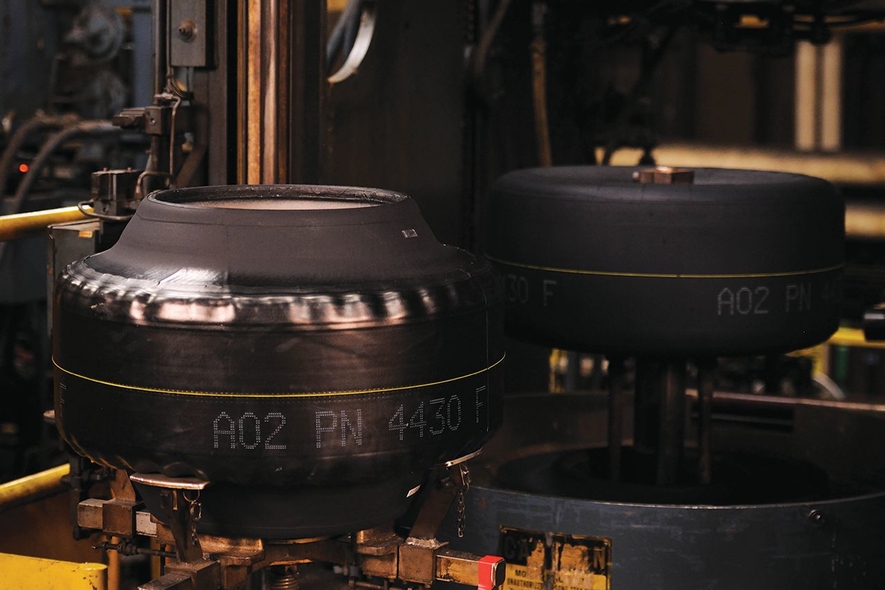 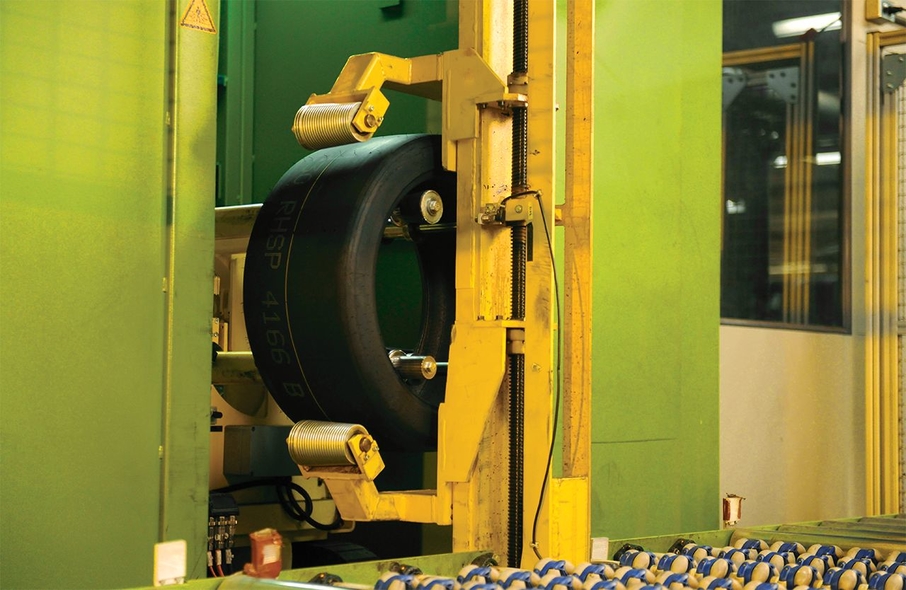 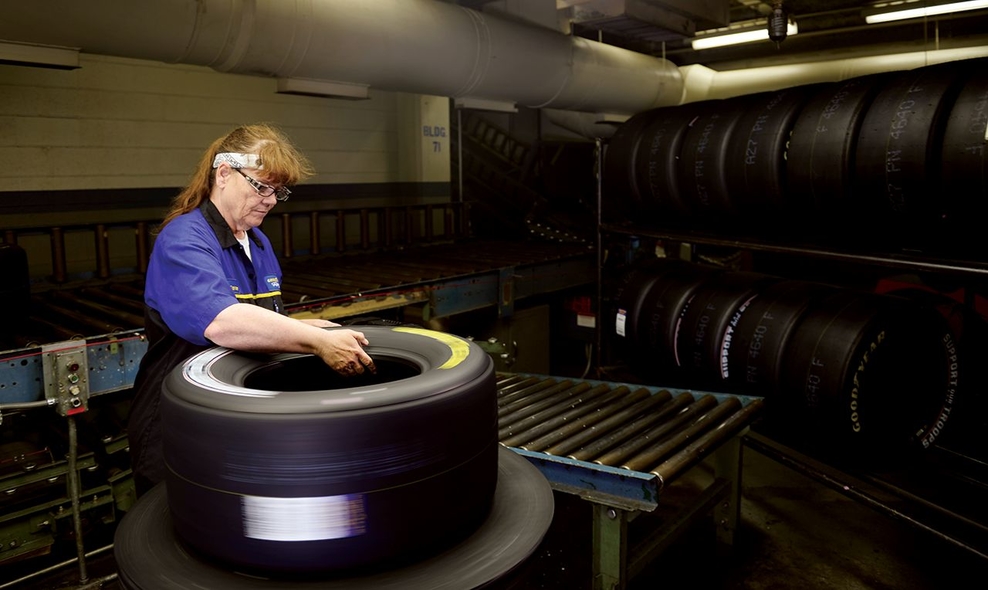 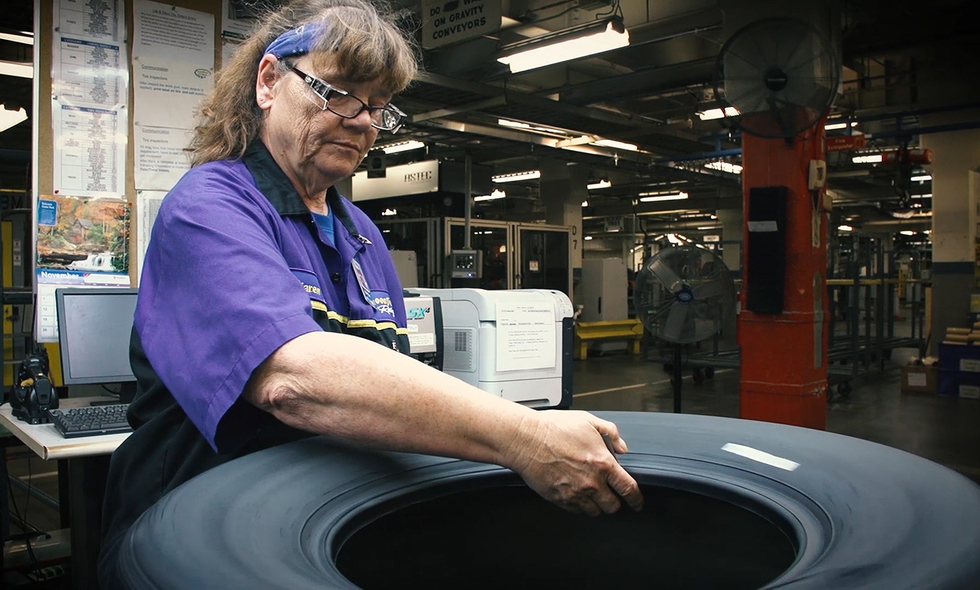 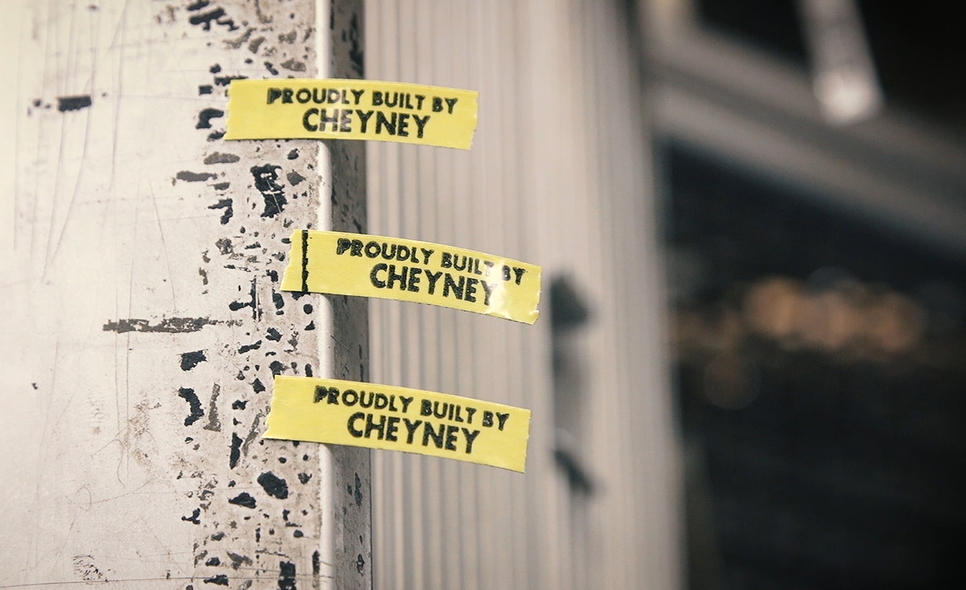 Owen Cheyney is one of those who puts a stamp of workmanship on the Goodyear race tires.
Share 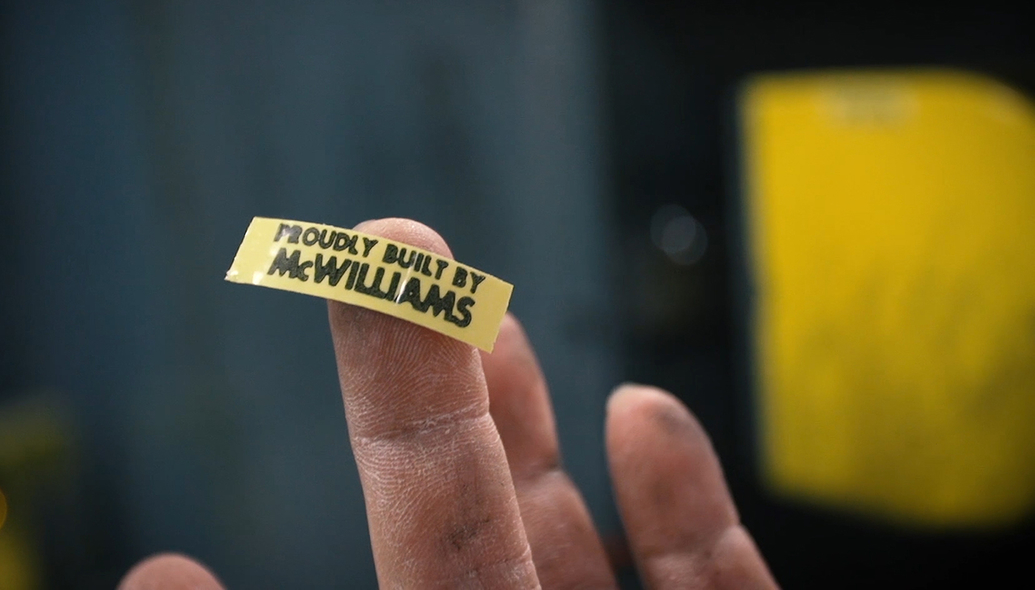 Scott McWilliams is one of those who build Goodyear race tires.
Share 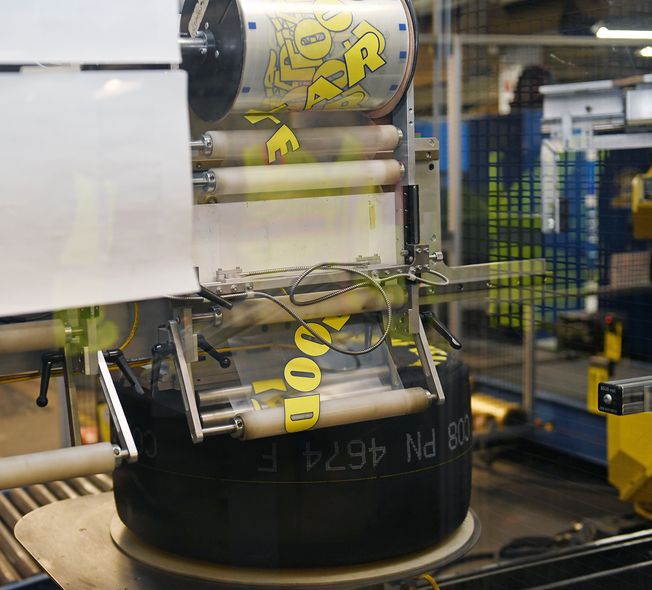 The Goodyear logo stencil is applied to the sidewall of the race tires.
Share 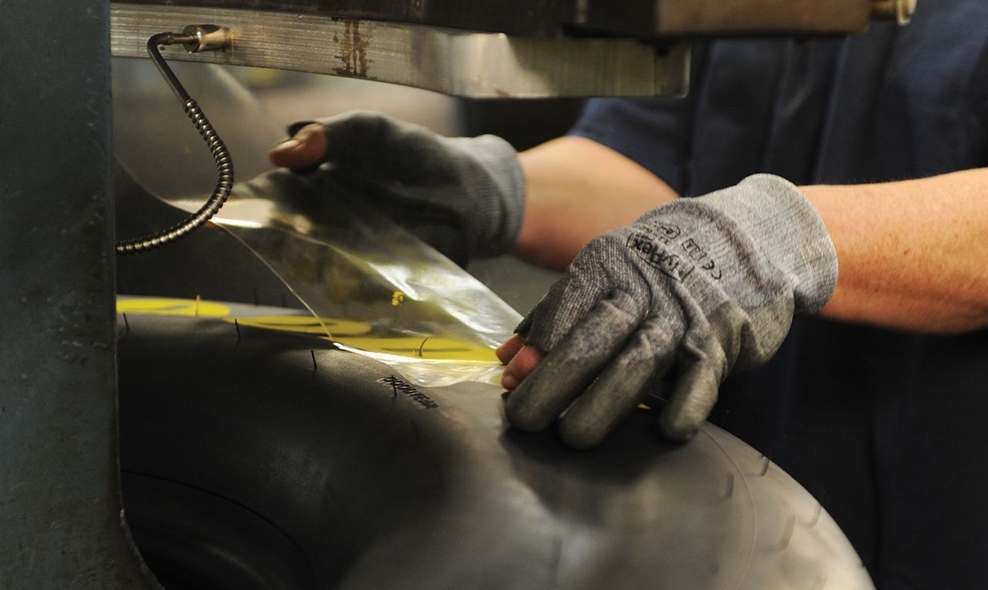 The Goodyear logo decal is applied to a tire.
Share 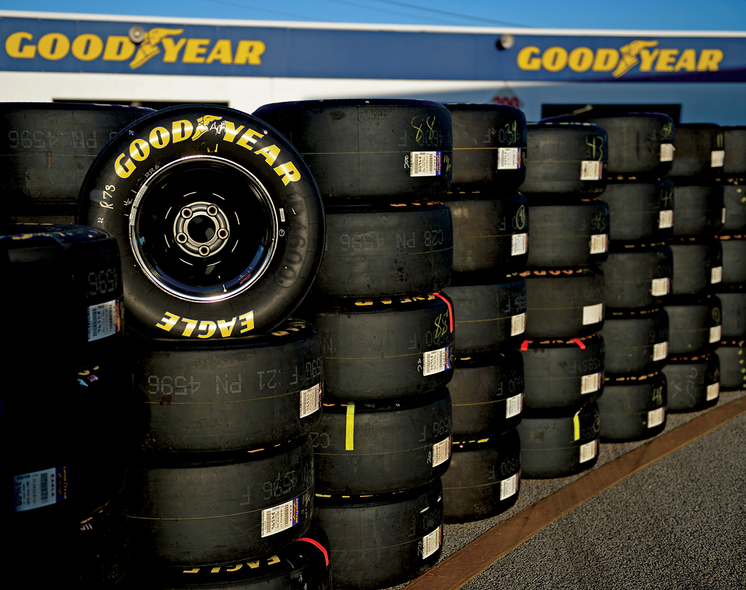 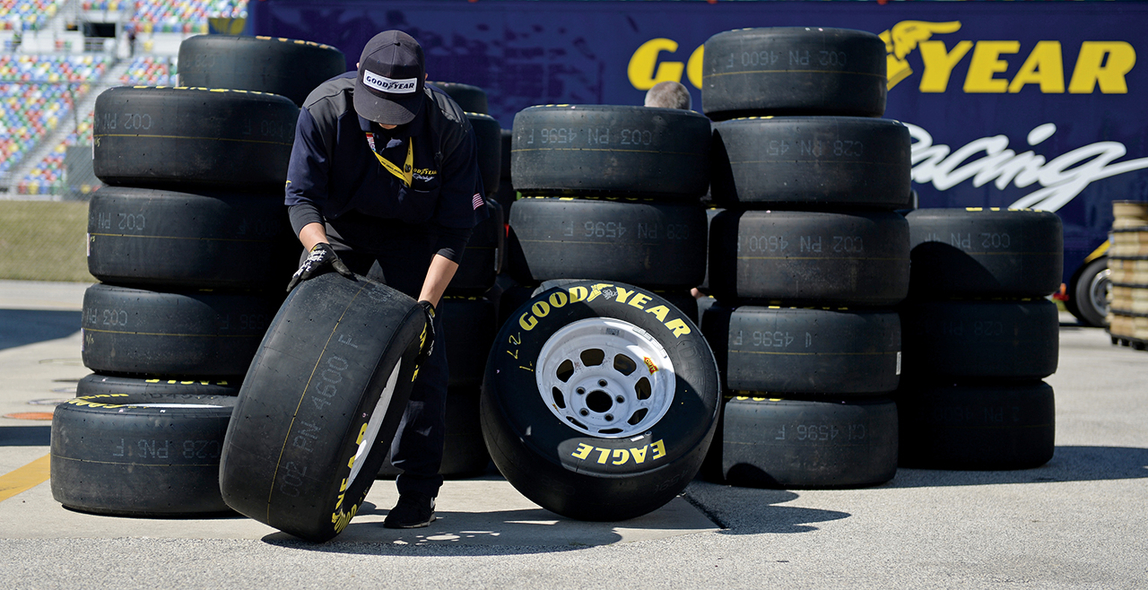 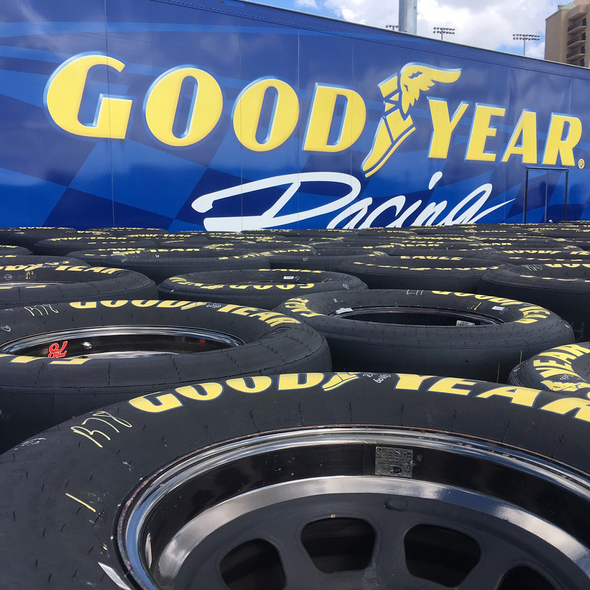 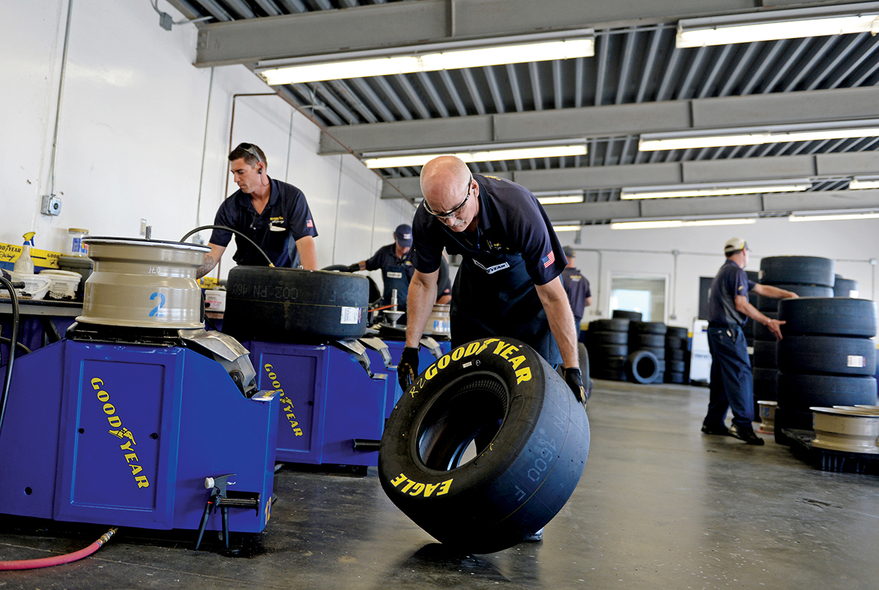 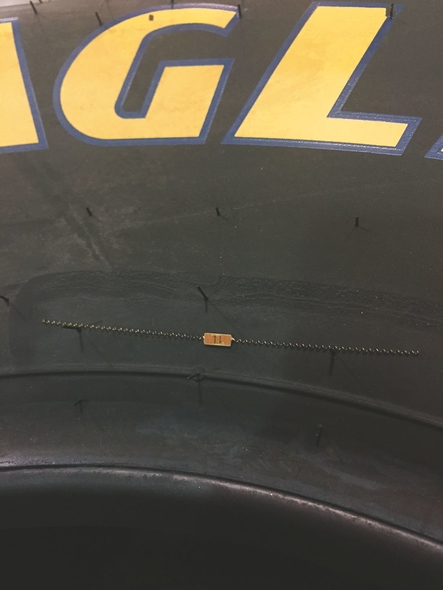 Goodyear embeds a radio frequency identication (RFID) chip in the sidewall of each NASCAR radial tire to track the tire throughout its life cycle.
Share 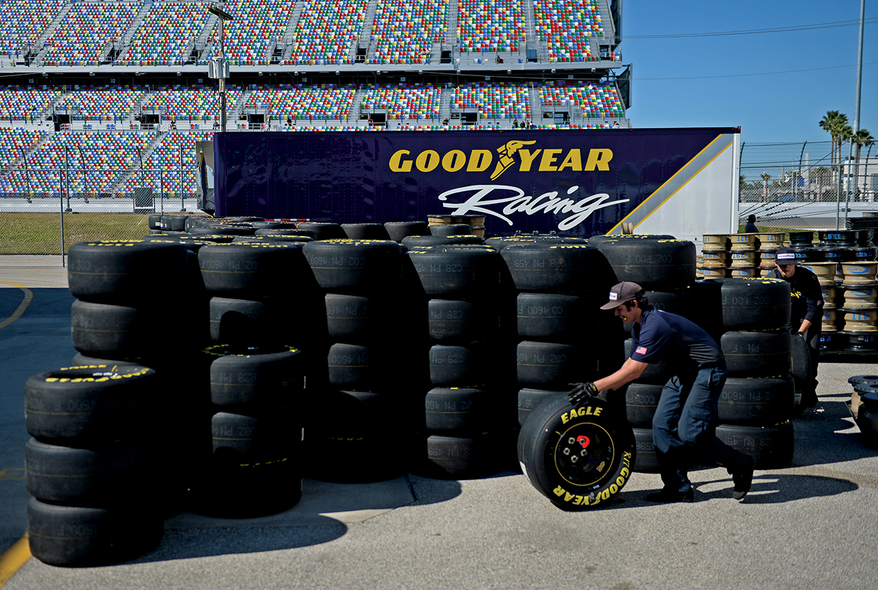 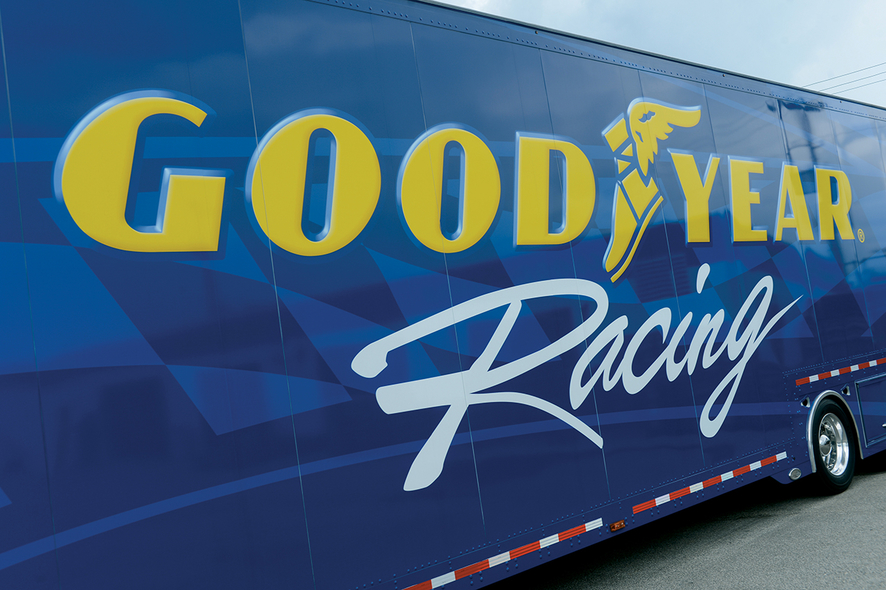 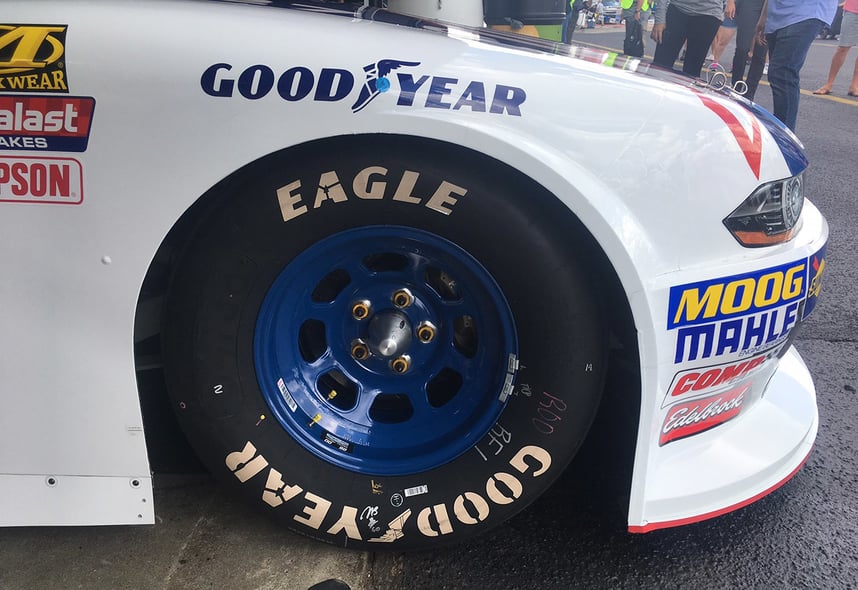 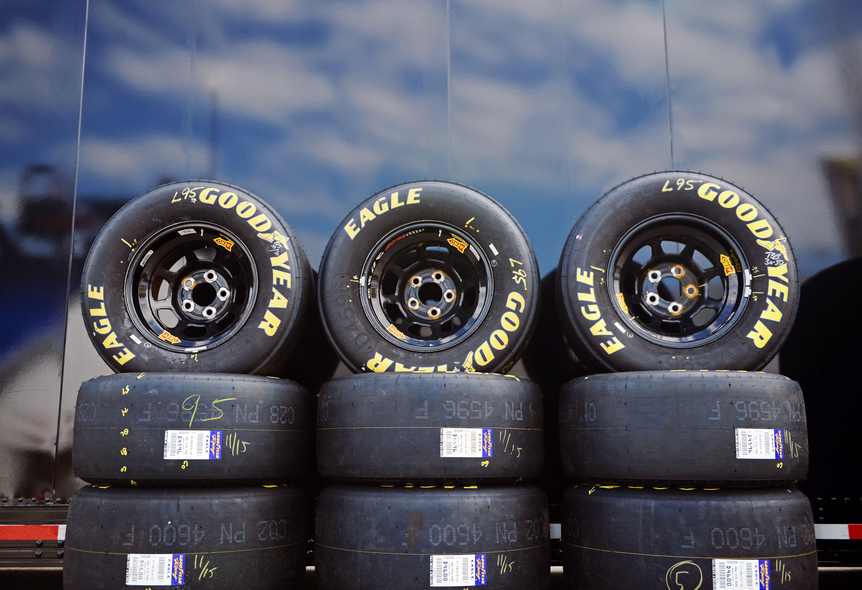 AKRON—The first thing you sense while you tour the Goodyear Innovation Center Manufacturing facility in Akron is the enormous amount of pride, workmanship and know-how that goes into each of the 4,000-plus racing tires that are produced during peak weeks of the NASCAR season.

Each of the nearly 400 employees, most members of United Steelworkers Local No. 2, seems to take ownership of his or her part of the process, be it engineering the compound, constructing the rubber plies, stamping the tire, inspecting the final product repeatedly or delivering it to the desired race track.

The point is illustrated best by perhaps these two facts:

While being the sole tire provider for the NASCAR circuit—it's been that way for 21 of the 64 years that Goodyear has been involved with NASCAR—Goodyear said the sponsorship not only benefits its employees, but it also helps promote its brand worldwide.

According to Goodyear, its brand is tops in awareness with consumers: When purchasing tires, the company said, consumers think Goodyear first.

A big part of that success, Goodyear said, is its sponsorship of NASCAR, which puts on 90-plus races each year.

"We're obviously endemic. We're what touches the track, what makes the thing go. It's a challenge, it's fun. It's almost a weekly test, or a weekly evaluation of our performance and what the guys do in the factory.… A lot of thinking, a lot of work, a lot of passion goes into those tires, literally."

That passion was rewarded recently. Goodyear's Akron plant was one of four manufacturing facilities to earn a 2018 Excellence Award from the Association for Manufacturing Excellence, which recognizes plants that have demonstrated excellence in manufacturing and business, while acknowledging continuous improvement, best practices, creativity and innovation.

AME highlighted the plant's safety reporting system, a closed loop system and a Goodyear best practice that focuses on identifying near misses and analyzing events, as well as its operational excellence in leadership, workplace culture and employment.

The plant, located in a former commercial-scale tire plant built in 1916, also makes tires exclusively for the National Hot Rod Association (NHRA)'s top three classes. Late last year, Goodyear and NASCAR announced a deal that continues Goodyear's designation as the official tire of NASCAR through 2022, extending a relationship that started in 1954.

"It's our brand out there, it's our tire out there every week, and we can have a significant impact on the results of the races, whether it is competitive or not a competitive race," Greg Stucker, director, race tire sales and marketing, said. "We're a serious part of the competition. We take that very seriously."

That seriousness was on display recently when Goodyear invited several members of the media to a four-day event that included an up-close look at Goodyear's race-day activities during the Consumer Energy 400 at Michigan International Speedway, a ride with a former professional driver in a Camaro ZL 1 equipped with Eagle tires at Goodyear's test track, and a tour of the ICM adjacent to the company's Akron headquarters.

The process begins with a mix of raw materials, dozens of ingredients blended together for a unique compound that chemical engineers determine is optimal for each event's racetrack. The components of the tire then are put together, such as the bead, sidewall, body plies, belts, overlay and tread.

Skilled Goodyear technicians build the tires meticulously, applying layers of individual nylon plies and rubber from a machine by hand as the tire takes shape. A laser inspects each ply to ensure it has been assembled correctly.

Next, the tech embeds a label with his or her name, forever attaching his or her workmanship to the final product—and ultimately, the tire's performance. A radio-frequency identification (RFID) chip that can be read by a handheld scanner at the track, also is installed on the sidewall. The RFID allows the Goodyear team to track the tire's performance from cradle to grave, so to speak.

"You kind of think about technology in two different fashions: Tire technologies, and it's those things beyond tires," Stucker said. "Our RFID is a critical piece of that. It's a conduit of information."

Stucker said the developing RFID technology is a key to transmitting all types of data in years to come.

"There are plenty of sensors out there that we can track temperature and duty cycles," Stucker said. The challenge, he added, is "to use RFID technology to make a smarter tire to feed into all the data acquisition onboard the race cars and create that continuous loop that give us and the team an avenue to connect all the information, all the data, to make better real-time decisions on what's going on at that race track.

"It's in the development process, but RFID is going to be a key to transmitting all of that information as we look ahead."

Once the tire is constructed, the product goes through the curing process, where it is exposed to high temperature and pressure in the mold.

Tires are trimmed, inspected by hand, and the yellow "Goodyear Eagle" lettering is applied. The finished products then go through an X-ray machine—operated by a dedicated technician working in an enclosed office—that looks for any abnormalities such as an air bubble or foreign object. That rarely happens, but when it does, the tire is re-inspected to determine whether the product can be salvaged.

Tires get one final look from a human inspector. Once certified, they are shipped to a Goodyear warehouse in Cornelius, N.C., where they are mounted, then transported to the appropriate site for the corresponding race.

Once at the track, Goodyear said each team uses between nine and 14 sets of tires per race weekend, depending on course track and length. At NHRA events, tires are changed after every pass down the dragstrip.

"If you consider the demands of racing, it's a very fast-paced, competitive environment," Stucker said. "It truly is an ideal proving ground for a lot of different technologies."

Right-side and left-side tires, each with different characteristics, are produced each week. Stucker said the formula for constructing a successful tire has two parts: compound and construction.

Chemical engineers are looking to mix the compound that provides the best traction with minimal heat. While traction makes the car build and maintain speed, it also causes heat that accelerates its life cycle.

"Heat is one of those things we watch very closely, as do teams," Stucker said. "It becomes a balance between traction and heat to achieve the right amount of longevity with the tire itself. It's a highly tuned, complex balancing act to get the right combination of traction and heat."

The tread compound is based on whether the tire is a left- or right-side unit. Left-side tires, built for optimal traction, are always smaller and more nimble, Stucker said, "to create the stagger that we need to help the cars turn left."

Race teams tend to generate a lot of grip out of left side, he said, so they become aggressive with air pressure and suspensions settings, "so our tire has to be able to sustain that."

The compound for the right-side tires needs to be tougher. "That's where more of the duty cycle lies in the tire setups so you'll find the right-side compounds harder than the left," he said. "From a design consideration, you have to sustain very high loads and lot of weight transfer as you go through the track.

"The focus is between the two, making sure we're addressing the individual performance characteristics of both left- and right-side tires."

"We can turn things around a lot quicker than most areas of the company. We stress things quite a bit more than other tires made," Stucker said. "We run at pretty hostile environments under very severe conditions, so we can put a lot of different things through the paces. Materials is one of the areas we focus on consistently."

Stucker said being the sole tire provider of NASCAR provides a unique challenge for Goodyear.

"Everybody is always trying to take it to the next level, trying to push the envelope to get faster than the other guy," he said. "...We're a little more conservative than you would be if you were in competition with another tire company. You don't push the envelope as much as you would if you were competing against Pirelli or Michelin or Firestone. We have to make sure we have a package that is suitable to the whole field.

"It also has to have enough market that those guys can push it. We are trying to stay in tune with them, staying on top with what they're doing, what the sanction body is doing from the rules perspective, making sure all that works together to create a good package, make sure nobody goes too far beyond the boundaries of what we are creating."

Again, he said, it all comes down to its factory workers, who build the tires 24 hours a day, five days a week.

"We do this because we love it."