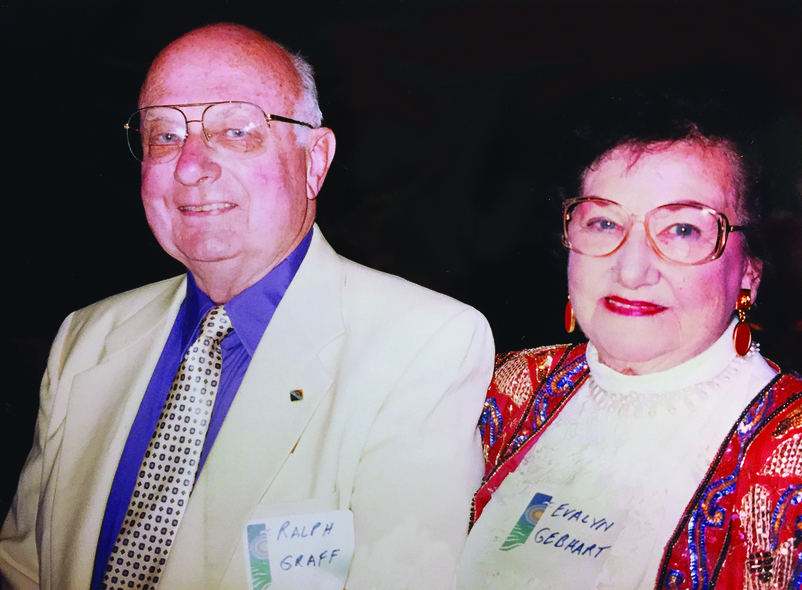 Ralph Graff with his longtime partner Evalyn Gebhart. She preceded in death.
Share 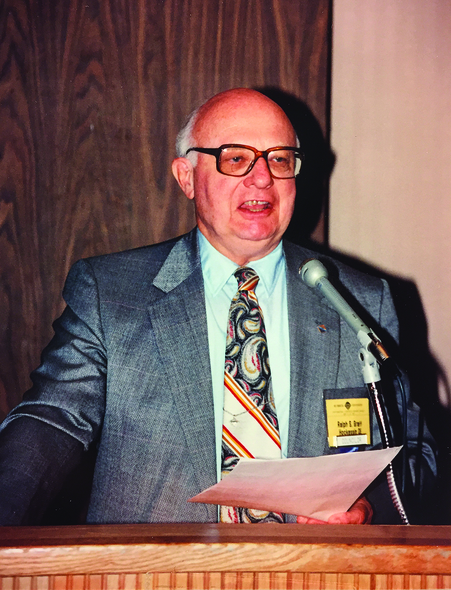 Ralph Graff spent about 40 years at DuPont in his rubber industry career, and volunteered with the Rubber Division for 7 decades. He died in May at age 94.
Share 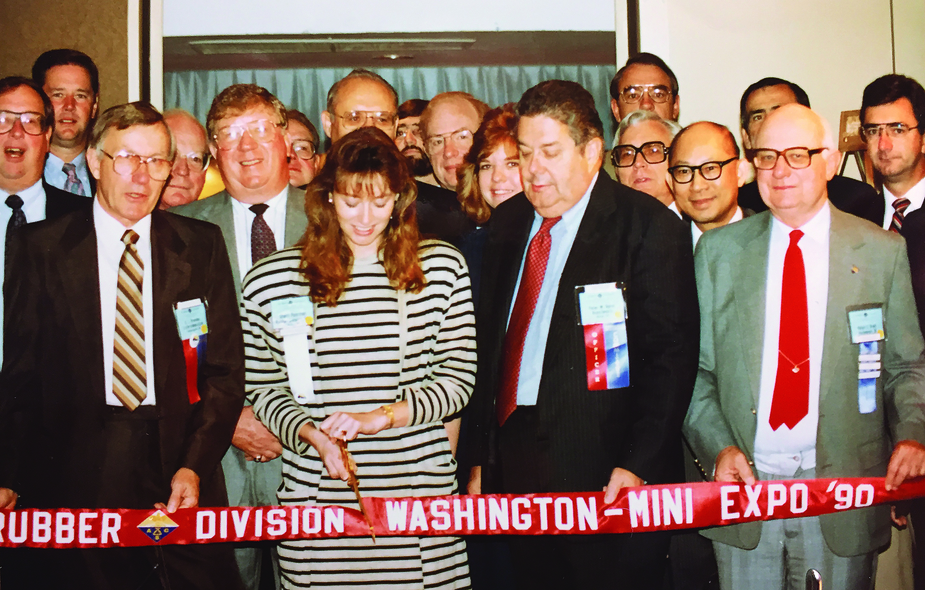 Ralph Graff (right) was hand to help cut the ribbon at many Rubber Division expos over the year. Here he is at the opening of the 1990 expo.
Share 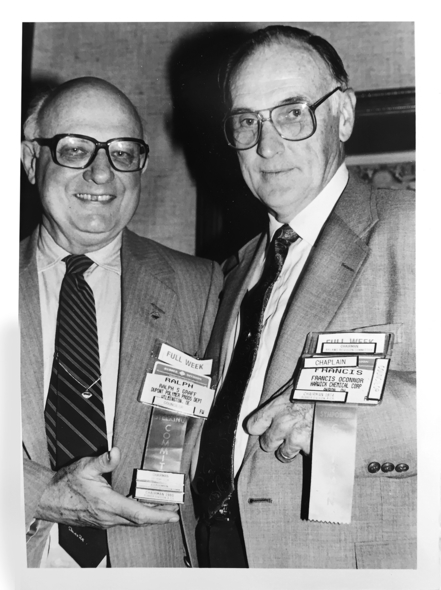 Ralph Graff and Francis O'Connor show off the various ribbons and badges they earned to display with their badges at the 1987 Rubber Expo. O'Connor, of Harwick Chemical Corp., also died this past spring. 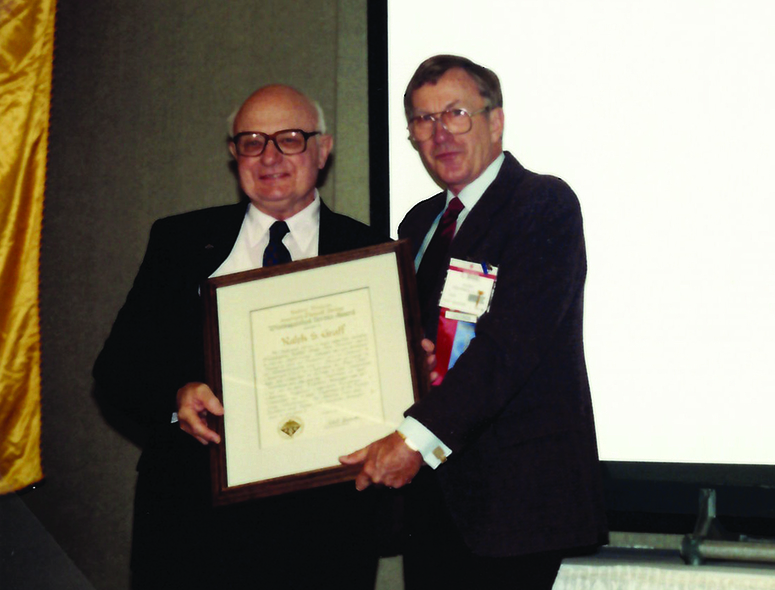 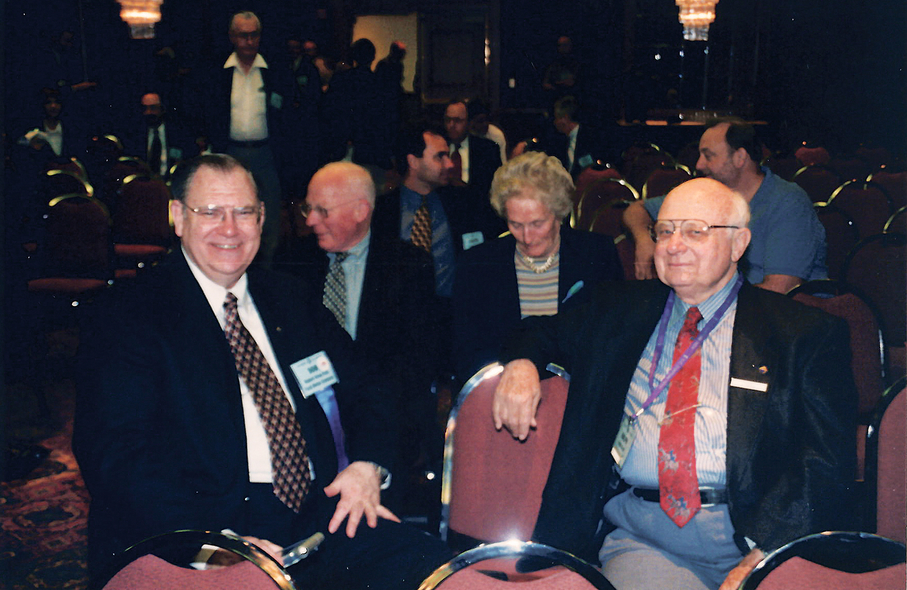 Bob Pett (left), retired from Ford Motor Co., and Ralph Graff from DuPont both were longtime supporters of the Rubber Division. They both served as division chair and councilor, among other activities. Pett said only a few knew what Graff did behind the scenes to help negotiate better deals at meeting sites for the technical association.
Share 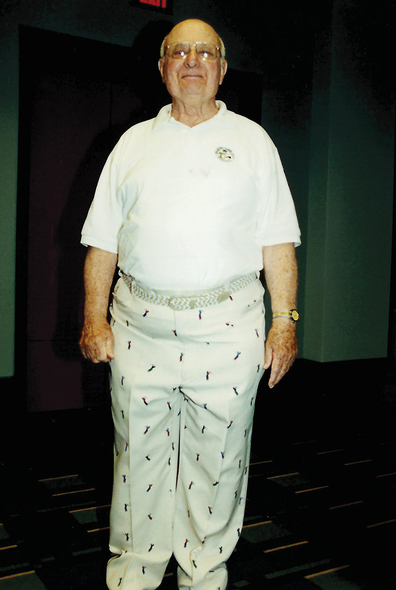 Ralph Graff was known for wearing some outfits (particularly sports coats( that made him stand out in a crowd. Here is dressing the part for a golf outing in 2002.
Share 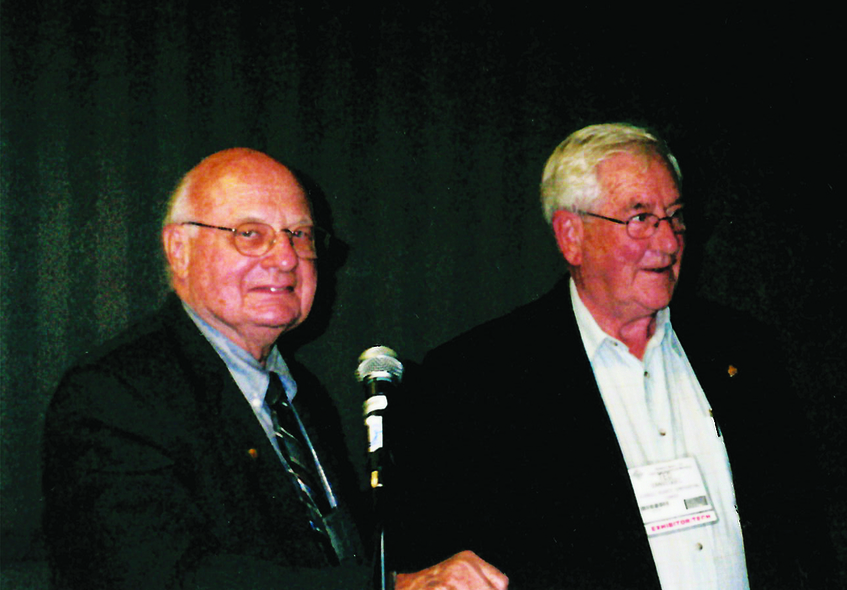 Ralph Graff helped found the 25-Year-Club of the ACS Rubber Division. Here he is with Ted Van Geggel of AirBoss, who won the club's countdown as having the most years in the industry at the fall 2004 club luncheon.
Share 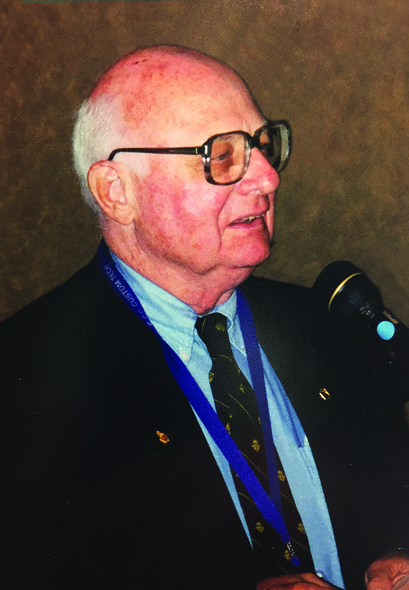 Ralph S. Graff died this past May. As far as I know, there was no official notification of any sort from the company where he'd spent a career, or the organization to which he was devoted.

That's not really surprising: A quiet passing of a 94-year-old guy who'd outlived many whose lives he'd touched.

Ralph deserves better than that. He wasn't a captain of industry or renowned rubber scientist. But the work he did on behalf of DuPont, and especially for the Rubber Division of the American Chemical Society, had real significance.

At DuPont, Ralph did not invent thermoplastic elastomers nor the many materials springing from that polymer. His job was downstream, and also of vital importance. He'd been head of market exploration of elastomers for DuPont, and was intimately involved—and proud of—his work in helping convince the Detroit auto makers to adopt TPEs in vehicles.

He started in the industry earlier, at Goodyear in Akron, after serving in the U.S. Army in World War II. Ralph was a member of the legendary Goodyear Flying Squadron, a rapid response team made up of typically young, recent college grads, who would be deployed wherever the company needed help. The participants gained a very broad, practical education about rubber.

Ralph also joined an organization based in the Rubber City that would have a major impact on his life, and he on it—the Rubber Division.

I met Ralph in 1979, at a Rubber Division meeting in Cleveland. Ernie Zielasko, founder of this publication and its editor/publisher at the time, introduced Ralph as a personal friend, and a supporter of the business newspaper. Ralph had held many positions with the division and was its chairman, essentially its CEO.

He quickly became a go-to guy for me, the new Rubber & Plastics News managing editor, for background on many rubber industry subjects, from science to business to personalities. He knew the history of the business, living through much of its glory years, and certainly everything concerning the Rubber Division. And he wasn't stuck in the past.

A little later Ralph and I were discussing the value of face-to-face networking, which the Rubber Division provided at its technical meetings and trade shows.

The division was riding high at the time. Lots of participation and record membership. Ralph predicted a major change was coming, a new form of electronic communication, a way to network globally and instantly. This new thing would give companies pause about spending the time and money to send people to a convention, when they could do it in a cheaper, faster fashion. The Rubber Division needed to prepare to address that change, Ralph said.

I told him I had never heard of this new "thing." He said it will affect the news business, too, and you need to be ready for it. Ten years later the internet exploded on the scene. I spent the rest of my career hearing about how we "had to figure this out."

Ralph probably was more well-read than prescient about the coming Worldwide Web. But he didn't merely parrot what he'd heard. He'd extrapolate on what might come, using his years of experience in the rubber industry.

Ralph had deep knowledge and appreciation of the Rubber Division's role. When I first met him, the organization was a volunteer-run organization, except for a tiny staff of women who officially were employed by the University of Akron, headed by Marge Bauer.

Change is the only constant, and in the coming years the Rubber Division got a lot of it. Consolidation and cutbacks in the tire and rubber industry, sometimes resulting from recession, other times because of the industry's own unique woes, hit the business hard. Consolidation, plant closings and layoffs cut rubber industry employment, and membership in the business' pre-eminent technical association fell.

The volunteer model of running the organization was failing. Revenue slipped from the exhibition that funded most activities, and a lack of accountability, especially concerning costs, plagued many of the division's committees. The group's hierarchy decided it was time for a more business-like approach, and hired an executive director.

Ralph wasn't happy about all this. He loved the old traditions and many social events of the Rubber Division. However, he always had one foot in the past, the other in the future, and recognized why changes were being made. He was a realist. He stayed on for many years as a division councilor—essentially a representative—to the American Chemical Society.

He'd held a number of other posts within the division over the years. None pleased him more than being in charge of the 25-Year-Club luncheon, which occurred at every conference. The "old guys" would gather for libations followed by an often raucous lunch, replete with much embellished storytelling. Ralph would be master of ceremonies, introducing the person who would talk to the audience about the meeting site, and leading the "countdown" where the participants would find out who in attendance had the most years in the rubber industry.

Ralph did that job for 17 years, before he bequeathed it to John Deputy.

Besides industry backgrounders, Ralph when asked would fill me in on the whys and what-fors of the division's behind-the-scenes activities. He'd differentiate between fact and his own opinions, and helped me gain a perspective about why things happened in the division.

Here are some examples.

The Rubber Division members elected their officers. It had a long-standing approach whereby people moved up the officer ranks until they ran for chairman-elect. The winner of that contest would be chairman a year later.

It always was a forgone conclusion who would win the election—the person who had come up the ranks. We jaded journalists would refer to the other candidate as the "designated loser." Typically it was someone who didn't want the big job, and agreed to take one for the team. No animosity about it, either—it just seemed more democratic to have two candidates.

One year the designated loser won, much to his surprise. No one in the division would talk about it. I asked Ralph about it later, and he explained the members who voted were unhappy when the treasurer and assistant treasurer revealed the division's troubled financial condition, something that helped lead to the end of the all-volunteer management approach. He also predicted the assistant treasurer, painted with the same vindictive brush by members, would never run for the top office.

I'd heard there was controversy over the selection of a particular Charles Goodyear Medal winner. Not big news, but it piqued my interest. Ralph eventually explained it all: The winner was an academic, quite popular and accomplished, but not particularly an inventor or discoverer of something of great importance in the rubber industry, which was what the Charles Goodyear Medal was all about.

Ralph, of course, had been involved in award selections. He gave me an excellent tutorial on how the division went about this. Awards had to be earned.

Purely academic people were not selected as Charles Goodyear Medalists after that. One year no one was named recipient of that honor; Ralph told me none of the candidates met the tough requirements.

Ralph was an amiable soul, and had an excellent sense of humor. He was very devoted to his wife, Ann, an invalid when I first met him. After her passing in 1987, Ralph and his longtime companion, Evelyn, were a fixture at division meetings.

And here, even if you knew Ralph, is a bit of trivia you may not be aware of. In his biography, Ralph listed journalism as a hobby. He'd been editor of his high school yearbook in Johnstown, Pa.,

On one occasion he played an important role in one of RPN's issues. For the Rubber Division's 75th anniversary, Ernie Zielasko wanted to produce a comprehensive issue on rubber chemistry and the role of the rubber chemist. He called on Ralph as an adviser on the issue's content, and he was glad to help. Ralph even contributed a column for the issue, which Ernie—me, too—considered our best during his tenure as RPN editor-publisher.

Ralph called me out of the blue a few years after I left RPN, just to see what I was up to. He was over 90, Evelyn had passed away, and he was living in an assisted-living place that he liked. His mind was as sharp as ever, and we talked about a wide variety of topics. It wasn't just reminiscing, either.

That was Ralph, considerate and always inquisitive. I'm glad I knew him.