Bruce Meyer, Rubber & Plastics News
Capt. Mark Kelly took time after his talk to have his photo taken with numerous attendees. Here Kelly poses with John Pope of Anco International Inc., who got the astoronaut to autograph a copy of Kelly's bestselling children's book, "Mousetronaut."
Share 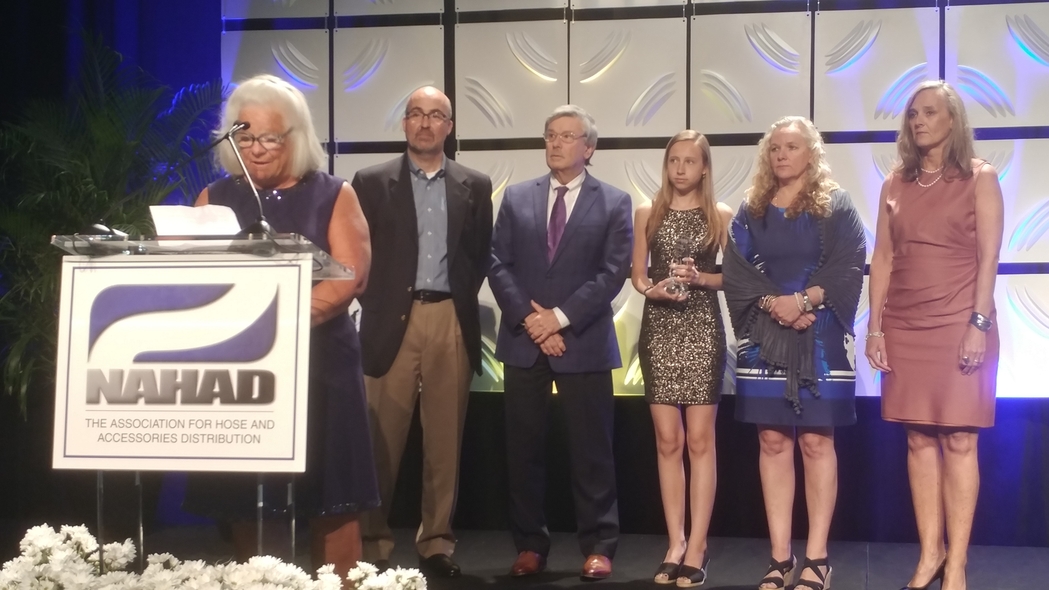 Bruce Meyer, Rubber & Plastics News
A highlight of the luncheon was the awarding posthumously of the George W. Carver Outstanding Commitment to Industry Excellence Award to Robert Mitchell, former CEO of Omni Services Inc. His family, including a daughter who works at Omni, was on hand to accept the honor on his behalf.
Share

Bruce Meyer, Rubber & Plastics News
During the Manufacturers Hospitality Night, Roy Pyle of Jason Industrial and his wife pose with the greeting committee at the party hosted by Eaton Corp.

SAN ANTONIO—One of the highlights of the second day of NAHAD's 2017 convention in San Antonio was the keynote address of astronaut Mark Kelly, the retired U.S. Navy captain, also the husband of former congresswoman Gabrielle Giffords, who survived a January 2011 assassination attempt.

NAHAD delegates gave Kelly a standing ovation following his hourlong address, which was equal parts inspirational, poignant and humorous. The veteran of four trips to space told stories of how he actually was a poor pilot when he first began his flight training, along with a harrowing account of what it's like to bring the space shuttle in during re-entry—basically piloting a "fireball" that has to be flown like a glider.

Kelly also recounted some of the events that have happened since the attempt on his wife's life, an attack which left six others dead. When Giffords was still in the hospital, Kelly received a phone call from U2 lead singer Bono, who told him he found his photo of the singer and congresswoman. Kelly said he knew the photo well, because his wife had the photo of her and Bono on her office desk, while having no photos of her and Kelly displayed. "Needless to say, I didn't invite him to the hospital to visit," Kelly quipped.

The astronaut also told of the bravery his wife showed in returning to Congress to cast her vote on the controversial bill to raise the debt ceiling to keep the federal government open. He said it was the one moment that brought Congress together, with his wife showing tremendous courage "just to do her job."

He closed with a statement Giffords asked him to read from her to the NAHAD attendees: "Be bold, be courageous and be your best."

Another highlight of the luncheon was the awarding posthumously of the George W. Carver Outstanding Commitment to Industry Excellence Award to Robert Mitchell, former CEO of Omni Services Inc. His family, including a daughter who works at Omni, was on hand to accept the honor on his behalf.

And the day ended with the Manufactuers Hospitality Suite night, where the producers of hose and other accessories used in the industry entertain their distributor customers.