BIRMINGHAM, Ala.—For the multi-billion-dollar Motion Industries, any potential acquisition—and there have been many to begin the year for companies in the rubber and fluid power world—must have three essential ingredients if it is to come to fruition.

Such was the case for Bloomfield, Conn.-based Kaman Distribution Group, purchased Jan. 3 for $1.3 billion by Motion, as KDG was deemed to be beneficial, align strategically and fit culturally with Motion's mission.

"Anytime we consider an acquisition, we look at three critical issues that must be met, no matter the business size. (And) KDG has many talented people that will be great additions to the Motion team," Randy Breaux, president of Motion Industries, told Rubber News in a March 4 email. "Our culture at Motion is void of arrogance, bureaucracy and complacency. Also, we believe in being fair, ethical, inclusive and invested across the whole business with our team members, customers, supplier partners and stakeholders." 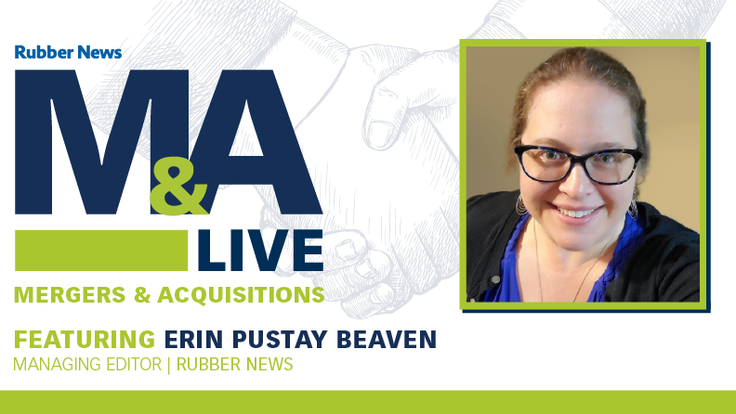 Who is buying? Who is selling? What factors are shaping the M&A market today? As a subscriber, you get more answers.

"In the case of KDG, there absolutely was a strategic fit because we were both selling similar products but to different groups of customers," he said, adding Motion concentrates on larger national customers, while KDG focuses on smaller regional customers.

"So, bringing the businesses together made total strategic sense," he said. "KDG similarly met those requirements."

The company employs about 9,000 across the globe and is a wholly owned subsidiary of Genuine Parts Co.

"Combined, Motion and KDG will bring more engineered products to our customers in fluid power and automation," Breaux said. "We believe this is one of the acquisition's key benefits and look forward to expanding opportunities to serve all of our customers."

Breaux said bringing KDG on board also will boost Motion's presence in core industrial products and in technical automation spaces, such as precision engineering.

"It's a very exciting time. This transformative move will be highly beneficial to everyone involved, especially for customers of our combined entities," Breaux said. "Our customer service will be the best it's ever been with deepened and expanded capabilities."

Whether all 1,700 KDG employees will be folded into the Motion family remains unclear, though the KDG brand itself has a concrete timeline for assimilation into Motion.

"We have a schedule for the name and brands to migrate away from KDG/Kaman to Motion," Breaux said.

Specifically, the Kaman Fluid Power group will become Mi Fluid Power Solutions in the first half of 2022.

The Kaman Automation business already is "being blended with and will migrate to" the Motion Ai automation group.

"And the Kaman Industrial Technologies bearings and power transmission locations will merge with the Motion branch network and become Motion later this year and next," Breaux said. "So, by the end of 2023, we expect all brands and references to KDG/Kaman to go away and become part of Motion and our brand strategy. KDG's private brands are now part of the Motion portfolio."

Breaux said business is steady-as-she-goes for Motion, which was founded three-quarters of a century ago as Owen-Richards, the names of the U.S. Marine Corps and U.S. Navy veterans who opened the industrial parts supply company in 1946.

As the company turn 75 this year, the integration with KDG "is moving along quite well," Breaux said.

"Everyone at Motion and KDG is energized about the opportunities that this acquisition brings," Breaux said. "Customers are on board and see that Motion and KDG are stronger together than separate.

"We look forward to continuing to lead in the industrial distribution industry."